Niles veteran lived out his dream in the Marines 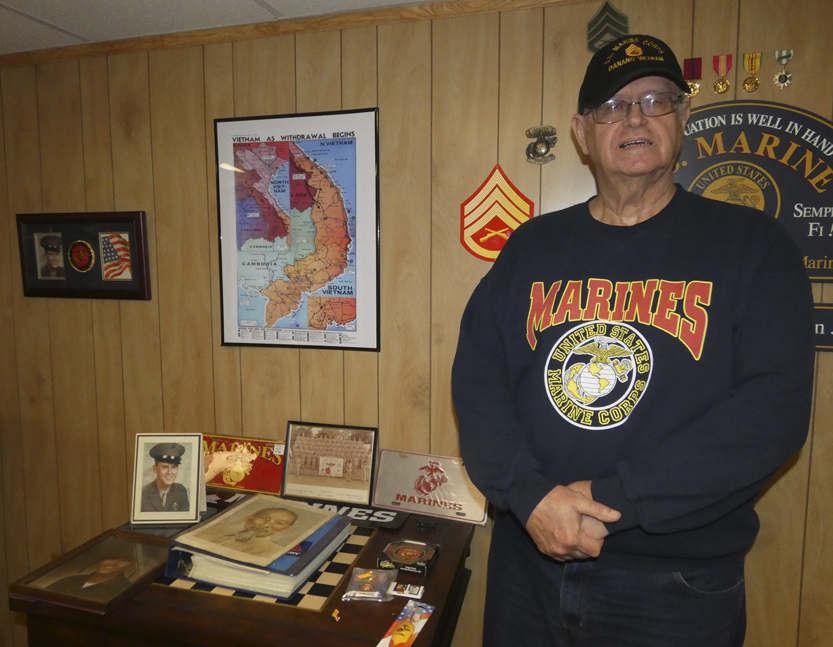 Tribune Chronicle / Raymond L. Smith Kenneth C. Werden Jr., 71, of Niles, said he is proud of the time he spent in the Marine Corps. He enlisted in 1967 and after basic training, was sent to fight in the Vietnam War.

Werden fell in love with the image of a tough-as-nails drill instructor on Parris Island molding an impressionable young Marine Corps recruit into a man. Then in March 1967, in the midst of the the Vietnam War, Werden fulfilled that ambition and volunteered.

“I wanted to serve my country,” Werden said.

Boot camp was everything Werden imagined and more. It was tough, grueling and tested his limits. In fact, he almost didn’t make it.

“There was one test where we were supposed to be able to identify each of the rank emblems on uniforms,” Werden said. “There were some ranking bars, such as the lieutenant bars, where the only difference are their colors.

“I knew I was in trouble because I’m color blind,” Werden said. “However, when the tester questioned my drill sergeant whether I was color blind, he said I definitely was.

“The hardest part during that period was telling my mother I would be going to Vietnam,” Werden said.

After some additional training, Werden was sent to Da Nang, Vietnam, in September 1967. He was assigned to the 1st Marine Division, 7th Marine Regiment.

“I thought it was a beautiful country,” Werden said. “Seeing the people and the rice paddies was nothing I had seen before.”

It wasn’t until later that first night when he heard the constant firing of M-16 rifles and the sounds of machine gun rounds that it sunk in he was in a war zone and his life would be in constant danger.

Werden and other new Marines were quickly initiated in daytime and nighttime raids, which eventually would become a nearly daily part of his time in Vietnam.

Almost from the beginning, Werden began writing letters back home about what was happening to him and the many thoughts and feelings he was experiencing. It was his way to keep in contact with family and organize his thoughts.

Unbeknownst to him, Werden’s sister, Kathy Cvetkovich, was keeping all of his letters. The letters formed the backbone of an extensive diary of his time in the war.

When the unit was assigned to Liberty Bridge, their job was protect the construction engineers, Seabees, and the bridge they were building.

“The North Vietnam Army and Viet Cong were trying to blow the bridge up all the time,” Werden said. “They were setting up booby traps and harassing the builders. We took a lot of casualties during the three months we were there. It was one of the worse areas during my tour.”

The battalion went from one hot spot to another on search-and-destroy missions or on major operations. They also went on long treks up into the Qui Son Mountain Range and the mountains around Charlie Ridge, where the North Vietnam Army was traveling from the Ho Chi Minh Trail to strike out at U. S. military installations in the Da Nang area.

The unit took a lot of casualties from constant engagements with enemy forces.

“It was pure hell,” Werden said.

Today, at 71, Werden’s time in the Marines has in many ways shaped his life. His home is filled with memorabilia that includes his medals, flags, scrapbooks and other momentoes of the period.

“I have great pride of my service in the Marine Corps and Vietnam,” Werden said. “I was 19 when I enlisted and 21 when my tour of duty in Vietnam was over. I literally went from a young boy to a man. There is no question in my mind that I would do it again in a heartbeat.”