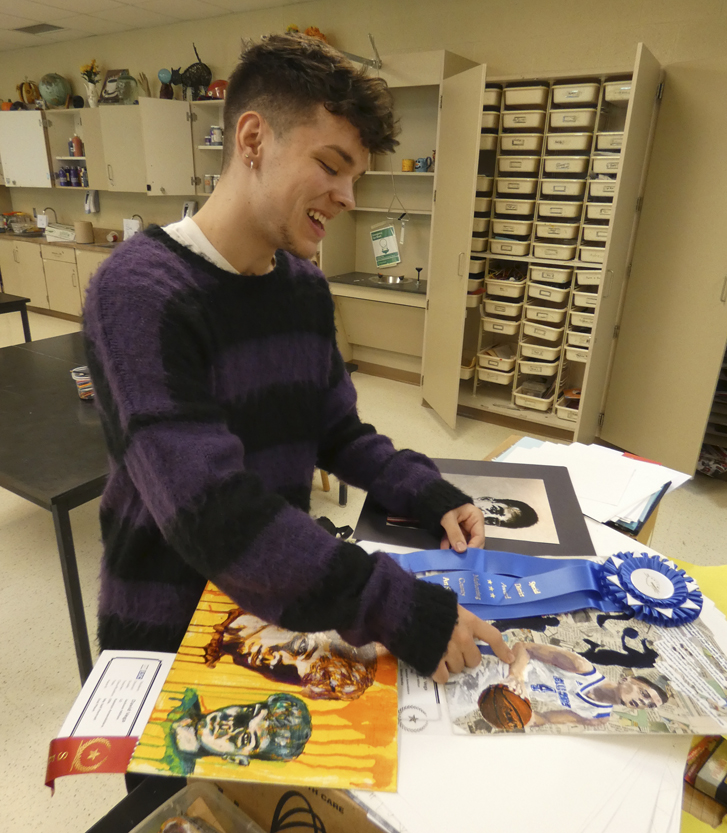 David Vega made it with charcoal and pastels.

The 18-year-old Jackson-Milton High School senior will report to the New York City landmark June 6 to receive a gold medal in the 2019 National Scholastic Art Competition.

His charcoal-and-pastels portrait titled “Duval” finished in the top 1 percent of nearly 340,000 works of art submitted from across the nation. His artwork will be displayed with other finalists for two years at museums and galleries across the country, and he also will be published in the 2019 Best Teen Art Scholastic art book.

“I am so proud of his hard work and artistic talents,” art teacher Katelyn “Miss A” Amendolara said. “I’m so excited … for students to see it is possible to go far from little Jackson-Milton.”

Vega, of Austintown, said he’s been expressing his creativity with artwork since he was a little kid.

“My mom told me I used to draw my own comic books,” he said. “When I watched cartoons, I’d draw the characters. She encouraged me. She said I was good at it.”

In elementary school, Vega decorated his classwork. Drawings danced around the edges of the pages. Sometimes, letters were reshaped into block people.

“I’d do the work. If I had time, I would draw,” he said. “Since I always got my work done and I got it right, I think the teachers enjoyed it.”

But other things that interest a young boy crowded out artwork, and he stopped drawing for a while. He picked it up again in middle school under the urging of Miss A, who wanted him to explore his potential.

“I don’t believe in cookie-cutter projects. It’s more the process over the product,” Amendolara said. “David, he took a great interest in charcoal and pastels. He’s able to work very fast and efficiently. He has the ability to pick up instruction easily and create his own style.”

She noted that Vega, a 5-foot-10 all-star shooting guard for the high school basketball team, also is passionate about music and fashion. “Luckily, he can channel that into his body of art,” she said.

Vega said he prefers to create portraits, especially of musical artists, fashion designers and his buddies from school.

“I like to get the expressions on their faces,” he said. “Now I’m starting to collage them a bit to get different expressions from different poses.”

Another of his award-winning pieces is a self-portrait in his basketball uniform. The background of the acrylic painting contains a flurry of smaller silhouettes of himself in various action poses on a collage of newspaper clippings covering the games.

“My favorite thing to do was charcoal and pastels,” Vega said. “This year, I got into painting and found out I’m pretty good at it, too. Once I master (acrylics), I’ll try oils because you can get a lot more details with oils.”

The piece that earned the gold medal is a head-and-shoulders portrait of one of his buddies, Romond Duval.

“He usually takes the pictures of what I’m drawing,” Vega said. “This time, I thought I’m going to flip the script.”

“His shirt was in color to bring out the colorful personality that he has,” Vega said.

Vega said he’d entered contests before, but Miss A pushed him to submit works to the big competitions. “I never thought I would win,” he said.

His father, Jackson-Milton High School principal David Vega, said of his son, “He always has been very creative, whether it was making videos or creating projects.”

There are artists, musicians and other creative souls on both sides of the family, the elder Vega said.

“It’s something he gets naturally,” he said. “We always encouraged it. If he wanted to buy supplies to create a project, we encouraged that. My opinion is it’s very important to encourage those things.”

That goes for family and for Jackson-Milton, he said.

“As a school, we try to encourage kids to find their niche. Not every kid learns the same way,” the elder Vega said.

Rather than art school, the younger Vega plans to attend fashion design school.

“I have always been into clothes. I’d like to create my own clothing brand,” he said.

He dreams of creating new trends inspired by older ones while producing his own line of affordable clothing.

But first, he has a little trip to take to next month to New York.

“I can’t wait to go and see Carnegie Hall for the first time,” Vega said.