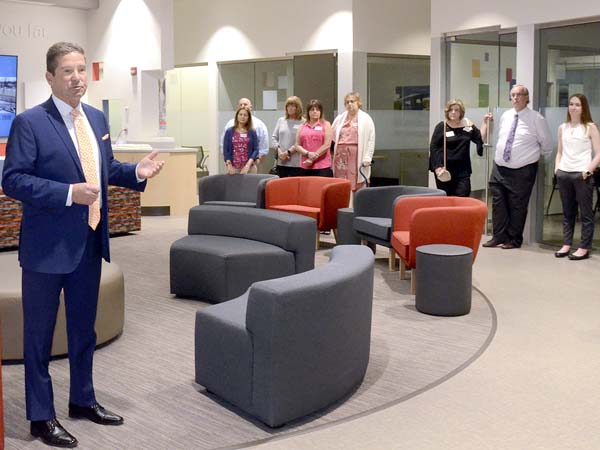 WARREN — 717 Credit Union is expanding its footprint at its flagship location in Warren and furthering its reach into Mahoning County with a new branch, which is its third there.

The ribbon was cut Thursday on the new 8,200-square-foot branch at 3185 Larchmont Ave. NE. It was needed because the office now is getting up in age and had gotten too small.

Ground was broken on the single-story building in mid-2018. It cost $3.6 million to build.

Most of the services will move to the new building. Staying put are the credit union’s retirement and investment group and loan originators.

The new branch at 4280 Boardman Canfield Road will be the 13th for 717, which has locations in Trumbull, Mahoning, Portage and Stark counties. It was expected to open in early April, but it was delayed and opened May 6. At 4,200 square feet, the building cost $2.5 million. The credit union already has branches in Austintown and in Boardman.

The credit union — the first financial institution in the area to offer ATM services, the first credit union in Ohio to offer checking accounts and among the first in the U.S. to offer credit cards — also is making some technical and service improvements at its drive-thrus.

New personal teller machines will offer two-way video conferencing with the teller behind the glass.

After normal business hours, the machines convert to ATM mode. And in the near future, they will be upgraded to ATM-plus to allow for more functions, including making a loan payment.

In addition, the machine will be capable of dispensing cash and coins in any denomination rather than $20 bills traditionally available at money machines.