Badger senior creates art on and inside shells 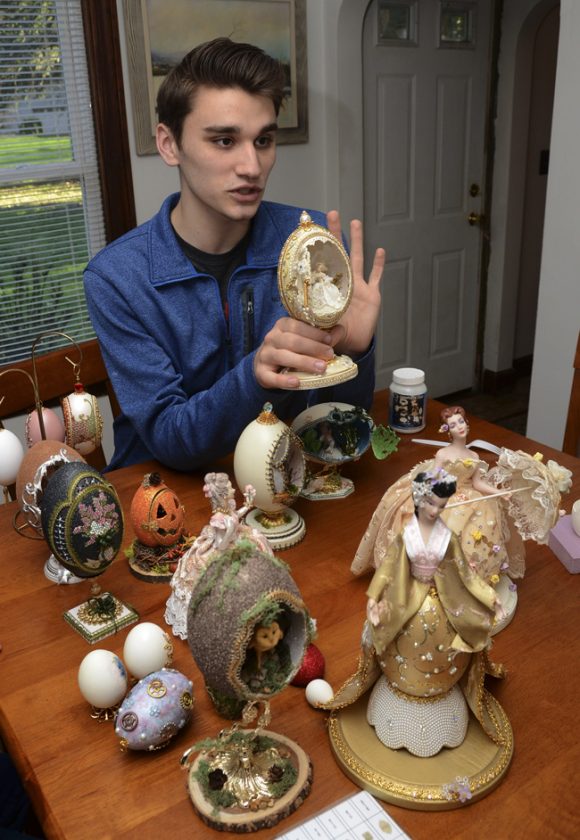 Tribune Chronicle / R. Michael Semple Badger High School senior John Grexa, 18, of Hartford, a master egg decorator, talks about his collection of decorated eggs. The teen also makes and sells the the paper-thin hinges that egg decorators use to create shell doors that open onto the scenes inside the decorated eggs.

“When he was little, he loved birds,” his mom, Kim Grexa, said. “He would go looking for nests and try to identify the birds by what the eggs were.”

Now the 18-year-old Eagle Scout works as an expert craftsman, teacher and businessman in a fragile artform — he decorates eggs.

Not the PAAS drop-a-dye-tablet-in-hot-water kits. Think the delicate intricacies and fine cuts of Faberge creations on empty egg shells ranging in size from finch to ostrich.

“It is a very old traditional thing,” Kim said. “It’s a dying art. A lot of people who are in it are elderly. They were so happy when he started. … They took him under their wings.”

Plus, John runs his own one-man international business manufacturing the paper-thin hinges that egg decorators use to create shell doors that open onto the scenes built inside the eggs.

He raises thousands of dollars for stage productions for Badger High School, where he is a senior, with decorated eggs and craft shows.

John also squeezes in a part-time, after-school job at Philadelphia Candies in Hermitage, Pa., which needed Easter help. So from making chocolate eggs, he goes home to work fancy wonders on real eggs.

Many of John’s creations fill a glass-doored display cabinet in a family home on Thompson Sharpsville Road in Hartford.

A glittery, seaweed-shaped door on an ocean-themed egg opens to reveal a miniature mermaid seated on a seashell, surrounded by tiny shells, pearl bubbles and sea grasses.

On another egg, the starred cutout in the off-white shell provides the window onto a pastoral interior scene of a maple sugar shack, which lights up on a field of green with trees gracing the interior shell walls.

There are scenes of Christmas, birds, flowers and people tucked inside of eggs decked in paints, glitter, bows, moss, pearls, fabrics and photos. John colored an uncut egg with alcohol ink to produce a marbling effect, then glued on it the tiny gears from the inner workings of a watch for a timepiece theme. He also can use a solution that lifts photos like Silly Putty with newsprint and transfers the pictures onto egg shells.

They’re eggs, but Easter is not his busiest time of year.

“The main selling season is Christmas,” John said. “But I’ve sold a lot this Easter.”

None of it was the exact egg business young John meant to get into.

“I had a teacher who brought Ukrainian eggs to school six years ago,” John said.

Ukrainian Easter eggs, or pysanka, are eggs inscribed with colorful and complicated designs “written” with beeswax, which fascinated him. His grandmother took him to a Palm Sunday festival where he bought Ukrainian eggs.

“The same day, she took me to Alcraft Egg Artistry (in Brookfield) where the store owner said they were going to have a class (in Faberge-style egg decorating). I said, ‘Well, I really don’t think so.’ I wanted to do Ukrainian eggs. I didn’t want anything to do with the eggs I do now. I pushed my grandma through the store.”

But after a disastrous attempt at pysanka, John took another look at the Faberge style. The problem was, the class cost $100, not something a 12-year-old kid has handy.

“He bugged me for a year about it,” Kim said. “I said, ‘Do you want a birthday party or do you want to take an egg class?'”

John bypassed a birthday party in favor of the class that had him cut a goose egg, including a piece of the shell that would be hinged to become a door to the interior of the egg, paint and decorate it, and affix a light inside.

He shares his passion by teaching egg decorating classes. Last week, he led a group through a two-hour session of turning goose eggs into Easter baskets. The top half of the egg is cut away to leave what looks like a basket handle. The whole thing is glazed and glittered. The inside of the basket is filled with grass, miniature rabbits and whatever else one’s imagination chooses to create the scene.

John said, on average, it takes him three to five hours to fashion his elaborate egg designs. They sell for around $10 for a design on a quail or duck egg to $90 for a larger work featuring an emu or ostrich egg.

He bought Hartford Hinges three years ago from Alcraft with his parents’ help. He continues to pay them back.

“In my shop, I have 10 different machines. Every hinge takes seven machines,” he said. “We punch out two blanks, put them together, run them through another machine to curl them, and then a pin pusher inserts the pin.

It would appear that John has to be raking in the dough with his egg business. Not so.

“Any money I make, I put right back into it,” he said. “My basement is full of equipment. So technically, I don’t make anything off of it. But it supports my hobby.”

First, there’s the cost of the eggs. He has them shipped in from California already empty. A single emu egg shell costs $20.

Then there are the miniatures, which might be small, but they’re not cheap. For example, two dancers in one egg were handcrafted on a Q-tips base and cost him $75.

Add to that the Swarovski crystals, beads, embossing, paints, glazes, glitter and whatever other materials are used to deck out the egg, and it adds up to a hobby, not a career.

Yet he does raise thousands of dollars for others by organizing egg and craft shows. He started a spring craft show at Badger High School that draws 150 to 200 vendors. In its third year, it raises $8,000 to $12,000 per year for the Fine and Performing Arts Boosters, of which he is a member.

He also puts on a spaghetti dinner every fall with a small craft show and a trunk sale in the school parking lot in the summer.

John is a stage manager for school musical productions, designing and building sets for the stage. The boosters used to raise about $1,000 per year for school stage productions. That was serviceable, but limiting.

“There were certain things we wanted and couldn’t do. Now they can get everything they want,” John said.

He also helps organize decorated egg shows across the region, from Cleveland to Easton, Pa.

John was just accepted into into the business management program this fall at Youngstown State University.

He said he would like to go into human resources, but no matter his career, John plans to keep creating elaborately decorated eggs.