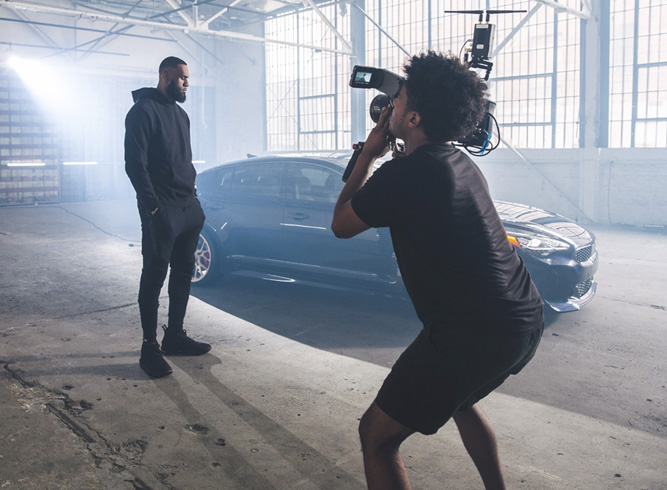 Special to the Tribune Chronicle Warren / Howland native Nathan Ray Salter, right, is shown on the set of a car commercial with NBA star LeBron James.

WARREN — Nathan Ray Salter signed up for a multimedia class when he was a student at Howland High School because it sounded easy.

He ended up finding his career.

Salter, a 2008 Howland High School graduate who grew up in Warren and Howland, now works as a cinematographer and camera operator, where he’s worked on projects with LeBron James, Paul McCartney, Meryl Streep, Stevie Wonder and Noah Wyle.

Salter, 29, said he always was interested in movies, but the multimedia class taught by Brian O’Dell, his JV basketball coach, intensified his interest.

“Originally, I took it because I thought it would be an easy A,” Salter said. “He was my old coach. But it was very challenging. I squeaked by with a C- (initially). That actually motivated me. A lot of things came easy to me, and this was tough and linked to something I wanted to get into.”

By his senior year, he won a local competition for a public service announcement he created, and he decided not to pursue sports in college, but go to film school instead.

“(O’Dell) pressured me to really learn the trades of the craft,” Salter said. “Things I learned in that high school class have carried me along until today.”

“Being from such a small town, they always allowed me to dream as big as I wanted and supported me,” he said. “As long as I was confident in what I wanted to achieve, they would help me the best they could to formulate a plan to achieve those goals.”

While studying at Columbia College of Chicago, a private arts school, Salter landed an internship with a production company that made music videos, giving him a chance to work with such performers as Chance the Rapper, Vic Mensa and Raekwon from Wu Tang Clan. The connections he made on those projects put him in touch with other aspiring filmmakers in Chicago.

After graduation, Salter said he was apprehensive about working exclusively as a freelance cinematographer / camera operator, so he took a job at a gym. However, when a friend offered him a chance to be cinematographer on a music video that was shooting in Los Angeles, he had to pick between the steady job or the career he wanted.

“After that experience, I was comfortable to just say I was a freelancer,” Salter said. “I put my feelers out, and that’s how I started my freelance career.”

One of those Chicago contacts led to work with someone else from the 330 — NBA star LeBron James and his media company Uninterrupted. Salter has worked as a camera operator on “The Shot,” the talk show James does for HBO, as well as an automobile commercial and other smaller projects for James’ company.

“I’m blessed to be a part of it,” Salter said. “I was a wholehearted fan before this experience, but being in the room with the man on numerous occasions and listening to his train of thought, he deserves all that he has 10 times over. He’s one of the most special people I’ve been involved with.”

Another project that put Salter in contact with some of the biggest names in entertainment is “The Dream Still Lives,” a video spearheaded by Stevie Wonder to commemorate the 50th anniversary of Martin Luther King Jr.’s death. Salter shot interviews with McCartney, Streep, Dave Matthews, Common and Billy Crystal, where they shared their dreams.

Salter worked as a camera operator on “Slice,” starring Chance the Rapper (it was released theatrically by A24 and is available on Amazon Prime). He also worked as cinematographer on “Four Corners,” a short film about gun violence that has played several film festivals.

Salter’s biggest break yet was working as a camera operator on “The Red Line,” a new series starring Wyle that will premiere later this month on CBS.

“The cinematographer, Kira Kelly, I met her on a job before,” Salter said. “She did one of the biggest things I’ve ever experienced so far … I wasn’t in the union before this. With her co-sign and trust in me, I was able to work on this show and get into the camera union. I’ve been incredibly blessed to have the friends and coworkers I’ve had, but this was huge.”

Getting his union card inspired Salter to make the move earlier this year from Chicago to Los Angeles.

“I had just turned 29 and wanted to get out here to be with the best of the best and see how high I can climb,” he said. “I just want to try to be the best filmmaker I can be, and L.A. is the film mecca of the world.”