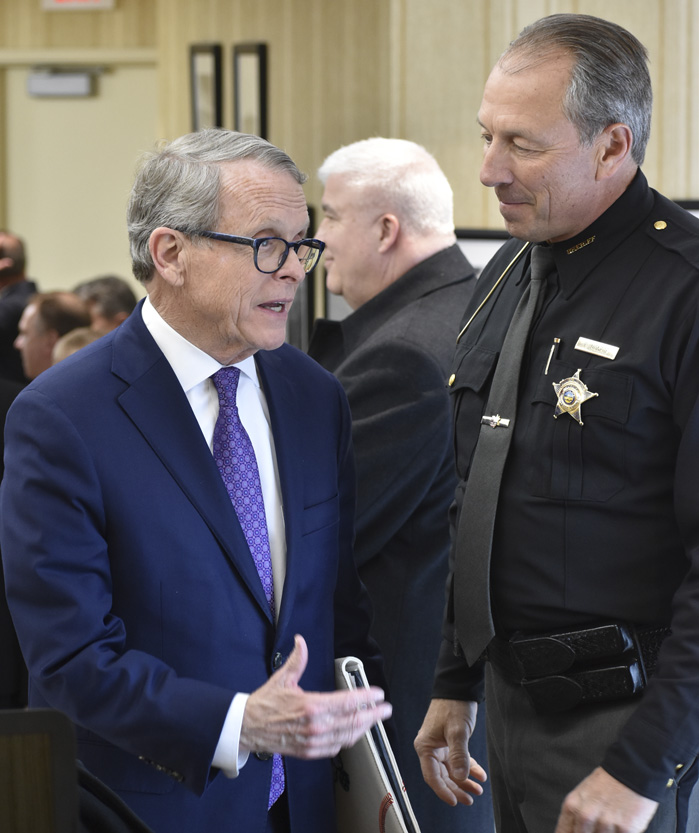 WARREN — While meeting with dozens of elected and appointed Mahoning Valley officials Friday, Ohio Gov. Mike DeWine said if a gas tax increase isn’t approved, the Ohio Department of Transportation would have no cash to fund new projects.

“Without this, there will be no new projects at all,” DeWine said.

ODOT has a $1 billion shortfall and the tax hasn’t increased since 2005, DeWine said.

The issue is just surfacing because the state was borrowing money to make up for it, DeWine said.

Although the number of miles being driven in Ohio is on the rise, revenue is flat because vehicles get better gas mileage, DeWine said.

Increasing the tax from 28 cents to 46 cents will cost an average driver between $130 to $183 per year, according to an analysis by the Cincinnati Enquirer.

But the $1.2 billion the increase is predicted to bring in won’t just go to ODOT — 40 percent will be distributed to local governments.

And without it, even regular maintenance would suffer, DeWine said.

Ohio Sen. Sean O’Brien, D-Bazetta, said the tax is regressive — a flat tax that hits lower-income people harder because it consumes a larger percentage of their income than people who have more cash.

DeWine and Lt. Gov. Jon Husted met with local elected officials, including numerous mayors, the county commissioners in Mahoning and Trumbull counties, the heads of the Youngstown Warren Regional Chamber, the Western Reserve Port Authority, Eastgate Regional Council of Governments and elected state representatives and senators, in order to hear for which issues they want the state’s help.

Jim Kinnick, director of Eastgate, said the state could help with developing the Mahoning River corridor into something that increase the quality of life in the area. Work is underway to remove the dams along the river, which passes through 26 communities in the Valley, Kinnick said.

The state could help by designating the area a state park.

DeWine said he can’t make any promises about creating a state park, but one of his first calls after the meeting would be to the director of the Ohio Department of Natural Resources to discuss the project.

Kinnick said the dams could be completely removed in two years and a state park would drive economic development around the river, while creating vibrant communities where younger people want to live.

James Dignan, director of the regional chamber, said the corridor represents what the area is trying to become.

DeWine said he is still building a relationship with General Motors, but there is no news on any positive developments. GM is ending production of the Chevrolet Cruze and idling the Lordstown plant March 8.

If GM doesn’t choose to make a product, DeWine said he will do what he can to attract a different business to the large plant.

Girard Mayor James Melfi told DeWine and Husted the area needs more jobs for “common” people so they can earn enough for a good life and contribute to society.

The administration is looking at the state’s job programs and working on improving it, Husted said.

DeWine said he also is interested in finding a way for the state to assist more with eliminating commercial blight.