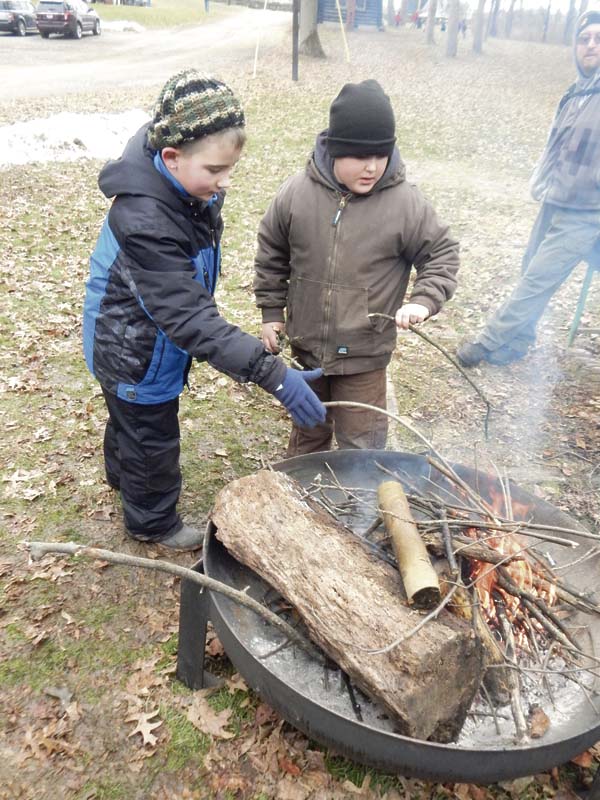 Drake Russell, 9, left, and Donovan Kromer, 8, both of Mineral Ridge and Cub Scout Den 4083, help create a fire at the Salute to the Armed Forces Day held at Camp Stambaugh in Canfield. Photo by Bob Coupland

CANFIELD — More than 150 Cub Scouts from throughout Trumbull County converged on Camp Stambaugh for a day to mark “Salute to our Armed Forces” Day, which included various events and activities for scouts to practice their skills.

Among those taking part were nine Scouts from Den 4083 in Mineral Ridge.

Mike Evans, Den 4083 leader, said the scouts spent the entire day at the camp where they learned skills that any Scout would use, such as dealing with an obstacle course and mock rescue scenarios.

Ryan Evans, 6, of Mineral Ridge, said he liked the slingshot activity and the survival skills.

“We had to use different equipment such as ropes to help rescue someone,” he said.

Josh Reble, 10, of Howland, said he learned ways to work as a team to help rescue someone in different situations.

Bill Moss, curator of the Boy Scout Museum at the camp, said the Scouts also learned the history of scouting and of Camp Stambaugh. He said the weekend really emphasized the importance of learning teamwork and practicing Scouting skills and having fun in the winter.

Scouts who performed their tasks the best throughout the day received awards.

To read letter click here WARREN — Oral arguments are scheduled for next week in Cincinnati in the federal ...