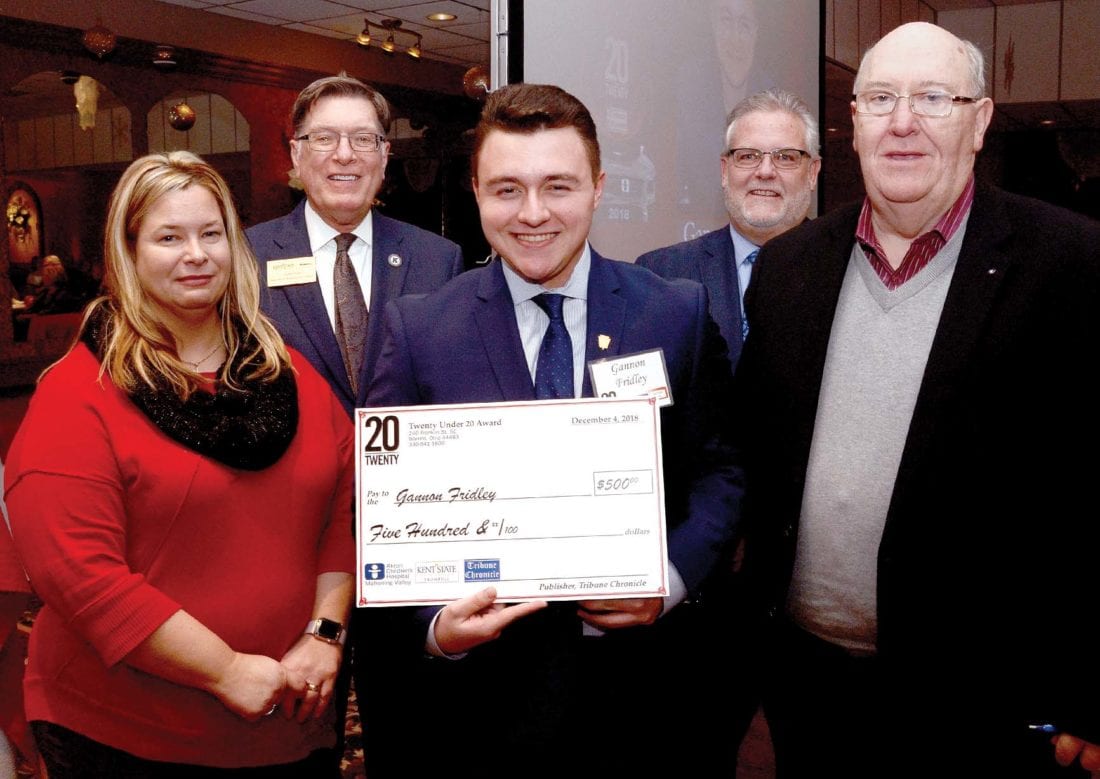 WARREN — John F. Kennedy High School senior Gannon Fridley said he was “totally surprised” when he was named this year’s top Twenty Under 20 on Tuesday and plans to donate the $500 award he received to Earth Angel Farms, where he volunteers.

The Tribune Chronicle, Akron Children’s Hospital Mahoning Valley and Kent State University at Trumbull, recognized 20 outstanding young people for their leadership and volunteerism in the community at the sixth annual Twenty Under 20 awards banquet at DiVieste Banquet Hall.

Fridley, who is involved in many groups both at JFK and in the community, has for several years helped Earth Angel Farms, a non-profit organization created by Dr. Holly Maggiano, that teaches individuals with physical and developmental disabilities agricultural learning and healthy living.

“Working there has shown me the true definition of hard work. These individuals give 110 percent effort on a daily basis,” Fridley said.

He was nominated for the award by Maggiano, who noted Fridley helps with many fundraising efforts and programs through Earth Angel Farms.

“Words can’t describe how much of an honor this truly is. I was not expecting this. I encourage others to give of themselves and help others. I will use the money to help out Earth Angel Farms,” Fridley said.

Brenda Linert, editor of the Tribune Chronicle, said each of the 20 recipients is “an asset to the community by providing leadership and living productive, ethical, honorable and inspirational lives. They have shown their leadership in providing service to help others.”

In addition, Lance Grahn, dean at Kent State at Trumbull, said all 20 are offered a full two-year tuition scholarship to the local Kent State University campus, if they decide to attend here in Trumbull County.

“Every college and university in the country wants to have you. We hope you come back here after completing your education and help re-energize this area,” he said.

Charles Jarvis, publisher of the Tribune Chronicle, said everyone will leave the event with a “greater appreciation of what the next generation is capable of.

“They have given of themselves in an extraordinary way to help make better our community and the lives of others. They have shown their giving and heart for others,” Jarvis said.

“This award is just as much for all of you for your influence and support in their lives,” he said. “We have leaders in this room. Leadership is key in any organization, government and community. These outstanding young people have shown their leadership through service to their community. They are all winners.”

He said there were 50 nominations this year.