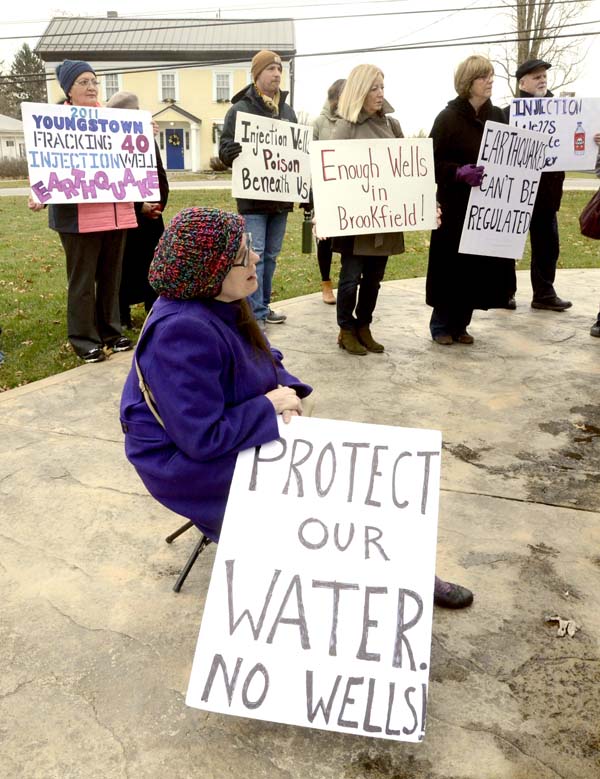 Jane Spies of Hubbard, foreground seated, member of Frack Free America, and others gather together in Brookfield Center Thursday afternoon for a memorial vigil for the earthquake of 2011. Photo by R. Michael Semple

BROOKFIELD — With signs stating “Protect Our Water. No Wells” and “Earthquakes can’t be regulated” about 20 people gathered at the Brookfield center green on Thursday for a prayer vigil to remember the Dec. 31, 2011 earthquake that was the result of fracking at an injection well in Youngstown.

The group was joined by officials from Brookfield and Hubbard townships.

The 4.0-magnitude earthquake, which originated on Youngstown’s west side, was felt in parts of Trumbull and Mahoning counties. Following the earthquake, the Ohio Department of Natural Resources banned injection wells within five miles of the Northstar 1 injection well.

The report suggested the earthquake, and a series of smaller ones that hit the area starting at the end of 2010, were the result of brine water lubricating that fault line and causing it to slip.

In 2014, researchers at the Lamont-Doherty Earth Observatory at Columbia University published a study suggesting that as many as 109 tremors between January 2011 and February 2012 were directly linked to the Northstar 1 injection well. Researchers found the first earthquake was recorded in the city 13 days after the well came online in December 2010. They determined the well was responsible for the tremors that continued into 2012.

The 4.0-magnitude earthquake was felt as far north as Cortland and as far south as Canfield. It was also reported to be felt to the northern border of Trumbull County, in the Shenango Valley in Pennsylvania, and even as far as Buffalo, N.Y.

Jane Spies with Frack Free America in Youngstown, said it was seven years ago when the area felt the earthquake.

“We are commemorating that day because we do not want people to forget the earthquake and how the situation has really not changed since then because this area is getting more and more injection wells,” Spies said.

Spies said residents are concerned with the number of wells in the area.

Hubbard Township Trustee Chairman Fred Hanley said trustees on Thursday passed a resolution regarding the Freedom of Information Act asking ODNR to provide the locations of injection wells in the county.

“We have heard there can be as many as more than 200 in the area. That request is to get them to tell us where they all are. Are they in cities or townships?” Hanley said.

He said it seems like the wells are more likely to be in townships.

Resident Gloria Douglas, who lives in the Wyngate Mobile Home Park off state Route 7, said she is concerned with the increased truck traffic to a nearby well site.

‘You see the trucks go in and out all day long and even into the night. It’s 24-7 at times. I have seen some really huge trucks going in,” she said.

During the vigil, numerous trucks were seen heading to and from the well site.

The Rev. Monica Beasley-Martin of Defenders of the Earth Outreach Mission, who led the prayer vigil, said there is concern of the waste and brine being brought to such wells. She said state officials need to be made aware of residents’ concerns of what is being done by the oil and gas well industry.

“How can we forget the New Year’s Eve 4.0 earthquake that the Youngstown area experienced? That New Year’s Eve quake was ultimately linked to an injection well. It is important that we do not forget this,” she said.

Those at the vigil said they also want to send a message to the ODNR to halt the injection wells planned in Brookfield and Hubbard townships.

Cases filed in Trumbull County May 9-16: NOTICE OF APPEAL STATE OF OHIO 11TH DISTRCIT COURT OF APPEALS vs. ...

Back in 1985, people had televisions, radios and scanners to let them know of severe weather and tornadoes. Today ...

Mahoning County reported one new COVID-19 death on Saturday, bringing its total to 174. Columbiana County has 52 ...