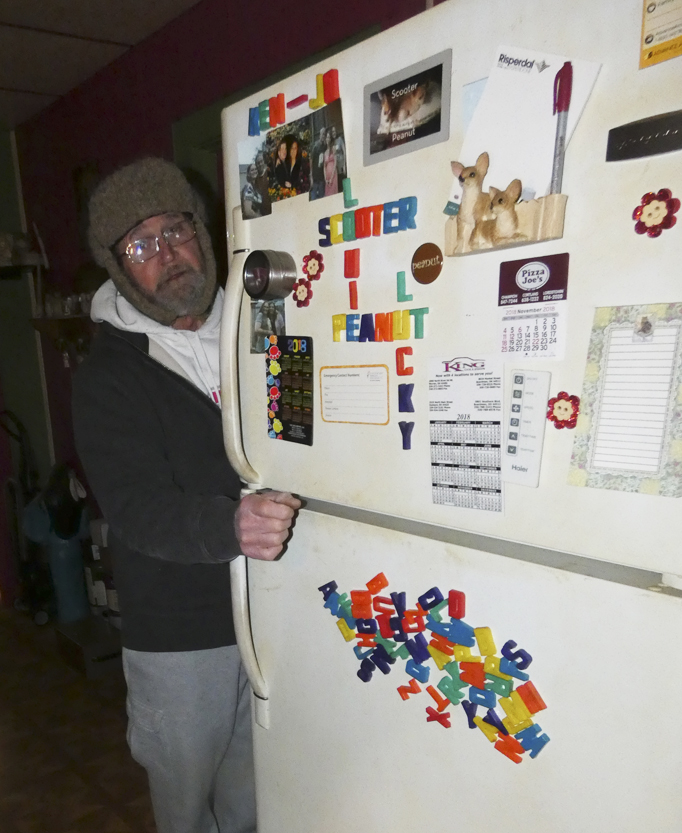 Tribune Chronicle / Raymond L. Smith Kenneth York, 66, said he was standing beside his refrigerator with his .38 caliber pistol as a burglar was breaking in through his back door to get into York’s house at 526 Hall St. NW. York eventually shot the man, later identified as Billy R. Morrow Sr., 48.

WARREN — Kenneth and Heather York were awakened shortly after 1 a.m. Tuesday by the sound of their dogs growling at their back door.

It was then that the couple, still half sleep, heard someone attempting to break into the rear storm door of the single-family, two-story house at 526 Hall St. NW.

“He was making a racket,” Kenneth York said.

Kenneth York, 66, grabbed a .38 caliber pistol and ran toward the refrigerator, which sits in the living room, just outside of the kitchen door.

The man broke through one of the glass panes in the wooden door, unlocked it and pushed open the door.

Kenneth York, leaning against his refrigerator to steady his aim, again and again yelled at the intruder that he had a gun and would shoot.

Morrow, who KennethYork described as an imposing man, entered the kitchen and was moving quickly toward him. York eventually fired his weapon, and Morrow stepped backward into the kitchen.

“He started walking forward,” Kenneth York said. “I told him to lift his arms and get on the floor.”

Morrow stepped forward, asking York how big was his gun.

“‘Big enough to kill you,’ I said. He moved toward me me again. I told him I would shoot again.”

Morrow eventually went down to the floor as ordered, holding the arm that was shot.

“He was more than 300 pounds,” York said. “I wasn’t going to allow him to come any further into the house.”

“They were very quick and very professional,” Kenneth York said about the police officers who arrived on the scene. “I was glad to see them.”

York said he has the pistol in the house for the family’s protection.

Heather York, who was shook up during the attempted break-in, credits their dogs with possibly saving their lives.

“If it had not been for the dogs, we would have been asleep when he came in,” she said. “You don’t know what would have happened. We owe them our lives.”

York said the northwest-side home formerly was owned by his grandfather, so it had been in the family for many years.

“No one has attempted to break in for many years,” he said. “I’m hoping we will not have another.”

Looking around the house, York said Morrow walked through his neighbor’s backyard and pulled back the property’s six-foot wooden fence next to the garage to get into the yard

He initially attempted to break the back door’s window using a large rock he found, then used a shovel to pull back the storm door, before breaking the glass pane.

Morrow has an extensive criminal record, according to the Trumbull County Sheriff’s Office website.