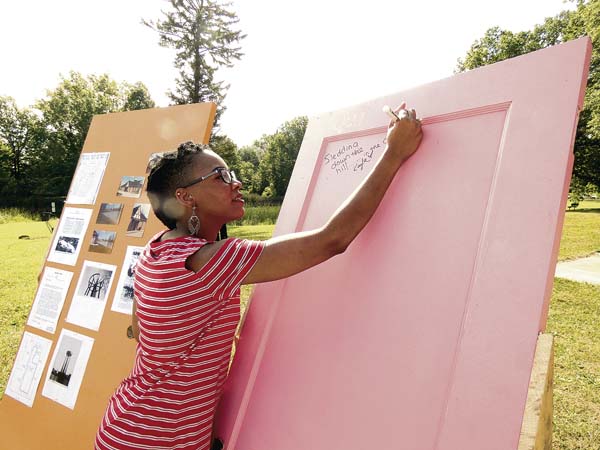 Tribune Chronicle/Andy Gray Warren native Kayla Sparks, 28, who now lives in Nashville, shares a memory of Quinby Park on one of the doors attendees were invited to decorate at a Trumbull Neighborhood Partnership/Arts Across America event Monday at Quinby Park.

WARREN — Hundreds gathered in Quinby Park Monday morning as the first event in a full day of activities planned around Yo-Yo Ma’s visit to the Mahoning Valley.

The cellist was not in attendance, but representatives from the Kennedy Center for the Performing Arts in Washington, D.C., and Americans for the Arts were there. Warren was the fourth stop on the Kennedy Center’s 50-stop Arts Across America campaign, which celebrates communities committed to using the arts to promote connection, a strong creative economy and increased cultural citizenship.

“We’re going across America to find the hidden gems in America, the small towns that are doing big work, the towns that don’t always get the recognition they deserve and the places we in D.C. can really learn from,” said Kathy Fletcher, national director of Turnaround Arts at the Kennedy Center. “Thank you for sharing your learning about the arts and community and culture and how these things can be used to lift up and inspire and regenerate communities.”

Trumbull Neighborhood Partnership unveiled two pieces of public art, a decorative bird bath and a trellis, by Youngstown artist Tony Armeni, which were paid for with a grant from the Ohio Arts Council. Additional improvements are planned in the park on the city’s southwest side.

TNP announced a $40,000 grant from the William Swanston Charitable Foundation that is earmarked to improve active play in young children. Attendees were encouraged to share their ideas about what kinds of playground equipment and other amenities they would like to see at the park.

Live music filled the park while children played on the existing equipment there. Attendees were encouraged to paint on and share their memories on three salvaged doors, and TNP Deputy Director Lisa Ramsey said the doors would be donated to the neighborhood group Community Concerned Citizens II for possible permanent display in the park’s shelter house.

Warren native Kayla Sparks, 28, who now lives in Nashville, was home visiting family and wrote on the door about sledding at the park as a child.

Several community organizations were in attendance, with information on public health and as well as the arts. Those booths caught the eye of Nora Halpern, vice president of leadership alliances for Americans for the Arts.

“The work we do with Americans for the Arts is at that nexus between art and action,” Halpern said. “Art is the campfire where we’re all gathering, but it’s really about broader society.”