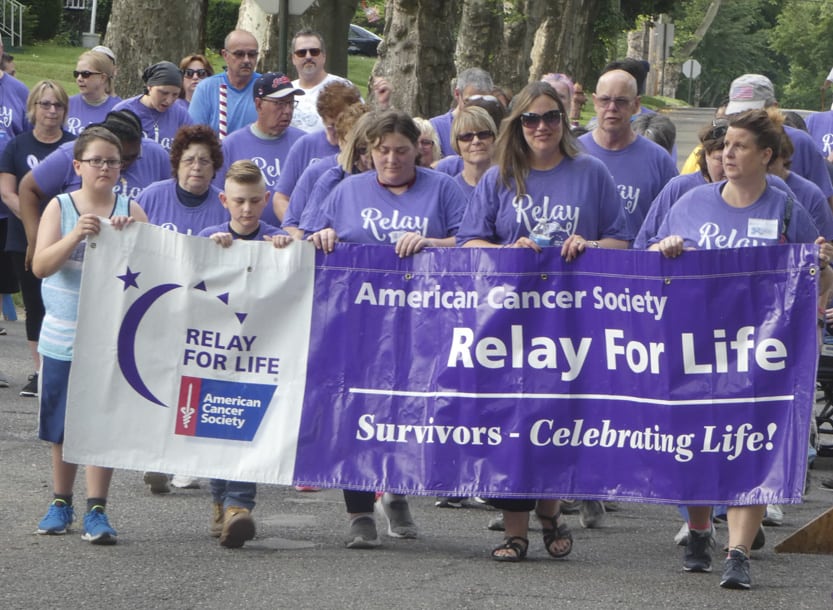 More than 65 cancer survivors and their supporters walked the first mile of the Liberty, Girard and McDonald Relay for Life held in Mcdonald Friday and today. About 300 people were there during the first hour of the event. This is the second year that Mcdonald hosted the relay at its downtown park.

McDONALD — Charles Cupan considers himself one of the lucky ones.

A survivor of stomach cancer, Cupan doesn’t believe he would be alive today if not for his doctor, during an examination three years ago to change the dosage of another medicine, discovering the 62-year-old was in the early stages of the cancer.

“It was a sad day when I was told I had cancer,” Cupan said. “However, I’ve since learned there are no symptoms.”

Life, he said, was little more than a blur for the next 15 months as he went through radiation and chemotherapy treatments.

“What helped was the fact my relatives, friends and co-workers came to see me, even when I didn’t feel like seeing them,” Cupan said.

Cupan of McDonald was among at least several hundred people Friday at the Liberty-McDonald Relay For Life at Woodland Park in McDonald. This is the second year the event, which runs through 2 p.m. today, has been at the park. About eight teams participated in the opening ceremony.

Some of the events today include touch-a-truck for children, zumba and a balloonhead race.

“We are hoping to raise $40,000 this weekend,” said Kaitlin Irgang, a representative with the American Cancer Society.

Kathy Leek, 53, of Walmart’s Team Kathy, was diagnosed with metastatic breast cancer in November 2017. It has spread to other parts of her body.

“I was a co-manager at the Liberty Walmart and my co-workers were there for me from the beginning,” Leek said. “It has been their support that lifted me up.”

Walmart’s Team Kathy members carried poster size photographs of Leek that show her as a teen, a young mom rocking on a guitar and more recent photographs.

Walmart has been participating in Relay For Life every year for more than a dozen years, said team leader Kristin Cupan.

Every year, a different employee or their relative is highlighted by the Walmart team during the relay.

“Our goal is to find ways to help,” she said.

Angela Frederick, a mother of a member of McDonald’s Team Cancer Busters, said the group is comprised of McDonald students who heard about Relay For Life and wanted to do something to help.

The preteens and teens organized a lemonade stand to raise money for the American Cancer Society.

The Relay For Life in McDonald was the last of the season in Trumbull County. Others were at the Wellness Center in Niles that raised nearly $33,400 and in downtown Warren around Courthouse Square that raised $196,000 for the American Cancer Society.