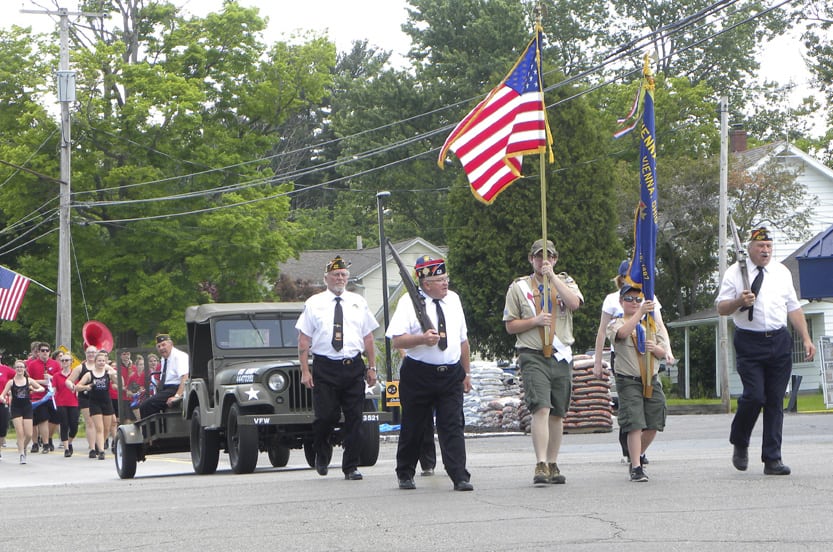 VIENNA — About 200 residents gathered Monday in the Township Green for a Memorial Day service to honor servicemen and women who gave all.

Service personnel and their families from Veterans of Foreign Wars Post 3521 in Vienna, Boy Scouts and Girl Scouts and the Matthews High School Marching Band marched in a parade and participated in the ceremony in remembrance of Vienna veterans from the Civil War to Vietnam. The ceremony was followed by a luncheon at the AMVETS post across the street from the green.

Jeff Dreves, 74, an Army veteran and former commander of VFW Post 3521, said he told the parade organizers they could count on the VFW to do whatever was needed.

“We were short guys — that’s why we have Scouts helping us out — but they were happy to do it. So, it worked out fine,” Dreves said.

One of those Scouts, Nash Timko, 20, of Hartford, carried the colors to lead the parade.

“My grandfathers were members of the Vienna VFW, and when I got older, I started carrying the flag for them,” Timko said.

Although one of his grandfathers can no longer walk the route and the other has since passed away, Nash has remained a part of the Memorial Day service, joining other members of his family.

Gavin Clower, 11, of Johnston, who shared the front flag-carrying position, shares a family connection with Nash. His grandfather and Nash’s grandfather were brothers.

Daryl Timko drove an Army jeep in the parade. He said it is his way to serve because he missed traditional service due to his age in times of war.

In addition to a call to service and remembrance those who sacrificed their lives, an overall theme of the day was to pray for servicemen and women on duty now to keep the country safe.

“During our country’s gravest hours, they gave their lives in defense of our country. Let us honor them and those now serving our country, today and every day,” John Hinely III, the Memorial Day association officer, said in the welcome address on the green.

“They stand in the gap for our protection,” said Pastor Scott Flanders during the invocation. “Let our military brothers and sisters feel our love and support not just today, but every day of the year.”

Among those in attendance, John Jones, 69, an Army veteran, said he had come back from a yearly reunion in Georgetown, Ky., with his fellow Vietnam servicemen and has been at the event each year since it started.

“It means a lot to me, especially when I come back from seeing those guys I served with,” he said.

Jack Keir, 80, a Navy veteran of Vienna, waited on the green watching his fellow servicemen walking in the parade. Although he could not walk with them, he said his feeling for servicemen has not wavered.

“All the cemeteries have been decorated and readied for this,” he said.

The Memorial Day celebration in Vienna was supported by several volunteer organizations in addition to AMVETS Post 290 and the VFW Post 3521 — the Western Reserve Chapter of the Daughters of the American Colonists, the Vienna Historical Society, Mathews athletics and band, the Vienna Township trustees, the fire and police departments and New Life Community Church.

Standing in the shadow of a monument to the fallen from Vienna, Hinely gave thanks to volunteers who helped with the service and pleaded for more help to organize the day in the future.