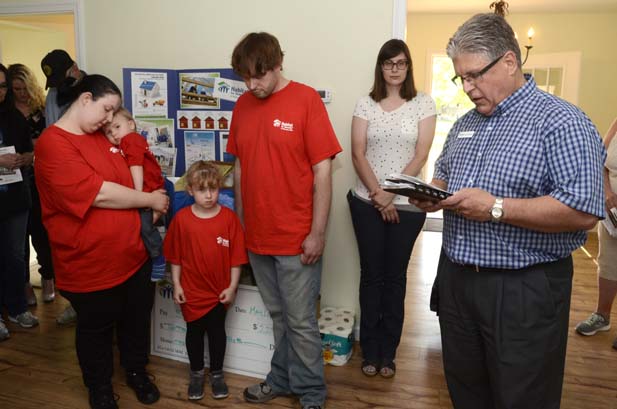 WARREN — After more than 2,226 man hours put in by 415 volunteers, Habitat for Humanity of Mahoning Valley celebrated the restoration of a Willard Avenue house with a dedication ceremony on Thursday.

The new homeowners, Tanya and Timothy Jornigan, have lived in an Austintown apartment with their two children Zoey, 6, and Zander, 21 months, but they had hoped to own their own home for the past 12 years.

“We live in an apartment, and it is not the greatest,” Timothy said.

“They don’t have anywhere for the children to play so our goal was for the kids to be able to run outside more,” Tanya said.

However, without the money for a down payment and with pre-existing debts, they had little hope of getting a mortgage loan.

It is a story familiar to many Americans. After the 2008 financial crisis, many Americans lost their homes to foreclosure, with the rate of homeownership dropping from a high of 69 percent in the mid-2000s to a 40-year low of 63 percent in 2016, according to the U.S. Census Bureau.

While the rate of ownership has started to crawl back up, housing prices have passed inflation since 2012, ballooning 6.3 percent last year. With wage growth slow and Americans’ family and personal debt growing, one Harvard University study estimated 39 million Americans can’t afford their own home.

Tanya and Timothy Jornigan, though, were able to achieve the dream of homeownership with the help of Habitat for Humanity.

“(Habitat) was about helping us build a life, instead of filling their pockets (like the banks),” Timothy said.

“They weren’t judgmental,” Tanya added. “We are just very grateful.”

Their friend, Leah Sakacs, who works with Habitat through the AmeriCorps program, had first suggested they submit an application.

“These are very good friends, who I consider family. For 16, 17 years, Tanya has put up with me, and I know they deserve a home,” Sakacs said. “They have been living in this two-bedroom apartment for awhile, and they’ve never had their own home. Tanya had just gotten this job she really loved, and she started being able to pay off some of her debt, and I was just like ‘huh Habitat.’ It just kinda popped up in my head.”

The Jornigans specifically requested the once-derelict house on Willard Avenue, and they put 250 hours into building it alongside other volunteers.

The project was supported by the Warren-Trumbull HOME Consortium, the U.S. Department of Housing & Urban Development, the Trumbull Neighborhood Partnership, the city of Warren, Coventry Lighting, AmeriCorps and Westminister College Campus Chapter, among others.

“There are a lot of people in this room who made this day possible,” Warren Mayor William D. Franklin said during the ceremony. “We have a long history in this city with having Habitat for Humanity, whether it is rehabbing a home like this or new construction. I’m here to celebrate not only this day but also our partnerships.”

Habitat for Humanity of Mahoning Valley, which covers Mahoning, Columbiana and Trumbull counties, hopes to complete 12 projects across the three counties every year. This is Habitat’s 140th home in the Valley.