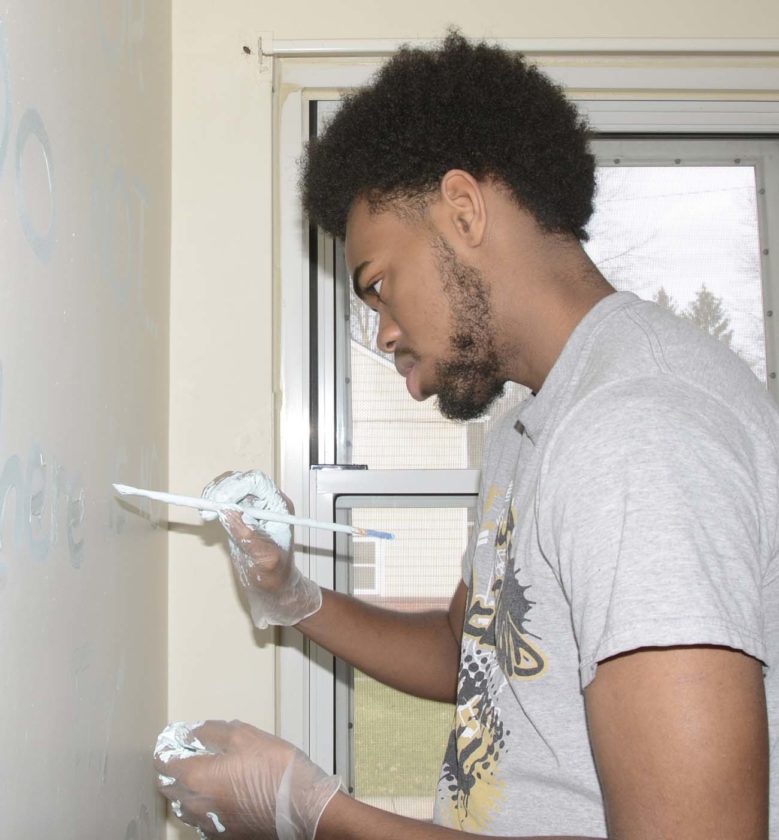 040218...R ORGANIZERS 3...Warren...04-02-18...Makai Sims, 18, a member of Junior Organizers, paints inspirational words on a wall in the TMHA house that is being transformed into a recreational/community center...by R. Michael Semple

WARREN — Having a safe place for young people to study, play games and generally hang out seemed to be an obvious need to members of Trumbull Neighborhood Partnership’s Junior Organizer program.

Yet it was something that has not been available for most of their lives.

So they are creating it for themselves.

“What we’ve always understood is when people have nothing to do, trouble can find them, even when you’re not looking,” Makai Sims, 18, the Warren G. Harding High School senior who wrote the grant application for funding, said.

Members of the teen group are spending their spring break this week renovating 1979 Hazelwood Ave. SE, a two-story, four-room Trumbull Metropolitan Housing Authority house that will become the center.

Junior Organizers, all students at Warren G. Harding High School, have been working with the school district, TNP and the Wean Foundation to get the project off the ground.

It was through the annual Raymond John Wean Foundation’s Neighborhood Success Grant program application that the teens came together in 2017 to discuss what kind of project they wanted to do.

Working with Warren G. Harding counselor Jodi Austin Brown, TNP’s Miles Jay, and Corrie Adams, a program officer with the Wean Foundation, Junior Organizers crafted an application that convinced the Neighborhood Success Grant board to bring them in for a presentation.

“They met all of the grant requirements,” Adams said. “Creating a center is really an interesting solution to a long-term neighborhood challenge of young people not being able to find something to do.

“They looked at the available resources and figured out a solution,” she said.

John Owens, a family impact coordinator with United Methodist Community Church, emphasized this has been, and continues to be, a project inspired by and worked on by young people.

Junior Organizers, one of 27 groups that received 2018 Neighborhood Success Grants, was awarded $4,000 to buy the materials needed for the project. Its members were the youngest in this year’s grant process.

Sims said that when different Harding groups, including Community Organizers, discussed what kinds of projects they wanted, most agreed there was a need for a community center away from the high school.

Cameren King, 16, a sophomore, said his goal is to teach poetry and literature at the center.

“I want to expose the people to things they may not hear or read every day,” King said. “Our grind is to make the city better for those coming up behind us.”

Both Sims and King said they hope that by the time they leave Harding, the center will be run by other young people who are coming up behind them. Each class will make the effort better than the one before it, they said.

Ashley Cobb, 15, a sophomore, agreed that the goal is to keep young people off the streets and around people who have their best interests in mind.

Darryl Spencer, who grew up and still lives in the area, stopped by the TMHA property as the kids were beginning to paint the interior rooms of their new headquarters.

“This is something that really positive,” Spencer, 29, said. “When I was growing up, I was homeless and a boxing coach provided keys to a gymnasium where I could work out and taught me how to box. I became a Golden Glove boxer and participated in the junior Olympics.

“The coach’s influence help to change my life,” he said. “Helping a program like this is something that’s been in my heart.”

Once it is opened, the center initially will operate from 4:30 to 6:30 p.m. one to two days a week. It will expand hours and days as the need dictates.

“We are extremely proud of our students who have demonstrated their leadership in seeking, and being awarded this grant,” Warren Schools Superintendent Steve Chiaro said.