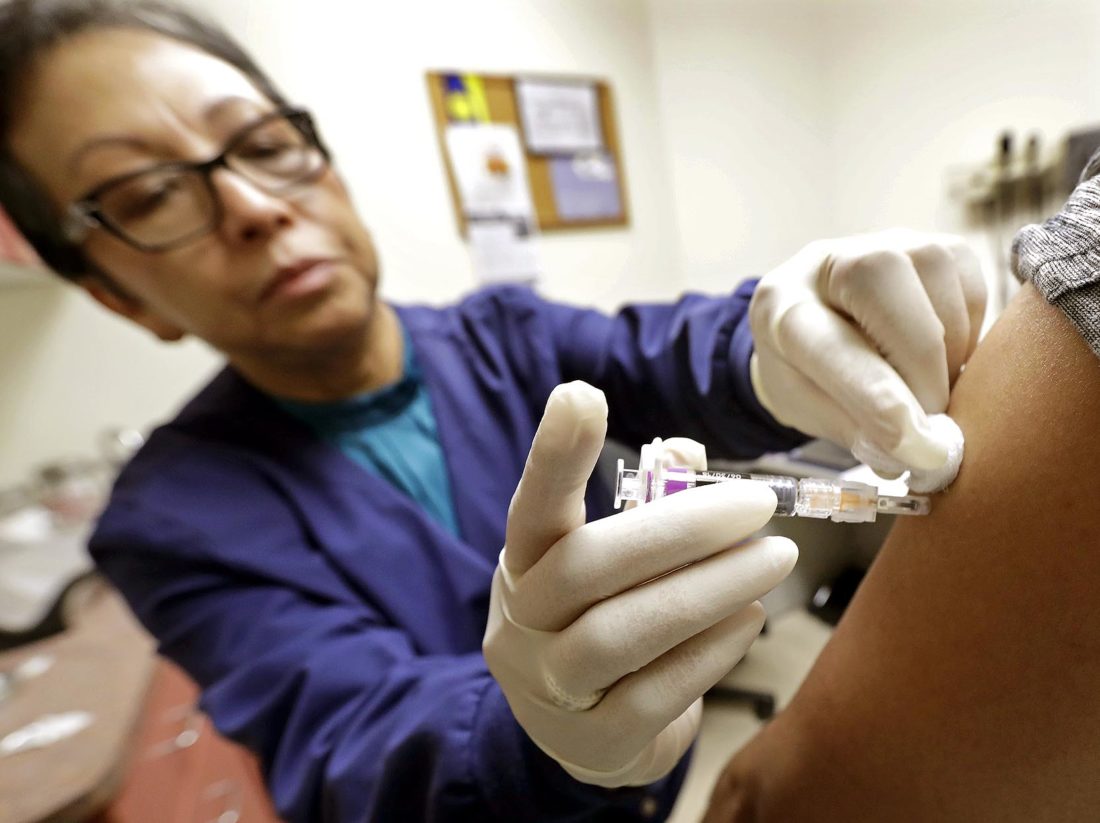 Ana Martinez, a medical assistant at the Sea Mar Community Health Center, gives a patient a flu shot, Thursday, Jan. 11, 2018 in Seattle. According to an update by the Centers for Disease Control and Prevention released Friday, Jan. 12, 2018, flu is now widespread in every state except Hawaii, but the good news is the flu season appears to be peaking. (AP Photo/Ted S. Warren)

With still more than two months left to go, this year’s flu season has been a rough one.

The season has seen the most expansive outbreak on record already, with “widespread” activity in every part of the continental United States.

“Everywhere we are seeing high levels of the flu, and we are seeing some people die from it, especially younger and older people whose immune systems aren’t as good,” said Basem Doss, a local internal medicine physician with Steward Medical Group. “But we’ve seen some people, in very healthy condition, die from it. It can develop into other infections too, like pneumonia.”

In the first week of January, there were 1,750 flu-associated hospitalizations in Ohio, more than triple the five-year average for the same time period. And as of Jan. 6, there has been a total of 3,857 hospitalizations, compared to 654 hospitalizations at this time last year. However, flu activity in Ohio last year was rated low.

“We have instituted visitor restrictions to tamper the spread of the flu, which we did last year as well, but we have instituted them a little earlier this year than we normally would,” Kandes said.

Some responsibility falls on this year’s most dominant strain of influenza, known as H3N2.

“H3N2, the one that is making everybody sick, comes around every few years and is becoming more prevalent. They call that one the problem child. It is just a bad flu,” Doss said.

As different strains are prevalent in different flu seasons, the production of the vaccine is not an exact science. Every summer, scientists responsible for producing the vaccine make an educated guess as to which strains will be most common and produce a vaccine based on this.

H3N2 was one of the strains prioritized in this year’s vaccines, but H3N2 is both a virulent strain and commonly undergoes mutations, meaning the variant used in the vaccination could be ill matched to the dominant version of the virus out in the wild.

Most viruses used in vaccines are grown in eggs, and mutations can also occur to these viruses during their growth — H3N2 is particularly susceptible to this phenomenon. This problem can be avoided by growing the virus in animal cells, but the first vaccine brand produced using this method was only just approved for distribution this year.

“Some initial reports by the CDC assess the vaccine was only 10 percent effective, but we’re hearing now it maybe upwards of 30 percent effective,” said James Kravec, the regional chief clinical officer of Mercy Health-Youngstown.

The 10 percent estimate comes from interim reports from Australia, where flu season just ended, that found the vaccine to be 10 percent effective against H3N2.

Though there is no precise data on the vaccine’s effectiveness in the U.S., the Centers for Disease Control said tests the of currently circulating H3N2 viruses are similar to last year’s H3N2 strain.

As the H3N2 component used in this year’s vaccine is identical to last year’s, the CDC believes it will have a similar effectiveness of 32 percent.

Of course, the H3N2 viruses tested could simply be unrepresentative of the majority of the H3N2 variants circulating.

“It would cover as many flu strains as possible, so they wouldn’t have to make new ones every year,” he said. “There are different methods that different countries are working on, so hopefully one day you’ll have the one flu vaccine.”

Regardless, the flu shot is still recommended.

The shot can still be effective against other circulating strains, and Kravec said even if a patient catches the flu, the antibodies the body creates in response to the shot can still lessen the severity.

“Essentially, the symptoms and outcome will be much more favorable if someone has had a flu vaccine, regardless of the strain,” he said.

Though the most severe period might be over, the flu season has a way to go. There is still time to get vaccinated, but it does take around two weeks for antibodies to develop, so the sooner the better.

Doss said if a patient does catch the flu, antiviral drugs are most effective against the flu within 48 hours of the illness beginning.

“They should [go to their general practitioner],” he said. “We have medications. Maybe they aren’t going to cure it, but they can still lessen the symptoms and lessen the length.”

He added patients should remain home and be careful to especially not expose elders and children to the flu.

“If you are running a fever and are showing flu symptoms, better not to go to work,” he said. “Let the fever break, but even then, take precautions.”