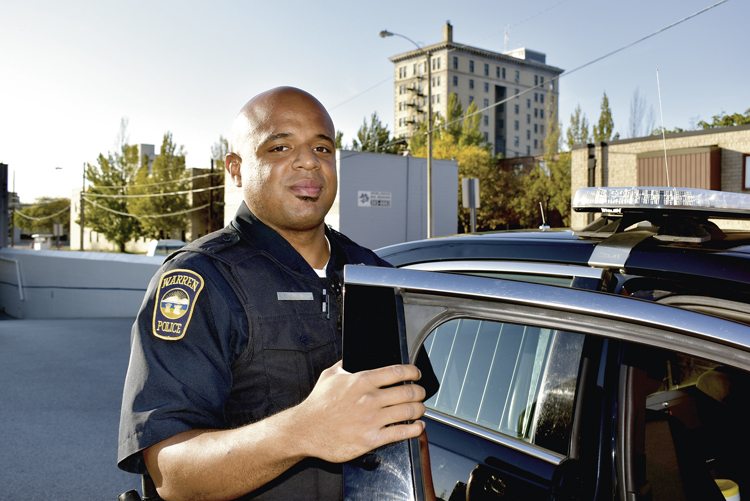 Tribune Chronicle / Renee Fox Warren city patrolman Dania Gillam has been with the department since 2013. He said he has given people Narcan to revive them from drug overdoses more than 30 times in the past year. Each time gives the user a chance to turn their life around, he said.

WARREN — The hundreds, if not thousands, of people revived from accidental drug overdoses in the last few years in the Mahoning Valley have received doses of Narcan from police officers. Local officers say they are spending much more time administering the life-saving drug while on the job.

Each year since patrolman Dania Gillam started working at the Warren Police Department in 2013, the number of accidental drug overdose deaths in Trumbull County has increased. The trend continued into this year, which is on pace to be the deadliest ever in Trumbull County.

Through mid-July, 60 people died from overdoses of fentanyl, heroin, carfentanil, cocaine and mixtures of numerous drugs.

Fifty other deaths since then are suspected drug overdoses, but their cases are awaiting the results of toxicology screenings and procedural actions. The possible 110 deaths would put the county over the record 107 in 2016.

When Gillam went through the academy in 2011, the officers in training weren’t instructed on administering Narcan — a nasal spray that can reverse the effects of an opioid drug overdose. In addition to training offered by the Trumbull County Combined Health District, Gillam and the majority of the other police officers he works with learned how to bring someone back from the brink of an opioid overdose with practice on the streets of Warren.

Hotel bathrooms, garages, bedrooms, cars, in the middle of the road, fast-food restaurants and gas stations — Gillam has seen people overdose in nearly every setting and has administered the nasal spray at least 30 times in the past year.

Some nights, the calls are non-stop.

“It comes in waves. On our worst days, we actually run out of Narcan. And that is hard because no police officer wants to be put in that situation, where you could save a person’s life who is dying right in front of you. And we also don’t want to be in the position where someone in the city isn’t getting the help they need because officers are out there responding to overdose after overdose,” said Warren police Lt. Martin Gargas.

One of the biggest strains on the department is balancing the response to other calls when some new shipment of a potent mixture comes to Warren and users start to overdose.

On nights when the calls come in one after the other, calls about barking dogs and theft go by the wayside, Gargas said. Sometimes, an officer won’t be available to take a report about a burglary until hours after the first call was placed.

With only five or six officers on the afternoon shift and ambulance companies swamped as they respond to overdoses in the city, the department doesn’t do as much “proactive policing,” Gargas said. That means officers aren’t out there looking for men and women with warrants out for their arrest. And Gargas has to triage the incoming calls and decide where to send officers first.

“Life, property and disorder. We have to respond keeping that in mind, first, protect life, then property and then resolve disorder. But on some nights, it isn’t always clear and if we let disorder or property issues go unattended for too long, we risk it turning into something that puts life at risk,” Gargas said.

Still, ask any police officer why he or she decided to work in law enforcement, and 97 percent will say it was to help people, Gargas said.

Each time a person is revived from a drug overdose, it gives him or her — a brother, sister, mother, father — another chance to turn their life around, Gillam said.

It can be disheartening when an overdose victim is revived numerous times because it shows they haven’t received the help they need, but it is even worse when someone who has been getting treatment dies the next time, Gillam said.

“You lose that chance to watch someone turn their life around. Even if just one person I revive with Narcan can survive long enough to make positive changes in their life, it is worth it,” Gillam said.

While some people can be combative when they are revived, most of the time they are confused, Gillam said.

“And plenty of them are nice people,” Gillam said.

Even though people can say harsh things about drug users who overdose, like “let them die,” most have never had to tell a mother or father their child is dead or find their loved one lying cold and blue on the floor after he or she died alone, Gillam said.

“If there is something we can do to stop that from happening, that is what we are going to do. It is our job,” Gillam said. “I became a police officer because I wanted to help people … I want to change the narrative. Policing isn’t all about the chase and arrest, it is about being in the neighborhoods and showing the community you are there to protect them.”

When the overdose wave recedes and officers have the time to patrol the streets, Gillam keeps his eyes out for anything unusual or anyone who might need help.

His Narcan kit sits between the driver’s and passenger’s seat in his cruiser.

Earlier this month, Gillam was on Niles Road SE near Oakwood Cemetery when he spotted a man stumbling. The man’s complexion also wasn’t right, Gillam said.

“I could tell from his eyes what it was,” Gillam said.

When Gillam asked the man to sit on the curb, his eyes began to roll back into his head and he started to tip over, Gillam said.

“I gave him Narcan right there on the sidewalk,” Gillam said.

Police officers are often the first to arrive on the scene of an overdose, so having Narcan to administer is essential. If a person is not overdosing, Narcan will not affect the recipient.

The drug can take a few minutes to work. Officers are trained to massage the person’s sternum to try to stimulate respiratory activity in between doses.

By blocking the body’s opioid receptors, Narcan’s temporary effects can allow a person to start breathing more normally until the opioid is out of their system.

After a person is revived, officers try to get information about where the drugs came from so they can remove them from the streets and prevent more people from dying or nearly dying.

“It’s funny because you ask them where they got it from and they say, ‘I don’t want to be a snitch. I don’t want to die,’ but they are protecting someone who nearly killed them with that poison and that dealer might be the reason he dies the next time,” Gillam said.