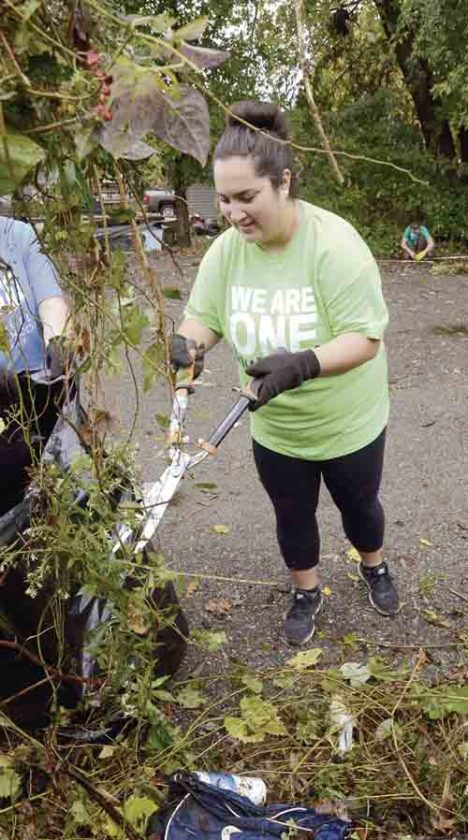 Tribune Chronicle / R. Michael Semple Volunteer Ciara Bello of Girard, a member of the Chemical Bank Chemical Cares volunteer team, in conjunction with Trumbull Neighborhood Partnership, uses hedge clippers Monday morning to cut debris while cleaning up the property at the corner of Vine and Atlantic streets NE — the site of the former Atlantic Beverage store — in Warren.

WARREN — Chemical Bank employees used their day off for Columbus Day Monday to work on beautification and cleanup efforts in the community.

“They volunteered their time on the holiday helping at different locations, helping to clean up the garden district and vacant lots,” he said. They worked in the areas of Atlantic, Olive and Union streets, and Tod Avenue SW.

Also on Monday, a $900 donation from area Realtors helped upgrade a popular basketball court in the Garden District neighborhood.

A ribbon-cutting was held Monday morning at the court at the corner of Belmont Street and Mercer Avenue NE for a $1,200 basketball hoop system. The original hoop was installed in 2016, but according to Trumbull Neighborhood Partnership President Matt Martin, it couldn’t hold up because of the frequent use.

Helping out were real estate agents from the Howland office of Northwood Realty Services.

“We knew how popular the hoop was, and when we heard it needed an upgrade, agents from this office pooled their money to make it happen. We know how important these kinds of initiatives are to neighborhoods, and we were glad to help,” said Steve Ferrebee, manager of the Howland office and member of the TNP board.

The Realtors raised about $900, Martin said, with the remaining cost being picked up by a city of Warren grant.

Belmont Street neighbor Connie Jones said a lot of the middle school and high school children in the neighborhood use the court. Jones said she is glad the hoop has been fixed because the basketball games had to be stopped during the summer.

“I have a grandchild who will use it,” Jones said as she held one of two new basketballs that were also donated in the project.

As a part of its “Lots to Love” Program, TNP also installed a second hoop along Palmyra Road on the southwest side, which Martin said remains in fully functional condition.