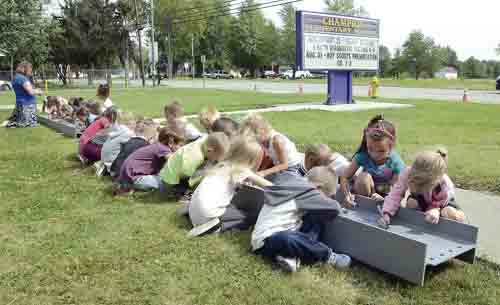 Tribune Chronicle / R. Michael Semple Kindergarten students from Champion Elementary School on Monday sign their names to construction beams that will be used in the new PK-8 school complex under construction now.

CHAMPION — Students at Champion Central and Champion Middle schools spent Monday signing their “John Hancock” to large construction beams that will be part of the new PK-8 school complex under construction now.

At the elementary school, students went out in waves at the beginning of each hour through the afternoon, said Principal Alexandra Nannicola.

Hundreds of students signed in marker on the large metal beams that will be part of the $31 million, 127,000-square-foot complex on state Route 45, south of Champion High School. The building will have separate sections for younger and older students.

The project is on schedule and is expected to be done next summer.

“We should be under roof by the end of December. Interior work will continue through the winter, starting in January,” said Superintendent Pamela Hood.

Hood said the school board next month will begin seeking bids for playground equipment and furniture for the building as well as to tear down the elementary and middle schools. The schools will be razed when the new school opens for the 2018-19 school year.

And, to let the public see what construction has taken place, public tours have been set for 4 to 7 p.m. Oct. 4 and 10 a.m. to 1 p.m. Oct. 7 with construction officials there to guide visitors. People will be bused to the site from the high school, Hood said.

“People will be able to see where classrooms, the gym, and offices will be in the new building,” she said.

Work crews from 19 subcontractors and companies, including excavators, electricians, masons and plumbers, have been working in separate areas of the school as the exterior walls of the building have gone up.

The two-story middle school section, with two grades on the first floor and two on the second floor, is on the western side of the property directly off Route 45. The single-story elementary section is on the eastern section of the property. A large gym, offices and main entrance area separate the two sections.

Board President Kelly Boyle has said the board is pleased the project has been moving forward on time. “This is a project the community is looking forward to seeing,” he said.

Voters approved a 4.4-mill bond issue to raise $13.8 million to provide the school district’s share of the building project.

The Ohio Facilities Construction Commission provided the remaining $17.5 million. The agency determined the schools needed to be replaced due to age.