JFK students clean up on day of service 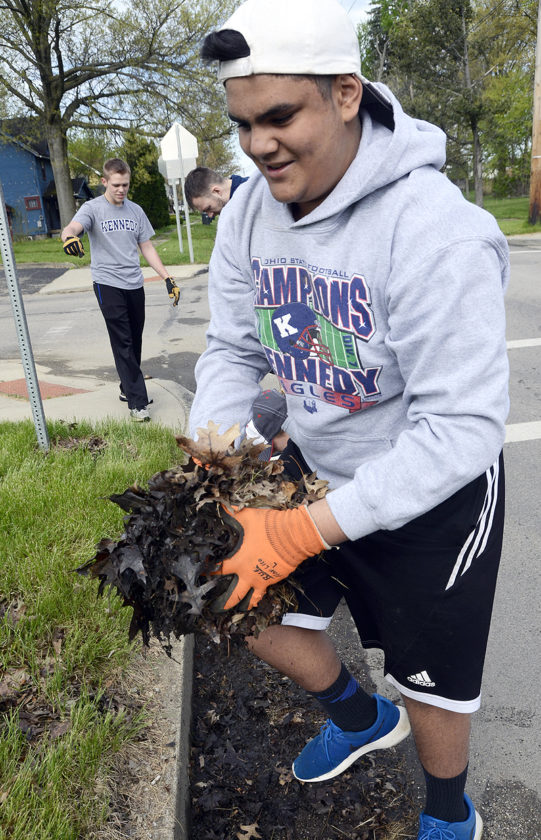 WARREN — Neighborhoods around John F. Kennedy Catholic High School are much cleaner thanks to a cleanup day undertaken by its students.

The students covered an area stretching from Niles Road SE to Central Parkway Avenue SE, going up and down Burton, Brier, Milton, and Wick streets. Approximately 150 people participated, picking up garbage and cleaning ditches along the roads, as well as cleaning up the property around the St. Vincent de Paul Society on Niles Road SE.

In some places, students would find anything from pop cans to air conditioner units, while the ditches along Wick Street SE had to be cleared to prevent water from collecting and flooding people’s basements.

The cleanup project began a few years ago, when it was decided students in grades 9 through 11 should spend their school service retreat day helping the community in some way, according to Tina McCue, Director of Religious Development and Catholic Identity at JFK.

“We felt it was really important to take care of our neighbors,” McCue said.

To make this happen, the school partnered with Trumbull Neighborhood Partnership to find out what the students could do. Working with institutions such as churches or schools is something TNP has done in the past when organizing community activities, according to Executive Director Matt Martin.

“I think the kids are really enjoying the service aspects and the camaraderie of working together,” Martin said.

A truck from TNP was made available to distribute garbage bags, bottled water and other supplies to the students. As the cleanup progressed, the truck switched to picking up bags of leaves and garbage.

Two students, Phillip Loges, 16, and Chris Wichek, 17, both of Warren and both juniors, said they were a little surprised at the initial announcement their retreat day would be spent cleaning the neighborhood around the high school. However, their opinions quickly changed as the cleanup commenced and the many students began to see the fruits of their labor.

“It’s eye opening the stuff we can do to improve the neighborhood around us,” Loges said.

“You’ve got to find some stuff that’s stuck in the ground but it’s pretty easy, anyone can do it,” Wichek said.

Other students, such as Taylor Honsaker, 15, of Warren, who is in the 9th grade, were excited since the project’s first announcement. Warren has always been Honsaker’s home, and even though she has seen parts of the city deteriorate, the opportunity to beautify her community was something Honsaker jumped at.

“Being a Catholic at a Catholic school, I think it’s our responsibility to give back to Warren,” Honsaker said.

Even though this was the first retreat day the students spent helping the community, McCue said the school and Trumbull Neighborhood Partnership are already planning on what can be done next year. This included having the students on Friday look at what they can potentially do and forming a student committee that can work with TNP.