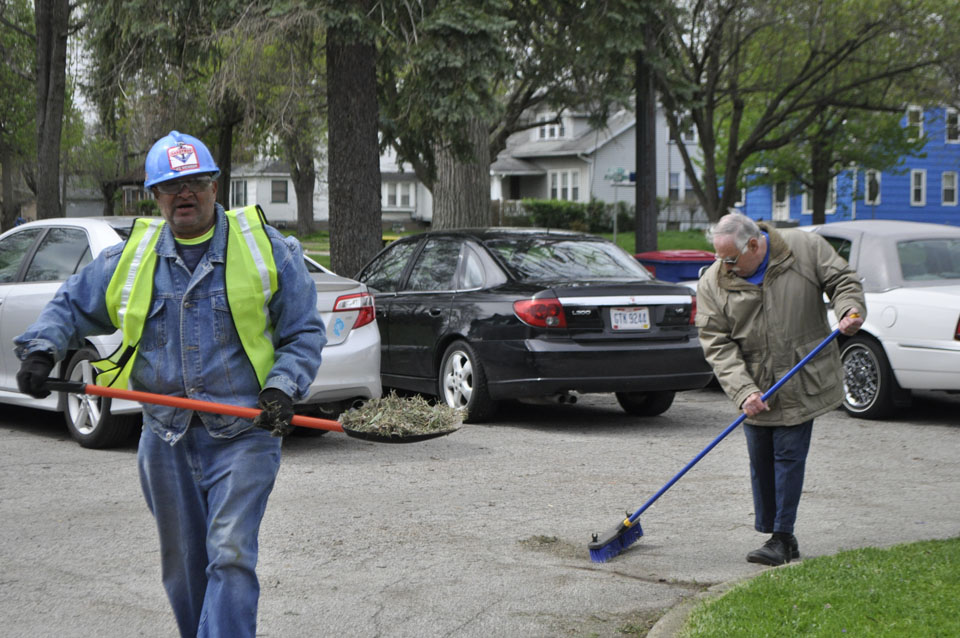 Earth Day attracted dozens of volunteers who cleaned up their communities all over the county on Saturday.

In one of the best-attended cleanups in Warren’s recent history, gloved volunteers flocked to several locations around the city, organizers said.

Denise Rising, community outreach coordinator at Trumbull Neighborhood Partnership, said about 65 volunteers showed up to events last year. Halfway through the day Saturday, more than 75 had shown up at the various locations — the Giving Tree Garden on Vine and Scott streets, in the areas around Willard PK-8 where the South East Side Community Association and the Kenmore Neighborhood Association worked, and at Belmont and Mahoning avenues, where the Historic Perkins Homestead Neighborhood Association contributed.

D’Andre Bowers, executive director of Warren Neighborhood Initiative, estimated 150 people did something to help the clean up on the southwest side — including about 80 Warren G. Harding High School football players.

Headquartered at Quinby Park on Austin Street SW, where members of Community Concerned Citizens II beautified the park, Bowers also drove about 30 volunteers to other areas on the southwest side.

“We canvassed the 6th Ward to find out what areas had the most critical need for attention. We settled on several areas, including Risher Road,” Bowers said.

Some of the southwest side’s heaviest pollution is concentrated in the dead-end street’s ditches, Bowers said. The litter contributes to flooding, so cleaning up the area will do more than just make it more aesthetically pleasing. Volunteers also worked to clear areas around vacant houses, which have been treated like trash heaps, Bowers said.

“Earth Day can bring people together, get people who are looking out their windows at what we are doing outside and helping,” McKinzie said. “People pay their taxes, but are too scared of crime to come out. But when they see us out there, it can make a difference in the community,” McKinzie said.

McKinzie said preparing Quinby Park for the summer will set the stage for summer events being planned. A jazz festival is going to be held there, and other events are being planned, all designed to bring the community together over food and company, like it used to be in that neighborhood, McKinzie said.

Vince J. Flask came out to push a broom and help in other ways because, he said, he remembers the days he spent there as a child.

“It was back when the city still did things. I ice skated here and I fished here. In the winter, the fireplace would be going in (the shelter) and the city guys would come out and clean the ice for when us kids got out of school. I figured I wasn’t doing anythign today, so I came out to do what I could to bring that kind of thing back,” Flask said.

The Tribune Chronicle’s eighth annual Earth Day free recycling and shredding event is 7 a.m. to 7 p.m. Monday in the rear parking lot of the newspaper, at the corner of Vine Avenue SE and South Street SE.

Staff members will be present to help with unloading at the drive-through dropoff. From 9 a.m. to noon, Protect-n-Shred of Cortland will be available. Residential shredding is limited to four boxes or bags per household.

Some of the items that will be taken include junk mail, envelopes, newspapers, magazines, encyclopedias and other thick items, like manuals and telephone books.