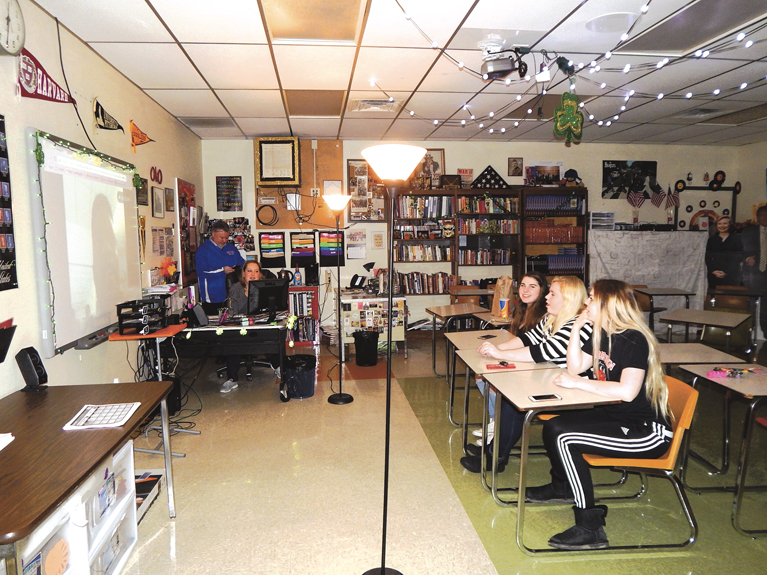 LORDSTOWN — Once a week, government students at Lordstown High School spend time communicating via Skype with students at Grand Arts High School in Los Angeles as part of a learning arrangement that connects teens from across the nation and allows them to discuss varying political views.

”He reached out to Lordstown schools with an invitation to help his students work on a project called ”The LA Museum of Ohio,” said Armstrong who previously has spoken to the NPR reporter who contacted him.

The Los Angeles students wanted to connect with peers on the “other side” of the country’s political divide, and share the experience in a student-created pop-up museum on their campus in downtown Los Angeles near Disney Hall.

Gozonsky, in a recent Skype interview, said ”We are interested in the everyday aspects of Lordstown and Ohio life, particularly the teen perspective on topics such as fashion and sports. We wanted to start with easily-relatable topics as we all get to know each other, and then move into discussing politics once we have established some familiarity.

”We feel very fortunate to have made the connection. My students have been captivated to have a connection with teens in Ohio. We started the project to reach out to people who might have a different political perspective. In the process of discovering common ground, the students have related on topics that are universal.”

Students on both sides of the country have exchanged packages and letters in the mail and Lordstown sent a package containing buckeyes, scrapbooks and Lordstown’s student newspaper, ”The Devils Advocate.”

Matt and Priscilla, students from Los Angeles, talked about the weather, politics and society and asked about life in Ohio. The students were especially interested in the Lordstown students’ trip to the presidential inauguration.

Hannah Emerson, a Lordstown senior, said ”The inauguration was fun but we had to get up at 2 a.m. in the morning. We stood there for hours waiting for it to start. (President) Trump was very presidential and came off very strong.”

”We asked them to send us stuff that represents California. We are planning to send them another type of buckeyes with peanut butter and chocolate that people can eat,” she said.

The Los Angeles students said they were surprised how rural and small Lordstown is and how the weather changes so quickly in Ohio.

”They are a much bigger school than we are,” Armstrong said.

Lindsay Burns, a Lordstown junior, said she learned the Los Angeles students don’t ride buses but rely on other transportation to get to school, such as Uber.

Maya Kresic, a Lordstown senior, said ”They seem a lot like us and do what we do and enjoy the same movies and activities at school that we do.”

Gibson said one of the Los Angeles students once remarked that the Lordstown students “sound just like us.”