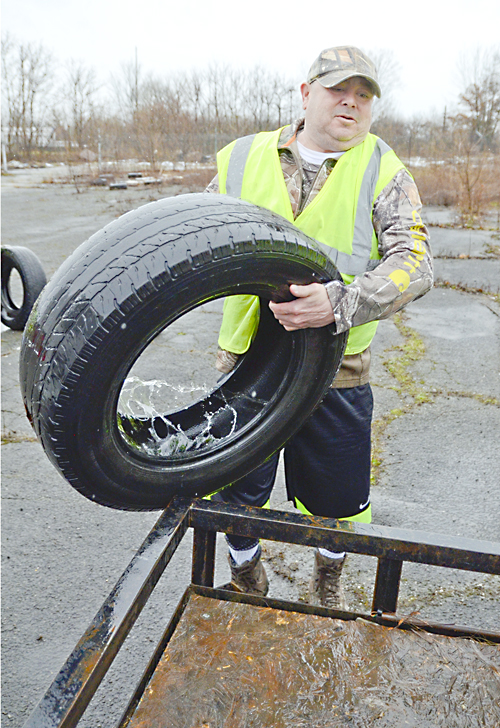 030117...R COMM SERVICE 1...Warren...03-01-17...Nicholas Vecchiarelli of Hubbard, a success story with the Community Service Sentencing Program, loads a tire onto a trailer from a vacant lot in Warren Wednesday morning...by R. Michael Semple

WARREN — In 2013, police found Nicholas Vecchiarelli pacing in his driveway, holding a police scanner and a green laser light. It was the laser that minutes earlier “lit up” a news helicopter from Cleveland that had flown over to cover area high school football games.

Vecchiarelli, 49, of Hubbard, surrendered peacefully. He pleaded guilty to a second-degree felony charge.

“My father had recently passed away and I was drinking a lot at that time,” Vecchiarelli said. “I was kind of lost without him. I wasn’t sober. My mom told me that I couldn’t drink him back.”

Trumbull County Common Pleas Court Judge Ronald Rice fined Vecchiarelli $1,000 and sentenced him to five years of probation for interfering with the operators of an aircraft with a laser. He was also ordered to perform 200 hours of community service, given an 11 p.m. curfew, and ordered to stay out of liquor establishments. Vecchiarelli says he’s been sober since.

It was while working off his community service that Vecchiarelli found someone who could restore direction in his life — Nick Bellas, the court-ordered community service supervisor for Trumbull Neighborhood Partnership.

Vecchiarelli said his first thought when he began community service was, “I never want to see that man again. He’s scary.”

But then . . . “What he (Bellas) does for Trumbull Neighborhood Partnership, and the discipline and principles of hard work he demands helped me see and repent the error of my ways,” Vecchiarelli said. “I learned my lesson. He helped me through the court system. He actually goes to court with people.

“He has such passion for the city. I really didn’t want to quit going. He brought the goodness out of me,” Vecchiarelli said.

Before the TNP job, Bellas worked as an attendance officer for Warren City Schools, as a part-time police officer in Bazetta and in Howland, and with Trumbull County Children Services. He also was a U.S. Coast Guard reservist.

Bellas said, “Nick was one of the more enthusiastic participants in the program. I think Nick is a personable guy. I think he is genuine in what he says, and I appreciate that.”

Bellas said there were only a couple of times when he had to reel Vecchiarelli back into the tasks at hand. Once, Vecchiarelli wandered off to a fast-food establishment when he should have been at the site.

“Unlike some participants I have had, Nick was pretty reliable,” Bellas said. “He had a lot of energy. He could complete most tasks without being asked twice.”

“The Court Community Service Program is one of our most long-standing programs. It allows us to engage residents that have minor legal troubles in productive and impactful efforts to improve their neighborhoods,” said Matt Martin, executive director.

Jeff Hovanic, bailiff for Warren Municipal Court Judge Thomas P. Gysegem, said, “This program has provided the court’s judges an alternative to costly incarceration, for those defendants that qualify, to perform community service in lieu of jail time.

Said Bellas, “It’s a good job. A lot of tangible things come out of this job. The best part is that the program makes a difference. We can help out.”

“The court is giving them an opportunity to avoid jail or take care of some of the fines and costs. They are actually doing very tangible things for the community they live in,” Bellas said.

Vecchiarelli said he was offered community service as an alternative to an eight-year prison term because it was his first major offense.

“I was outside in the back (with the laser light he said he’d just bought). I was flashing it around and goofing off.”

The camera operator in the helicopter told police he saw the green laser several times as it flew over the Hubbard area. Vecchiarelli said he didn’t realize he was being reckless because the helicopter was so far away, but “when I was arrested, I realized I did something bad. I was honest. I did something while goofing off, something stupid, and there were repercussions.”

Vecchiarelli was not employed during his community service stint. At the beginning, he would do his service for half a day. Near the end, he committed to an eight-hour shift. He worked an additional 50 hours of community service to work off his fines and costs from the case, Bellas said.

“I did it in like a month and half,” Vecchiarelli said.

Last year, Bellas and his groups picked up 1,064 tires from front yards of vacant properties in Warren. He has about 20 people assigned to him.

“Some are doing the work, some haven’t started yet. I try to be flexible with people with work and school. But if hey are unemployed, I try to get their sentence requirements done at a faster pace,” he said.

Most of the tires are stored in a vacant house on Elm Road NE until they can be disposed of properly.