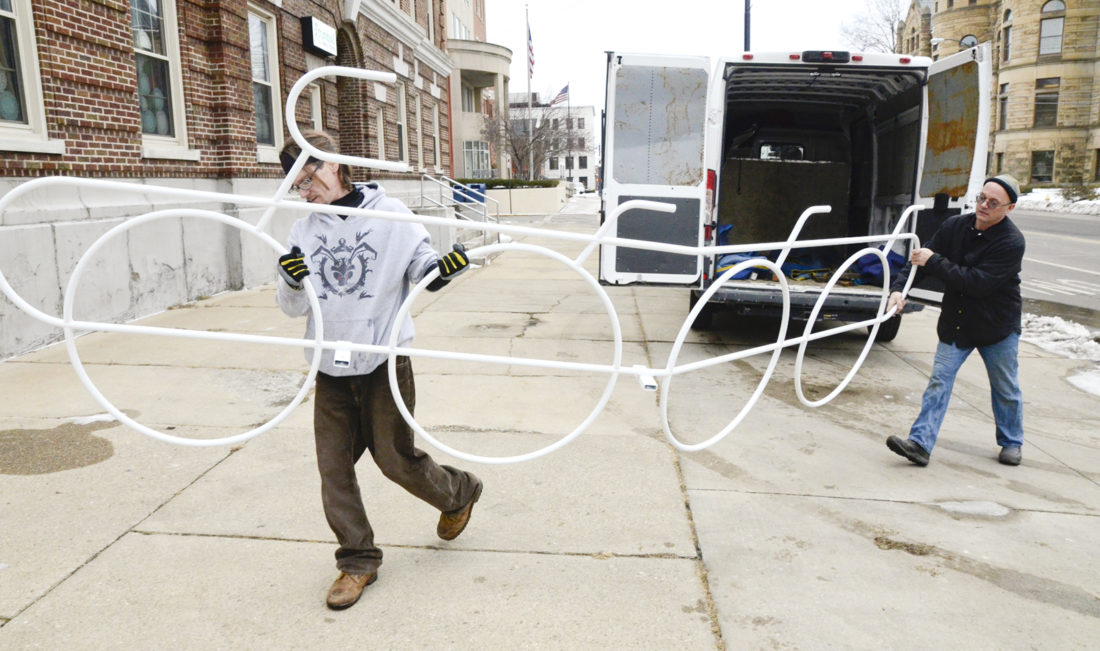 WARREN — It wasn’t bicycle weather as Doug Meyer and Carl Henneman worked to install the first of four bike racks that will double as public art projects in the city.

Meyer, a metal artist who lives in Warren and has a workshop in Garrettsville, had to shovel away snow before securing the 12-foot long sculpture made from 1-inch tubular steel outside Trumbull Family Fitness near the corner of High Street NW and Mahoning Avenue NW.

He was commissioned by Trumbull Neighborhood Partnership, which received a $4,000 grant from the Ohio Arts Council to finance four dual-purpose pieces that would be both functional and artistic.

“I’m familiar with Doug’s work,”said Henneman, who is working with TNP through AmeriCorps VISTA, a federal program that works with communities to overcome poverty. “He was one of the first artists who came to mind, and I contacted him to get a proposal in. He made a scale model of this, and it blew everyone away.”

“He was really good to do first, because he’s done this kind of work a lot and on a pretty big level. He has his own workshop. I just knew he could do it and pull it off,” Henneman said.

The men installed the rack Thursday.

Meyer, founder of Rustbelt Rebirth, which manufactures furniture and other items made primarily from found and reclaimed materials, had to use new steel for the bike rack.

The rack is four wheel-like metal circles and bent steel that resembles handlebars.

“I had to roll the forms, bend the tubes,” he said. “I can’t find 1-inch tube consistently enough to manufacture at this level.”

Because of budget constraints, Meyer said he had to go with painted steel instead of stainless steel, but he likes the idea of having a public art piece in the city where he lives and sees the value in these types of projects.

“I think great art makes a city great,” Meyer said. “Go to Chicago and see some of the giant sculptures that are downtown and how they change a public space. From the bland architecture of yesteryear to the strip mall-izing of our surroundings, we’re bombarded by ugly aesthetics every day, so it’s nice to have something to draw attention away from that and be engaging.”

“The larger theme is reclamation of vacant space,” Martin said. “Public art is another version of that, from our murals to the other public art we’ve supported over the years. Ultimately, what we’re talking about is reclaiming space.”

TNP will be accepting proposals from other artists for the other three sites: the northwest corner of High Street NE and Vine Avenue NE, the southwest corner of Washington Street NW and North Park Avenue and southeast corner of Laird Avenue SE and Youngstown Road SE. All four sites are located near stops on the Western Reserve Transit Authority bus line.

Proposals will be a judged and selected by a three-member panel featuring Martin, Bill Mullane from the Fine Arts Council of Trumbull County and a third person connected to each site. Artists interested in submitting proposals for the other projects can call Henneman at 330-553-4658 or email carl@tnpwarren.org.

In addition to the bike rack installed near Trumbull Family Fitness, proposals are being accepted for three other sites: the northwest corner of High Street NE and Vine Avenue NE, the southwest corner of Washington Street NW and North Park Avenue and southeast corner of Laird Avenue SE and Youngstown Road SE. Artists interested in submitting proposals for the other projects can call Carl Henneman at 330-553-4658 or email carl@tnpwarren.org.