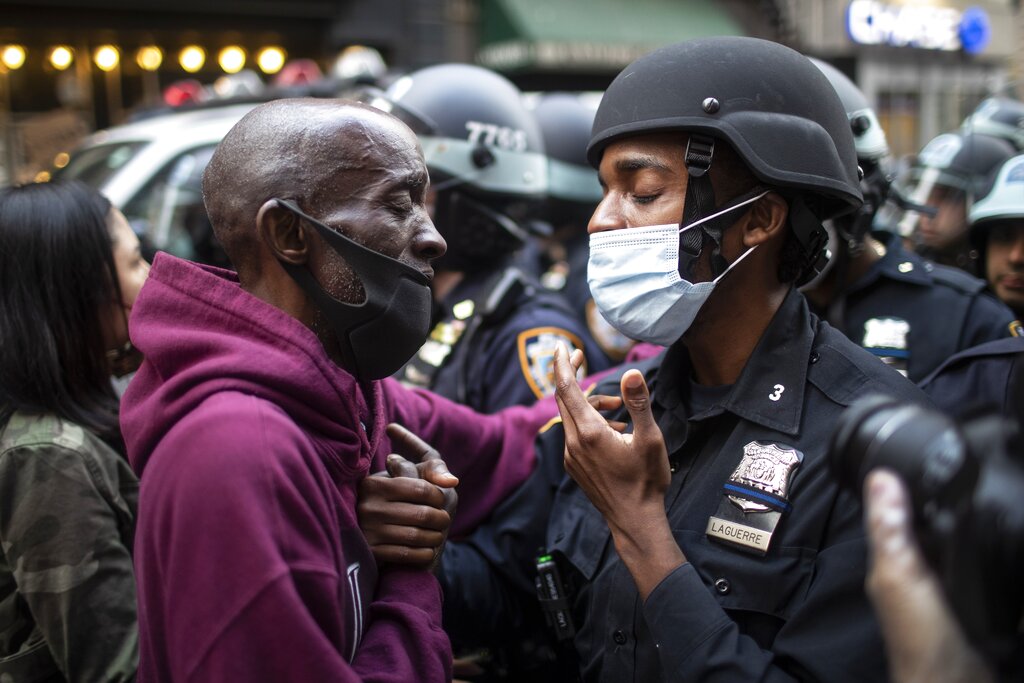 A protester and a police officer shake hands in the middle of a standoff during a solidarity rally calling for justice over the death of George Floyd Tuesday in New York. Floyd died after being restrained by Minneapolis police officers on May 25. (AP Photo/Wong Maye-E)

MINNEAPOLIS (AP) — Protests were largely peaceful and the nation’s streets were calmer than they have been in days since the killing of George Floyd set off sometimes violent demonstrations over police brutality and injustice against African Americans.

Earlier curfews and efforts by protesters to contain the lawlessness prevented more widespread damage to businesses in New York and other cities overnight.

By this morning, arrests had grown to more than 9,000 nationwide since the vandalism, arson and shootings erupted around the U.S. in reaction to Floyd’s death May 25 in Minneapolis. At least 12 deaths have been reported, though the circumstances in many cases are still being sorted out.

In Washington, where authorities ordered people off streets before sundown, thousands of demonstrators massed a block from the White House on Tuesday evening, following a crackdown a day earlier when officers drove peaceful protesters away from Lafayette Park to clear the way for President Donald Trump to do a photo op with a Bible at a church. A black chain-link fence was put up to block access to the park.

“Last night pushed me way over the edge,” said Jessica DeMaio, 40, of Washington, who attended a Floyd protest for the first time. “Being here is better than being at home feeling helpless.”

Pastors at the church prayed with demonstrators and handed out water bottles. The crowd remained in place after the city’s 7 p.m. curfew passed, defying warnings that the response from law enforcement could be even more forceful. But the people were peaceful, even polite.

At one point, the crowd booed when a protester climbed a light post and took down a street sign. A chant went up: “Peaceful protest!”

Pope Francis called for national reconciliation and peace, saying he has ”witnessed with great concern the disturbing social unrest” in the U.S.

“My friends, we cannot tolerate or turn a blind eye to racism and exclusion in any form and yet claim to defend the sacredness of every human life,” he said.

Trump has pushed the nation’s governors to take a hard line against the violence, tweeting on Tuesday that “lowlifes and losers” were taking over New York’s streets. He again tweeted this morning: “LAW & ORDER!”

Thousands of people remained out in New York City on Tuesday night, undeterred by an 8 p.m. curfew, though most streets were clear by early today. Battered storefronts from the earlier rounds of violence could be seen in midtown Manhattan.

“God as my witness, change is coming,” Art Acevedo said. “And we’re going to do it the right way.”

More than 20,000 National Guard members have been called up in 29 states to deal with the violence.

In Philadelphia, a statue of former Mayor Frank Rizzo was removed by the city early today after repeatedly being targeted by vandals. Rizzo presided over a police force widely accused of racism and brutality in the 1970s.

Floyd died after a white Minneapolis police officer pressed his knee against the handcuffed black man’s neck as he cried that he couldn’t breathe. The officer, Derek Chauvin, has been fired and charged with murder.

The mother of Floyd’s 6-year-old daughter, Gianna, said she wants the world to know that her little girl lost a good father.

“I want everybody to know that this is what those officers took,” Roxie Washington said during a Minneapolis news conference, her daughter at her side. “I want justice for him because he was good. No matter what anybody thinks, he was good.”

Minnesota is investigating whether the Minneapolis Police Department has a pattern of discrimination against minorities.

Some protesters framed the burgeoning movement as a necessity after a long list of killings by police.

“It feels like it’s just been an endless cascade of hashtags of black people dying, and it feels like nothing’s really being done by our political leaders to actually enact real change,” said Christine Ohenzuwa, 19, who attended a peaceful protest at the Minnesota Capitol in St. Paul.