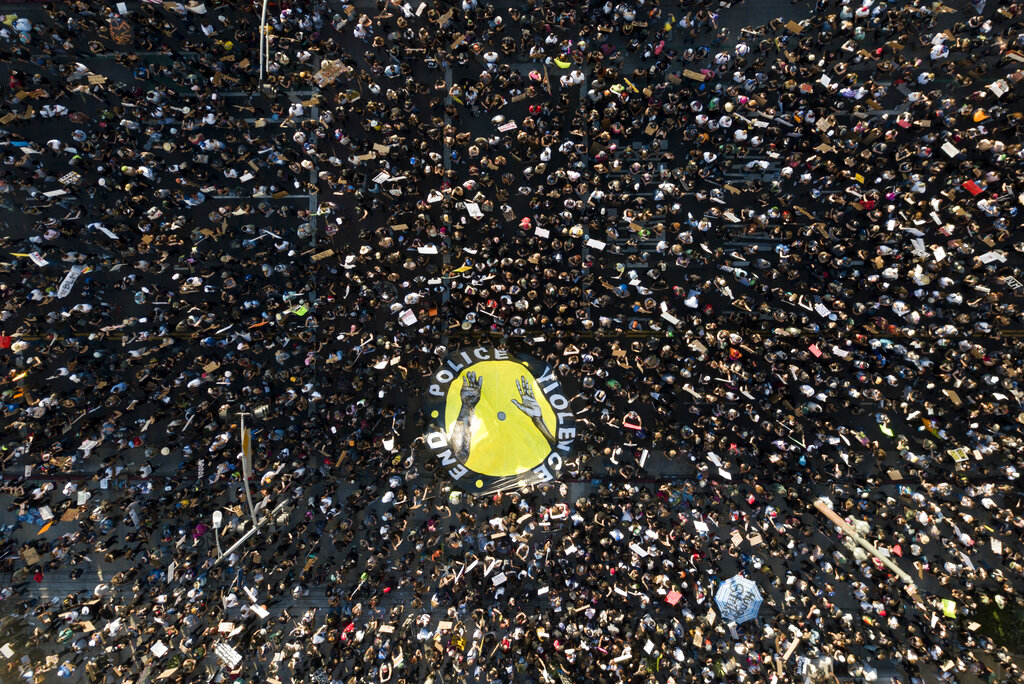 Demonstrators take part in a protest, Wednesday in downtown Los Angeles, sparked by the death of George Floyd, who died May 25 after he was restrained by Minneapolis police. (AP Photo/Ringo H.W. Chiu)

MINNEAPOLIS (AP) — Demonstrations in cities across the U.S. to condemn racism and police abuses remained large but turned notably more subdued on the eve of memorial service today for George Floyd that kicks off a series of events to mourn the man whose death empowered a national movement.

The calmer protests came on the same day that prosecutors charged three more police officers and filed a new, tougher charge against the officer at the center of the case.

If convicted, they could be sentenced to up to four decades in prison.

The move by prosecutors punctuated an unprecedented week in modern American history, in which largely peaceful protests took place in communities of all sizes but were rocked by bouts of violence, including deadly attacks on officers, rampant thefts and arson in some places.

Nationwide, more than 10,000 people have been arrested in connection with unrest, an Associated Press tally shows. More than a dozen deaths have been reported, though the circumstances in many cases are still being sorted out.

Floyd’s name has become a rallying cry in other countries, too, unleashing protests against police violence and racial injustice.

In the U.S., protests were still big, but largely peaceful in California, where NBA stars Steph Curry and Klay Thompson marched with protesters in Oakland.

Some demonstrators lay down to represent the amount of time a white police officer pressed a knee into Floyd’s neck while he pleaded for air. But police kept a mainly hands-off policy during the day even after curfews took effect.

The first of three memorial gatherings for the man whose name has been chanted by hundreds of thousands of people was planned this afternoon in Minneapolis at a service where the Rev. Al Sharpton, the civil rights leader, and family attorney Ben Crump will speak.

Floyd’s body will then travel to Raeford, North Carolina, where he was born 46 years ago, for a public viewing and private family service Saturday.

There will be a large service Monday in Houston, where Floyd spent most of his life, and will include addresses from Sharpton, Crump, and the Rev. Remus E. Wright, the family pastor. Former Vice President Joe Biden, the presumptive Democratic presidential nominee, may attend. A private burial will follow.

Crump called the additional charges against the officers “a bittersweet moment” and “a significant step forward on the road to justice.”

After the new charges were announced, Minnesota Gov. Tim Walz, said the state and nation need to “seize the moment” and use the wrenching events of the past week to confront the effects of racism, including unequal educational and economic opportunities.

“I think this is probably our last shot, as a state and as a nation, to fix this systemic issue,” he said.

Hundreds of protesters were in New York City’s Washington Square Park when the charges were announced.

“It’s not enough,” protester Jonathan Roldan said, insisting all four officers should have been charged from the start. “Right now, we’re still marching because it’s not enough that they got arrested. There needs to be systematic change.”

But the mood in New York turned somber later in the day after a police officer on an anti-looting patrol was ambushed by a man who walked up behind him and stabbed him in the neck. That set off a struggle in which two other officers suffered gunshot injuries to their hands.

The other officers — Thomas Lane, J. Kueng and Tou Thao — face the same maximum penalties for aiding and abetting. All three men were in custody by Wednesday evening.

The multiple charges against each officer would offer a jury more options to find them guilty.

Also Wednesday, the Hennepin County Medical Examiner’s Office released the full autopsy report on Floyd, which noted he had previously tested positive for COVID-19 but was apparently asymptomatic. The report was released with the family’s permission after summary findings Monday that said he had a heart attack while being restrained by officers.

President Donald Trump has pushed the nation’s governors to take a hard line against the violence. He again tweeted Wednesday: “LAW & ORDER!”

An overpowering security force — including officers from the FBI Hostage Rescue Team, the Secret Service, the Drug Enforcement Administration, the Bureau of Prisons and, according to a senior defense official, at least 2,200 National Guard soldiers — was out in force Wednesday as thousands of peaceful protesters demonstrated in the nation’s capital.

Military vehicles were parked on streets near the White House. An FBI plane, an Army surveillance plane and a Park Police helicopter circled overhead.

At one point near the White House, protesters began singing “Amazing Grace” as they knelt in view of officers in riot gear. “We are not going anywhere!” they chanted. There were no signs of confrontations.

Protester Jade Jones, 30, said the demonstrations would continue despite the new charges.

In New York City, where high-end stores were looted in earlier days, some retailers fortified their property. At the luxury department store Saks Fifth Avenue, windows were boarded up, then covered in chain-link fencing and razor wire. The front of the store was guarded by a line of tattooed men with dogs.

When other black men were killed at the hands of U.S. police in recent years, the news reached global headlines, but not the streets. This time is different.

Silent protesters in front of the U.S. Embassy in Paris carried signs reading “We are all George Floyd” – in French. Protesters waved banners bearing his name from Johannesburg to London, Tel Aviv and Sydney, and seized the moment to call attention to police violence, racial injustice or other problems closer to home.

“It’s a solidarity question. We stand with our brothers, internationally, our sisters as well, but the same thing is happening here. It’s no different,” Isaak Kabenge said Wednesday while a protest in Stockholm.