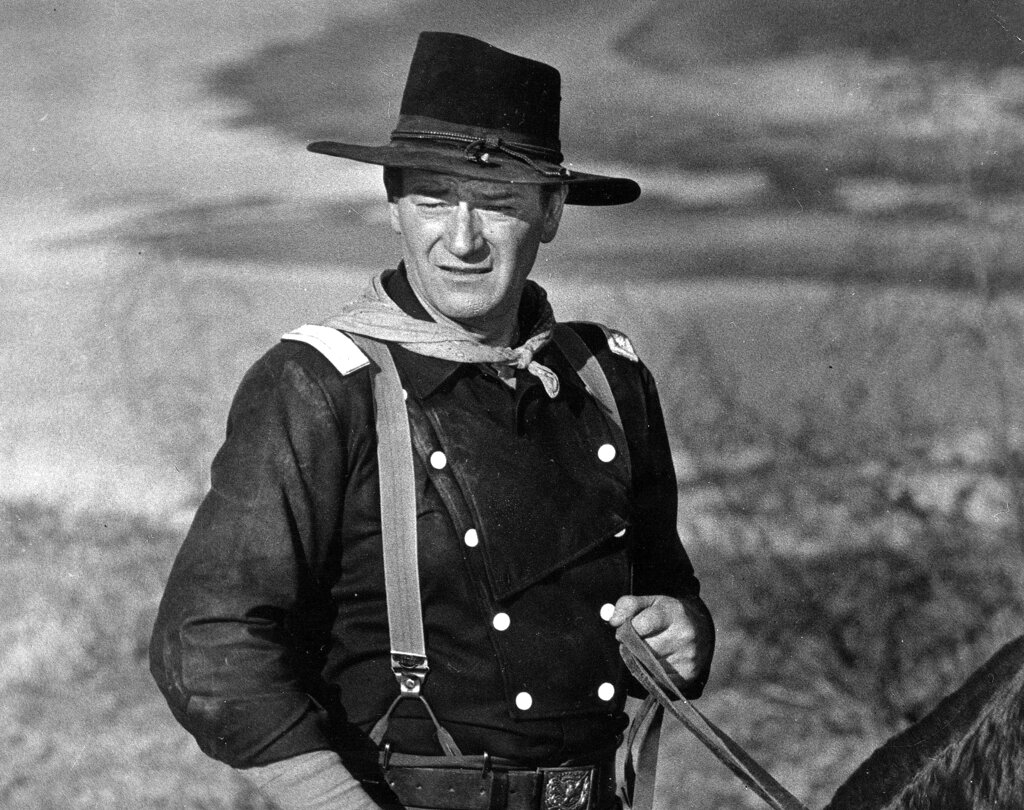 FILE - In this undated photo, John Wayne appears during the filming of "The Horse Soldiers." In the latest move to change place names in light of U.S. racial history, leaders of Orange County’s Democratic Party are pushing to drop film legend Wayne’s name, statue and other likenesses from the county’s airport because of his racist and bigoted comments. (AP Photo, File)

In the latest move to change U.S. place names tied to racist groups and ideas, leaders of Orange County’s Democratic Party are pushing to drop film legend John Wayne’s name from the county’s airport because of his racist and bigoted comments.

The request was immediately contested by the head of the county’s Republican Party, who condemned the comments but touted Wayne’s contributions as an actor and philanthropist.

The Democratic Party of Orange County adopted a resolution last week condemning Wayne’s “racist and bigoted statements” in a 1971 interview and called on the county’s board of supervisors to drop his “name and likeness” from the airport. The resolution asked the board to restore the name to Orange County Airport.

“An international airport that serves millions of people each year should not be named for someone who, in real life, opposed our nation’s values of opportunity and justice for all,” Ada Briceño, chair of the Democratic Party of Orange County, said in a statement. “Now is the time for change.”

The push to oust Wayne, a longtime county resident who died in 1979, from the airport’s name, has a lengthy history, and his bigoted statements against Black people, Native Americans and the LGBTQ community in a 1971 Playboy magazine interview are often cited as the reason it’s ill-suited to welcome visitors to the diverse Southern California county widely known for its scenic beaches and as the home to Disneyland.

In the interview, Wayne is quoted saying, “I believe in white supremacy until the blacks are educated to a point of responsibility. I don’t believe in giving authority and positions of leadership and judgment to irresponsible people.” He also said he felt no remorse for the subjugation of Native Americans and called movies such as “Easy Rider” and “Midnight Cowboy” perverted.

The airport in the heart of Orange County dates back decades and county officials voted to change the name to remember Wayne when he died in 1979. Deanne Thompson, an airport spokeswoman, said the county has no plans to change the name or remove a statue of Wayne from the airport, which served more than 10 million passengers in 2018, though the issue comes up periodically, including last year.

But the current push comes as thousands of Americans have taken to the streets to protest police brutality against Black people and systemic racism in the wake of the Minneapolis police killing of George Floyd. In many places, communities have moved to take down statues of former slaveholders — or topple them — and remove the Confederate emblem from imagery including Mississippi’s state flag.

It also comes as Orange County has gone over the past four decades from being a predominantly Republican, suburban enclave to a region of more than 3 million residents that is now home to more Democrats than Republicans. The county has also gone from being largely white to much more diverse, with large Latino and Asian communities.

The county’s board of supervisors is still comprised mostly of Republicans, even as the GOP lost four key Congressional seats in the region to Democratic contenders two years ago.

Board Chair Michelle Steel, a Republican who is seeking to unseat one of those Democratic representatives, said Monday that Wayne’s comments are “wrong and sad” but she supports keeping his name on the airport, arguing “a person should be judged on the totality of their actions and contributions to society.” She said Wayne also supported U.S. military personnel and Vietnamese refugees who arrived fleeing communism.