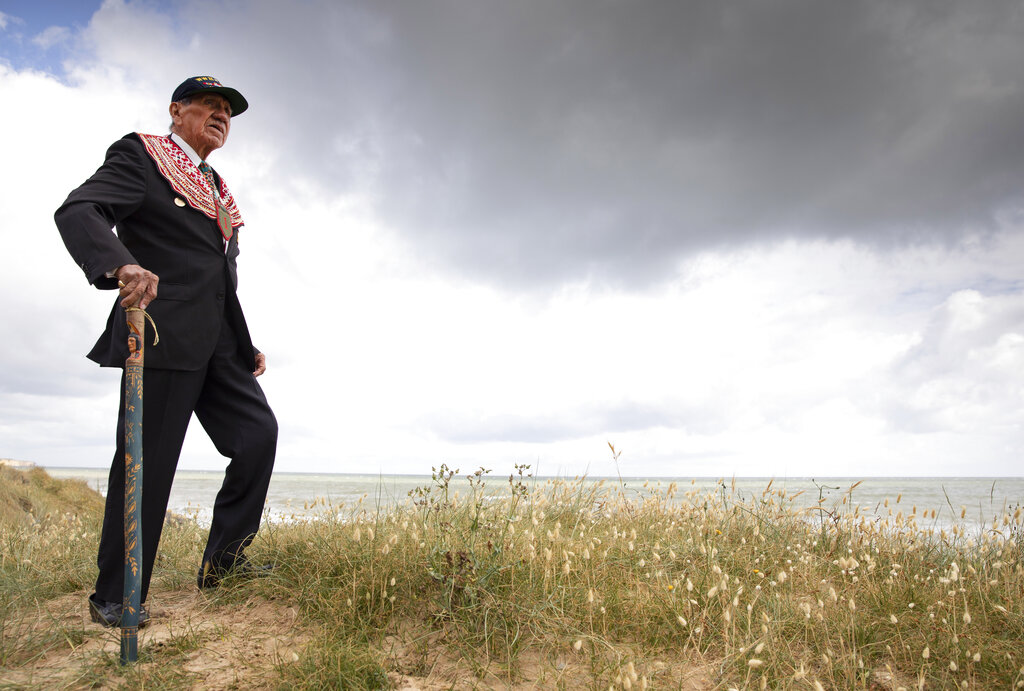 World War II D-Day veteran and Penobscot Elder from Maine, Charles Norman Shay poses on the dune overlooking Omaha Beach prior to a ceremony at his memorial Friday in Saint-Laurent-sur-Mer, Normandy, France. Saturday's anniversary of D-Day will be one of the loneliest remembrances ever, as the coronavirus pandemic is keeping almost everyone away, from government leaders to frail veterans who might not get another chance for a final farewell to their unlucky comrades. (AP Photo/Virginia Mayo)

SAINT-LAURENT-SUR-MER, France (AP) — At least the dead will always be there.

All too many have been, for 76 years since that fateful June 6 on France’s Normandy beaches, when allied troops in 1944 turned the course of World War II and went on to defeat fascism in Europe in one of the most remarkable feats in military history.

Forgotten they will never be. Revered, yes. But Saturday’s anniversary will be one of the loneliest remembrances ever, as the coronavirus pandemic is keeping almost everyone away — from government leaders to frail veterans who might not get another chance for a final farewell to their unlucky comrades.

Rain and wind are also forecast, after weeks of warm, sunny weather.

“I miss the others,” said Charles Shay, who as a U.S. Army medic was in the first wave of soldiers to wade ashore at Omaha Beach under relentless fire on D-Day.

Shay, 95, lives in France close to the beach where he and so many others landed in 1944. He knows of no U.S. veterans making the trip overseas to observe D-Day this year.

“I guess I will be alone here this year,” Shay said before he performed a Native American ritual to honor his comrades by spreading the smoke of burning white sage into the winds lashing the Normandy coast today.

The eerie atmosphere touches the French as well as Americans.

“The sadness is almost too much, because there is no one,” said local guide Adeline James. “Plus you have their stories. The history is sad and it’s even more overwhelming now between the weather, the (virus) situation and, and, and.”

The locals in this northwestern part of France have come out year after year to show their gratitude for the soldiers from the United States, Britain, Canada and other countries who liberated them from Adolf Hitler’s Nazi forces.

Despite the lack of international crowds, David Pottier still went out to raise American flags in the Calvados village of Mosles, population 356, which was liberated by allied troops the day after the landing on five Normandy beachheads.

In a forlorn scene, a gardener tended to the parched grass around the small monument for the war dead, while Pottier, the local mayor, was getting the French tricolor to flutter next to the Stars and Stripes.

“We have to recognize that they came to die in a foreign land,” Pottier said. “We miss the GIs,” he said of the U.S. soldiers.

The pandemic has wreaked havoc across the world, infecting 6.6 million people, killing over 391,000 and devastating economies. It poses a particular threat to the elderly — like the surviving D-Day veterans who are in their late nineties or older.

It has also affected the younger generations who turn out every year to mark the occasion. Most have been barred from traveling to the windswept coasts of Normandy.

Some 160,000 soldiers made the perilous crossing from England that day in atrocious conditions, storming dunes which they knew were heavily defended by German troops determined to hold their positions.

Somehow, they succeeded. Yet they left a trail of thousands of casualties who have been mourned for generations since.

Last year stood out, with U.S. President Donald Trump joining French President Emmanuel Macron at the American cemetery in Colleville-sur-Mer, on a bluff overlooking Omaha Beach. A smattering of veterans were honored with the highest accolades. All across the beaches of Normandy tens of thousands came from across the globe to pay their respects to the dead and laud the surviving soldiers.

The acrid smell of wartime-era jeep exhaust fumes and the rumble of old tanks filled the air as parades of vintages vehicles went from village to village. The tiny roads between the dunes, hedges and apple orchards were clogged for hours, if not days.

Heading into the D-Day remembrance weekend this year, only the salty brine coming off the ocean on Omaha Beach hits the nostrils, the shrieks of seagulls pierce the ears and a sense of desolation hangs across the region’s country roads.

“Last yea,r this place was full with jeeps, trucks, people dressed up as soldiers,” said Eric Angely, who sat on a seawall wearing a World War II uniform after taking his restored U.S. Army jeep out for a ride.

“This year, there is nothing. It’s just me now, my dog and my jeep,” the local Frenchman said.

Three-quarters of a century and the horrific wartime slaughter of D-Day help put things in perspective. Someday, the COVID-19 pandemic, too, will pass, and people will turn out to remember both events that shook the world.

“We don’t have a short memory around here,” Pottier said with a wistful smile.