Fri. 8:29 a.m.: Virus on rise in US, other countries with big populations 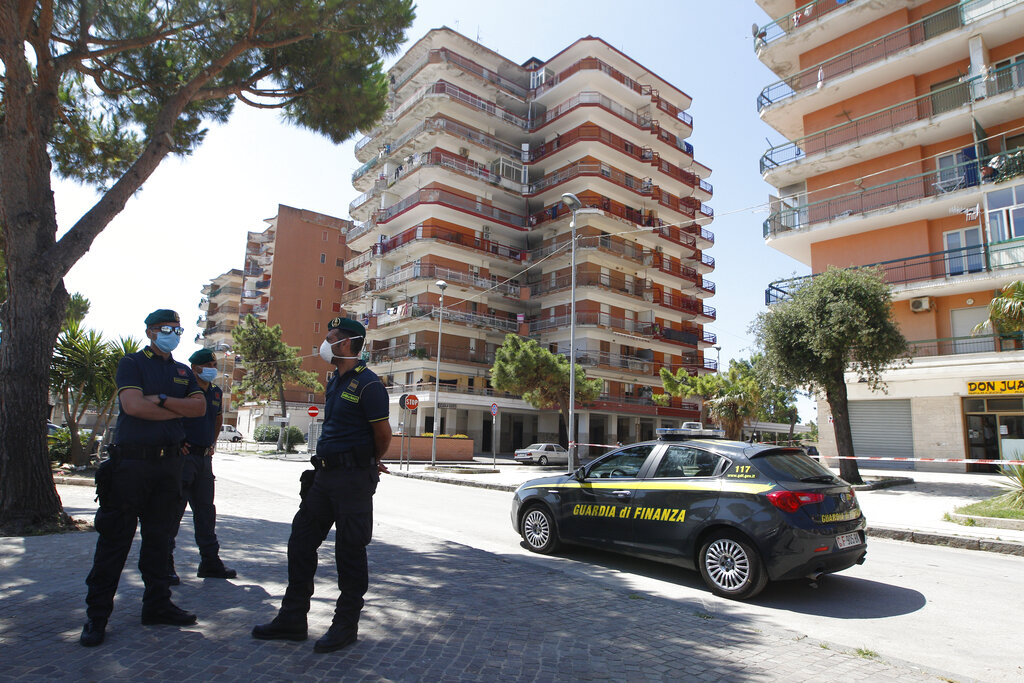 Police officers stand at a road block today in front of a big apartment complex where dozens of COVID-19 cases have been registered among a community of Bulgarian farm workers in Mondragone, in the southern Italian region of Campania. The governor of the region is insisting that the farm workers should stay inside for 15 days, not even emerging for food, and that the national civil protection agency should deliver them groceries. (AP Photo/Riccardo De Luca)

ROME (AP) — While China moved closer to containing a fresh outbreak in Beijing, the coronavirus took a stronger hold elsewhere, including the United States, where surging infections across southern states have highlighted the risks of reopening economies without effective treatment or vaccines.

Another record daily increase in India today pushed the caseload in the world’s second most populous nation toward half a million, and other countries with big populations like Indonesia, Pakistan and Mexico grappled with large numbers of infections and strained health care systems.

South Africa, which accounts for about half of the infections on the African continent with 118,375, reported a record 6,579 new cases, as transmissions increase after it loosened what had been one of the world’s strictest lockdowns earlier this month.

Britain’s health secretary, Matt Hancock, warned that the government has the power to act to prevent overcrowding that could cause new infection spikes. He was responding to scenes of packed beaches and trains heading to coastal resort towns a day earlier and throngs of jubilant fans celebrating Liverpool’s first English soccer league title in 30 years.

Hancock told TalkRadio that he was “reluctant” to close public spaces as “people have had a pretty tough lockdown.” However, he said “we will take action” if there is a spike in the number of coronavirus cases.

Italy, one of the hardest hit European nations, battled to control an outbreak among Bulgarian seasonal crop pickers near Naples.

The governor of southern Campania region insisted that the workers who live in an apartment complex with dozens of COVID-19 cases must stay inside for just over two weeks, not even emerging for food — authorities will deliver groceries to them. The complex must be kept in “rigorous isolation,” Gov. Vincenzo De Luca said. That means that for 15 days, “nobody leaves and nobody enters” the apartments, where some 50 cases have been confirmed among about 700 residents.

Sweden’s chief epidemiologist, Anders Tegnell, lashed out at the World Health Organization today, calling it “a total mistake” to put his nation on a list of countries where “accelerated transmission” could overwhelm health systems. “This is unfortunately a total misjudgment of the Swedish data,” Tegnell told Swedish radio.

A report by the WHO’s Europe office on Thursday named 11 countries, including Sweden, Armenia, Albania, Kazakhstan and Ukraine. Sweden has seen a steep rise in the number of COVID-19 cases but this has been attributed to an increase in testing.

In China, where the pandemic originated in December, authorities have mobilized resources for mass testing and locked down parts of Beijing this month due to an outbreak that has infected 260 people. The 11 new cases reported in the capital today continued a downward trend that suggests transmissions have been largely brought under control.

The United States, which counts the most infections in the world, is seeing daily jumps in COVID-19 cases nearing the peak reached in late April.

Arizona’s 3,056 additional infections reported Thursday was the fourth day in a week with a increase over 3,000. Transmissions have spiked following Republican Gov. Doug Ducey’s decision to lift stay-home restrictions in May.

The numbers “continue to go in the wrong direction,” said Ducey, who confirmed that the state has postponed further efforts to reopen.

He pushed back against reporters’ questions about his position on the use of masks and his attendance at President Donald Trump’s indoor campaign event this week at a Phoenix church. Many of the 3,000 people who attended did not wear face coverings.

Deaths tolls have dropped even as the number of infections have increased, possibly reflecting better medical treatments and better efforts to prevent infections among the most vulnerable, like nursing home residents. A rising proportion of cases in the U.S. is among younger people, who are more likely than their elders to survive a bout with COVID-19.

“This is still serious,” said Dr. Robert Redfield, director of the Centers for Disease Control and Prevention, but “we’re in a different situation today than we were in March or April.”

India, which has the world’s second-largest population, has seen regular record daily increases. The 24-hour spike of 17,296 new infections reported today raised the confirmed national caseload past 490,000, including 15,301 fatalities.

In India and in neighboring Pakistan, government leaders have resisted new restrictions, citing concerns they could further hurt their struggling economies. Even so, Indian Railways delayed the resumption of regular train services by more than a month, until Aug. 12.

A comeback of the virus is also erasing hard-won gains in South Korea, which reported 39 newly confirmed cases today, mostly from the densely populated capital area that had escaped the worst of the country’s outbreak in February and March. There’s criticism that authorities, concerned about a fragile economy, were too quick to ease social distancing guidelines and reopen schools starting in May.

Australia today reported 37 new cases of the coronavirus, including 30 in Victoria state, where health authorities are scrambling to contain an outbreak. Authorities said they tested 20,000 people in Melbourne suburbs as they went door-to-door in their attempts to stamp out the virus.

One of Germany’s biggest meat processing companies, Westfleisch, said today it plans daily tests on all 5,000 workers involved in the production process amid concerns about a series of outbreaks at slaughterhouses. Rival firm Toennies Group is at the center of an outbreak in the nearby region of Guetersloh that has led to a partial lockdown as authorities try to prevent the spread of the virus to the wider community.

On the record – Howland