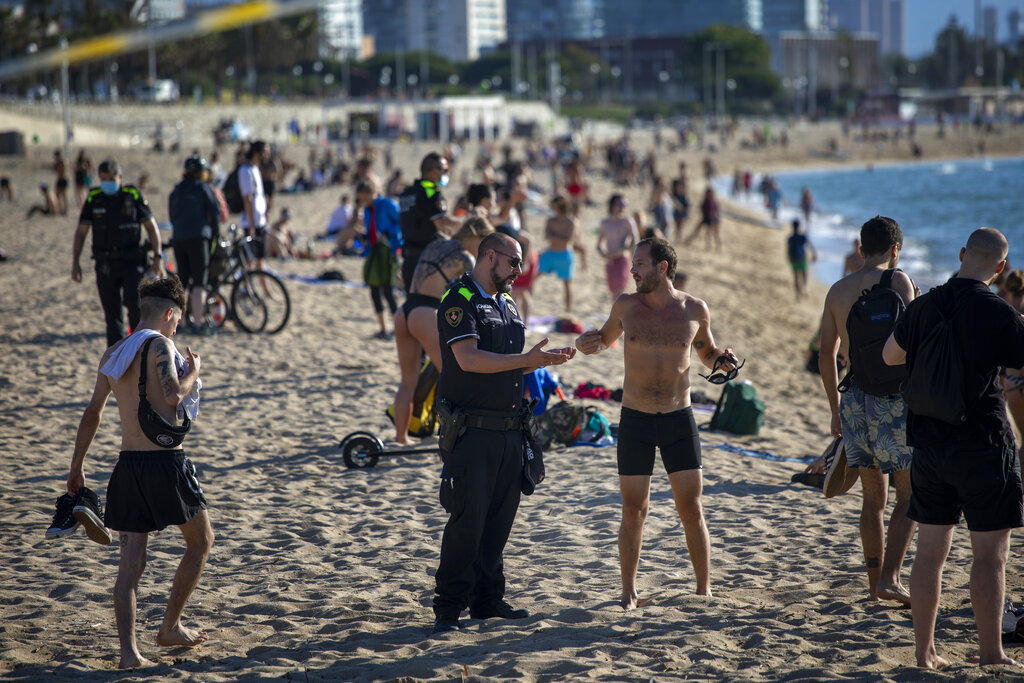 Police officers ask people to not sit while patrolling the beach today in Barcelona, Spain. Roughly half of the population, including residents in the biggest cities of Madrid and Barcelona, are entering phase 1, which allows social gatherings in limited numbers, restaurant and bar service with outdoor sitting and some cultural and sports activities. (AP Photo/Emilio Morenatti)

SEOUL, South Korea (AP) — As Mediterranean beaches and Las Vegas casinos lay out plans to welcome tourists again, South Korea today announced a spike in new infections and considered reimposing social distancing restrictions, revealing the setbacks ahead for others on the road to reopening.

The European Union was unveiling a massive stimulus package for the bloc’s ailing economies later today, as European nations scrambled to emulate South Korea’s widely praised strategy of tracing, testing and treating that tamed its outbreak and made it a model for the world.

Across the Atlantic, the pandemic was claiming new victims as the confirmed U.S. death toll approached 100,000 — the highest by far in the world — and nations from Mexico to Chile to Brazil struggled with surging cases and overwhelmed hospitals.

All but four of the new cases were in the densely populated Seoul region, where officials are scrambling to stop transmissions linked to nightclubs, karaoke rooms and a massive e-commerce warehouse. All were reopened last month when social distancing measures were relaxed.

“We will do our best to trace contacts and implement preventive measures, but there’s a limit to such efforts,” said Jeong Eun-kyeong, director of South Korea’s Centers for Disease Control and Prevention.

“Young people have a very broad range of activity, so at the point of diagnosis, there’s already a lot of exposure … the number of people or locations we have to trace are increasing geometrically,” he added.

Seoul and nearby cities had restored some control in recent weeks by reclosing thousands of bars, karaoke rooms and other entertainment venues to slow the spread of the virus.

Britain, which has recorded more deaths than any other European country — over 37,000 — was announcing details of its own “test and trace” plans, which will send 25,000 workers to find the contacts of anyone who tests positive for the virus. Germany said it would extend pandemic-related restrictions on interpersonal contact until June 29 as it cautiously lifts lockdown measures.

As many countries in Asia and Europe make progress in containing the pandemic, reversing its devastating economic fallout becomes a top priority.

The 27-nation EU was unveiling a massive coronavirus recovery plan worth hundreds of billions of euros to help countries rebuild. But the bloc remains deeply divided over what strings should be attached to the funds, with frugal members such as Austria, Denmark, the Netherlands and Sweden pushing for loans rather than grants to form the backbone of the package.

Cyprus announced today that tourists would be welcomed back on June 9. To make them feel safe, Cyprus said would cover all costs — lodging, food, drink and medication — for anyone testing positive for the coronavirus and their family members while on vacation in the east Mediterranean island nation.

But welcoming tourists was far from the concerns of other nations.

India saw another record single-day jump, reporting 6,387 new cases today as the government prepared new guidelines for the next phase of a 2-month-old national lockdown that ends Sunday.

A U.S. travel ban took effect for foreigners coming from Brazil, where President Jair Bolsonaro has raged against state and local leaders who are enforcing stay-at-home measures. Brazil has about 375,000 coronavirus infections — second only to the 1.6 million cases in the U.S. — and has counted over 23,000 deaths, but many fear its true toll is much higher.

Worldwide, the virus has infected nearly 5.6 million people and killed over 350,000, including about 170,000 in Europe, according to a tally by Johns Hopkins University that health experts say does not show the entire scope of the pandemic.

Flags were flying at half-mast today on more than 14,000 public buildings in Spain as it held the first of 10 days of national mourning for coronavirus victims.

In the U.S., President Donald Trump several months ago likened the coronavirus to the flu and dismissed worries that it could lead to so many deaths. The administration’s leading scientists have since warned that as many as 240,000 Americans could die in the country’s outbreak.

The White House said the president was committed to holding a Fourth of July celebration in the nation’s capital even as local officials warned that the region — one of the hardest hit by the coronavirus — will not be ready to hold a major event so soon.

U.S. officials are pushing hard to reopen even as more than a dozen states are still seeing increasing new cases.

Nevada Gov. Steve Sisolak announced Tuesday night that casinos can reopen after a 10-week shutdown on June 4, welcoming tourists to the gambling mecca of Las Vegas. Sisolak had planned to make the announcement at a news conference but scrapped the live event after he learned he was potentially exposed to the virus at a workplace visit.

Around the globe, eagerness to get life back to normal is offset by nervousness about what might come next.

Greece, which has seen only 173 coronavirus deaths, will let international tourists return to its sun-dappled islands beginning June 15.

While many island residents depend on tourism for their livelihoods, they have also taken comfort in their isolation during the pandemic and worry about opening up to outsiders.

“So far things have gone well,” said Katerina Vikeli on the island of Milos. “Now with the people who will come, what will happen?”

In New Zealand, which is still banning foreign arrivals, the Ministry of Health said there were no COVID-19 patients in the country’s hospitals. The nation took aggressive, early action to stop transmissions and has reported only 21 deaths.