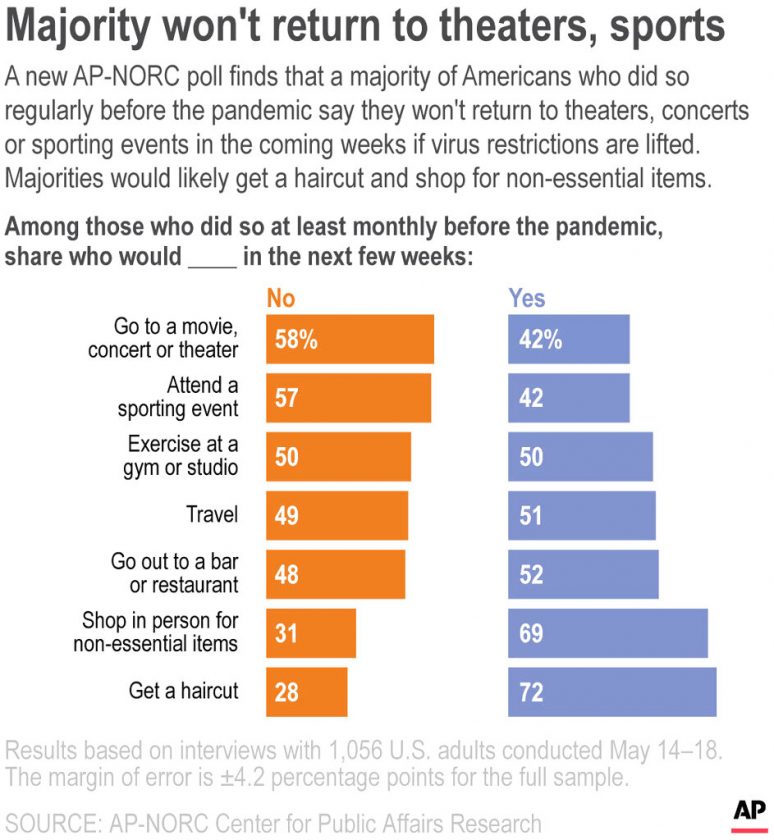 A new AP-NORC poll finds that a majority of Americans who did so regularly before the pandemic say they won't return to theaters, concerts or sporting events in the coming weeks if virus restrictions are lifted. Majorities would likely get a haircut and shop for non-essential items.

WASHINGTON (AP) — Much of the country remains unlikely to venture out to bars, restaurants, theaters or gyms anytime soon, despite state and local officials across the country increasingly allowing businesses to reopen, according to a new survey by The Associated Press-NORC Center for Public Affairs Research.

That hesitancy in the wake of the coronavirus outbreak could muffle any recovery from what has been the sharpest and swiftest economic downturn in U.S. history. Just 42 percent of those who went to concerts, movies, theaters or sporting events at least monthly before the outbreak say they’d do so in the next few weeks if they could. Only about half of those who regularly went to restaurants, exercised at the gym or traveled would feel comfortable doing so again.

About a quarter of Americans say someone in their household has lost a job amid that downturn, and about half have lost household income, including layoffs, pay cuts, cut hours or unpaid time off. The majority of those whose household suffered a layoff still believe they will return to their previous employer, but the share expecting their job will not return has risen slightly over the past month, to 30 percent from 20 percent.

Amber Van Den Berge, a teacher in Indiana, held off on immediately returning to her second job as a fitness instructor. She would need to pass a test for COVID-19, get her temperature checked each morning and lead class while wearing a protective mask.

“Wear a mask to teach a fitness class? I’m not ready for that,” said Van Den Berge, 39.

The speed and strength of any economic rebound could be thwarted because many fear the risk of new infections. Consumers make up roughly 70 percent of U.S. economic activity, so anything less than a total recovery in spending would force many companies to permanently close and deepen the financial pain for 39 million people who have lost jobs in the past two months.

Forty-nine percent of Americans approve of how President Donald Trump is handling the economy, the poll shows. That has slipped over the last two months, from 56 percent in March. Still, the issue remains a relative positive for Trump, whose overall approval rating stands at 41 percent.

Trump has at times downplayed the threat of the coronavirus and the benefits of testing and has criticized the leadership of Democratic governors. Meanwhile, many Democratic lawmakers have insisted on the importance of containing the disease and sustaining the economy with federal aid.

Greg Yost, a Republican from Rockaway, New Jersey, says he wishes the president would defer more to medical experts, rather than speak off the cuff. But he added that he thinks Trump believes he must defend himself against personal attacks.

“He’s between a rock and a hard place,” Yost said.

But ShyJuan Clemons, 45, of Merrillville, Indiana, says Trump has made the fallout from the pandemic worse by initially denying its dangers and failing to display much empathy for those hurt by the coronavirus.

“Even my cat knows that he’s terrible,” said Clemons, referring to his 14-year-old Siamese mix, Shinji.

Clemons works with special needs people and worries about his hours if Indiana — starved of tax revenues because of the disease — cuts its budget.

But it also shows how an atmosphere of political polarization may be feeding both an eagerness by some to return and a reluctance by others to resume their previous lifestyles.

Among those who did so at least monthly before the outbreak, Republicans are far more likely than Democrats to say they’d go to restaurants (69 percent to 37 percent), movies, concerts or theaters (68 percent to 28 percent), travel (65 percent to 38 percent) and go to a gym or fitness studio (61 percent to 44 percent).

Sixty-nine percent of those who regularly shopped in person for nonessential items before the outbreak, including majorities among both parties, say they’d be likely to wander malls and stores again. But Republicans are more likely to say so than Democrats, 82 percent to 61 percent.

Yost expressed no qualms about going out because he believes the economic damage from shelter-in-place orders will be worse than the deaths from the disease.

“What’s going to happen with depression, homelessness — a lot of other problems are going to arise because we shut down the economy?” said Yost, a vice president of operations at an insurance agency. “I would go to a restaurant and feel comfortable with my kids and not even have masks on.”

Still, there’s an exception to the partisan divide, with 76 percent of Republicans and 69 percent of Democrats who get haircuts on at least a monthly basis saying they’d do that in the next few weeks if they could.

The poll finds an overwhelming majority of Americans, 70 percent, describe the economy as poor, but their outlook for the future is highly partisan. Sixty-two percent of Republicans expect improvement in the coming year, while 56 percent of Democrats say it will worsen.

At the same time, two-thirds of Americans say their personal finances are good, which has remained steady since before the outbreak began.

Many families have been able to survive the downturn because of aid such as direct payments to taxpayers and expanded unemployment benefits that will expire in July.

Mitchell Durst, 74, has watched the job losses from the sidelines as a retired mathematician in Keyser, West Virginia.

He was already cautious about going out because of a compromised immune system from cancer treatments. The disease stopped his weekly poker game. He lived through the polio crisis, dealt with gas rationing during the 1970s and worked in Nigeria during the Ebola scare.

He calculates the United States will need to be patient about an economic comeback.

“Until we have a vaccine, particularly for those folks at risk, it’s going to be awhile,” Durst said. “If we get something in two years, if we’re so fortunate to be able to do that, I think that would be fantastic.”