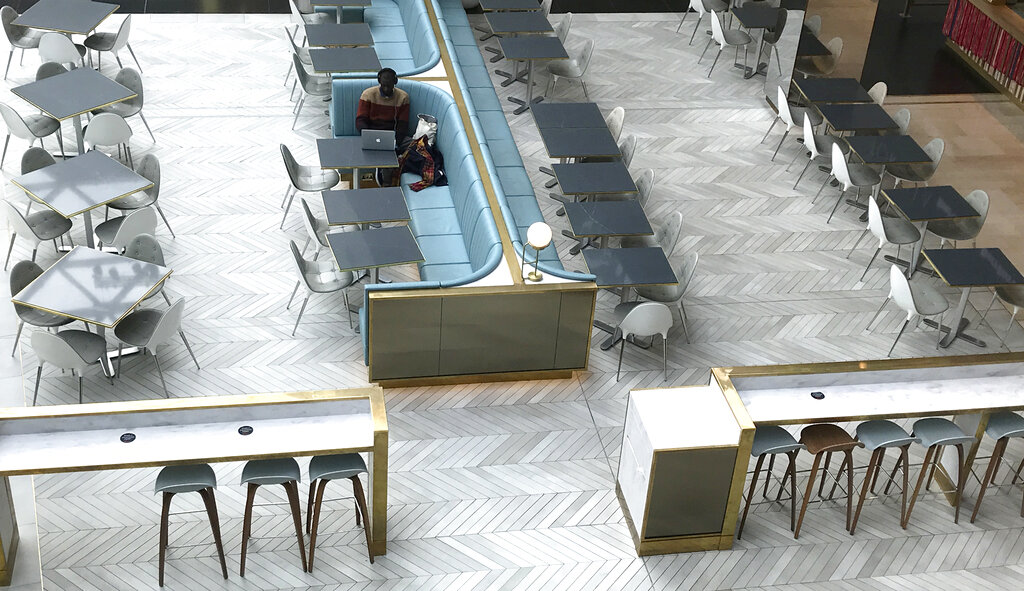 A man sits alone at a coffee shop area at a shopping center today in London. For most people, the new coronavirus causes only mild or moderate symptoms, such as fever and cough. For some, especially older adults and people with existing health problems, it can cause more severe illness, including pneumonia. (AP Photo/Kirsty Wigglesworth)

Governments and central banks are scrambling to find ways to keep businesses from going bankrupt as the virus outbreak grinds the world economy to a halt.

A day after Wall Street endured its worst daily drop since the crash of 1987, European markets wavered, as did U.S futures markets. There is tremendous volatility, with the extent of economic damage from the pandemic still anyone’s guess. Factories are closed, retail stores are closed, travel has ground almost to a halt and billions of people are sheltering at home, going outside only to find essential supplies.

Here is a look at how the outbreak is reshaping the global economy and how individuals, businesses and governments are responding.

GOVERNMENT AND CENTRAL BANKS: In its latest emergency action, the Federal Reserve is establishing a lending facility to buy short-term loans from banks and companies to ease the flow of credit as the economy grinds to a halt from the viral outbreak. The Fed announced this morning that it’s reviving a program it first used during the 2008 financial crisis to unclog a short-term lending market for what is known as “commercial paper.” Large businesses issue commercial paper to raise cash to meet payrolls and cover other short-term costs. Borrowing rates in the commercial paper market have been spiking as more companies have sought to raise cash in the expectation that their revenue will plunge.

The White House is proposing a roughly $850 billion emergency economic rescue package for businesses and taxpayers. Treasury Secretary Steven Mnuchin will outline the package to Senate Republicans at a private lunch, with officials aiming to have Congress approve it this week. It provide relief for small businesses and the airline industry and include a massive tax cut for wage-earners. Two people familiar with the request described it to The Associated Press on the condition of anonymity because they weren’t authorized to speak publicly.

France’s government pledged 45 billion euros ($50 billion) in aid for small businesses. That’s in addition to tens of billions already promised for French workers forced to stop working because of store and restaurant closures and strict new confinement measures. French Finance Minister Bruno Le Maire announced the new aid will include tax breaks and a “solidarity fund” for struggling small businesses. “This epidemic will be a catastrophe for all countries of the world,” he said. “The shock will be violent.”

Where to begin is an enormously complex question. Big industry and small business are looking at a complete, or nearly complete halt to operations. Restaurants that have been shuttered employ hundreds of thousands of people. Airlines are grounding flights, meaning no crews are needed. The dilemma afflicts every sector of the national and global economy. The risk of frozen economic activity will ripple outward, from the banking and mortgage industry, to services ranging from dog walking to doctors visits.

New Zealand vowed today to spend billions of dollars supporting distressed companies with its economy headed for recession. The stimulus package is equivalent to 4 percent of GDP. A large chunk of the new spending will go to businesses that have lost more than 30 percent of their income as a result of the downturn. Other money will go toward health costs, income support, and the airline industry.

BIG TECH: The biggest tech companies in the world are banding together to combat misinformation about the pandemic and also fraud. Facebook, Google, Microsoft, Twitter, Linkedin, Reddit and YouTube said in a joint statement that they will also attempt to disseminate across their platforms essential updates from government health organizations. Misinformation and confusion in social media posts have been problematic for years. The spread of the coronavirus has exacerbated the problems for which Facebook and others were lambasted during the 2016 U.S. presidential election.

HEAVY INDUSTRY: Volkswagen said it will close most of its European plants for two weeks due to uncertainty about demand for cars and supplies of parts. Chief Financial Officer Frank Witter said this morning that uncertainty about the severity and duration of the virus outbreak made it impossible to give a reliable outlook for sales.

Airbus will suspend production at its French and Spanish facilities for the next four days to implement tougher health and safety protocols, including more rigorous sanitation and enforced distancing between workers.

Canada’s second largest airline is suspending all commercial international and transborder flights for a 30-day period as it helps operate rescue and repatriation flights in partnership with the Canadian government. Westjet says it will suspend normal service on Sunday, March 22. Prime Minister Justin Trudeau says now is the time for Canadians to come home. The government has mandated the screening of passengers by airlines before boarding.

Hong Kong’s Cathay Pacific Airways cut its flight schedule by 90 percent in April after passenger traffic in February fell by more than half from a year ago. Hong Kong’s airlines were already under pressure because of political unrest which has hurt tourism.

American Airlines on Monday suspended about 75 percent of its long-haul international flights and began grounding about 135 planes. It will cut passenger-carrying capacity in the U.S. by 20 percent in April and 30 percent in May. Airlines are talking to unions about taking cuts in pay or hours, and some are cutting executive and management salaries.

MARKETS: U.S. stocks jittered higher at the start of trading this morning, a day after plunging to their worst loss in more than three decades, as uncertainty about how badly the coronavirus will hit the economy continues to dominate markets.

Trading is unsettled around the world beyond the S&P 500, where an initial gain of 3.2 percent trimmed to 1 percent within 10 minutes. European stocks swung from gains to losses. South Korean stocks fell to their fifth straight loss of 2.5 percent, but Japanese stocks shook off an early loss to edge higher.

The 12 percent plunge on the S&P 500 Monday took place amid a growing consensus, from Wall Street to the White House, that a global recession may be imminent. Entire sectors of national economies are at risk. The Philippine stock market shut down today after the government imposed restrictions on movement in the capital.

The investor-oriented ZEW index of German business confidence recorded its sharpest decline ever as Europe’s economy faces an almost certain recession whose depth could exceed the one that followed the global financial crisis. The index fell to minus 49.5 points in March from plus 8.7 points in February, a fall of 58.2 points and the biggest drop since the survey began in 1991, the institute said today. Germany and other countries are restricting entry at the border and ordering many businesses to close, leading to a massive drop in sales and activity across Europe.

STORES, RESTAURANTS AND OTHER PUBLIC PLACES: The closure list of retailers, national fast food chains or any place where people once congregated continued to grow today. McDonald’s and Wendy’s say the dining areas of all North American restaurants are closing. Takeout or delivery is still available at most locations, though some chains have declared out an outright shutdown in areas where clusters of coronavirus have emerged, including Starbucks. McDonald’s said in a regulatory filing today that dining areas in France are closed. In Spain and Italy, both hard hit by COVID-19, all restaurants have locked their doors. The Chicago fast food giant said 95 percent of its 3,300 restaurants in China are now open.

Ralph Lauren and Foot Locker announced nationwide closures of stores in regulatory filings. They follow Patagonia, Under Armour, Urban Outfitters, REI and others in doing so.

With so many people stocking, and overstocking pantries, Dollar Tree temporarily suspended online ordering to ensure the shelves in its stores are loaded. Like Amazon, Target and Walmart, Dollar Tree has experienced a sharp spike in online orders as consumers scramble to secure staples while avoiding public places. Dollar Tree said most of the items on its website are still available in stores.

With hopes of a rescue fading in a pandemic, the London fashion and furniture retailer Laura Ashley said today that it will appoint administrators to devise its direction going forward. The company’s main shareholder MUI Asia said it will not be able to step in with the money that is needed. The company, which was an iconic presence on the U.K. high street during the 1980s, said in a prepared statement that the outbreak has had “an immediate and significant impact,” and that “ongoing developments indicate that this will be a sustained national situation.”

U.S. movie theaters have closed nationwide, turning dark nearly all of the country’s 40,000-plus screens in an unprecedented shutdown. The largest chains had tried to remain open even as Hollywood postponed upcoming releases, including the new James Bond film. But after President Donald Trump on Monday urged against gatherings of more than 10 people, AMC Theaters, the nation’s largest chain, said today its theaters would close.

DOWNWARD SLOPE: Vail Resorts will close all slopes for the remainder of the ski season. The company announced Saturday that it would shut down its 34 resorts for at least one week. The company said today, however, that it will consider reopening Breckenridge Ski Resort in Colorado, Heavenly Mountain in Lake Tahoe in California and Whistler Blackcomb in British Columbia, Canada. 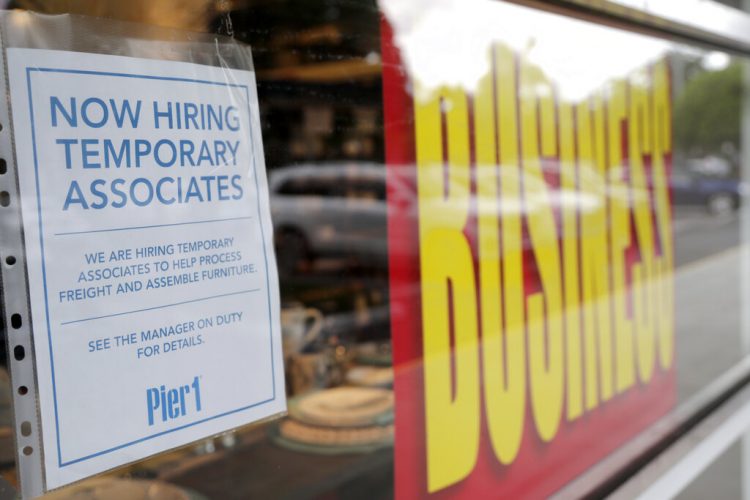 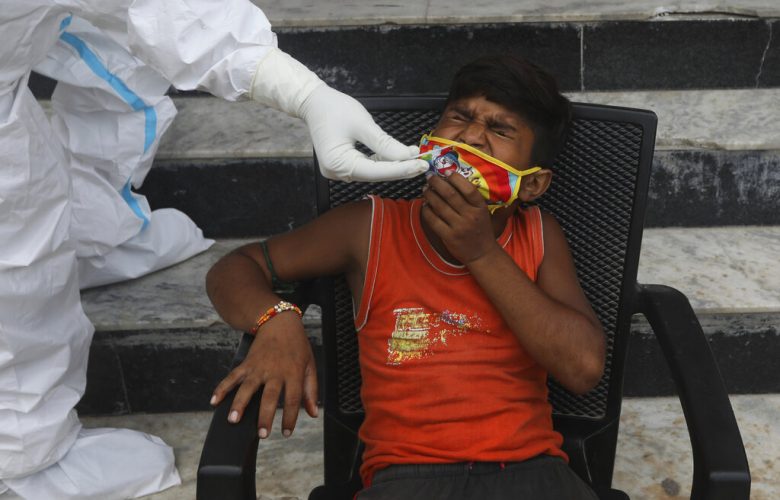 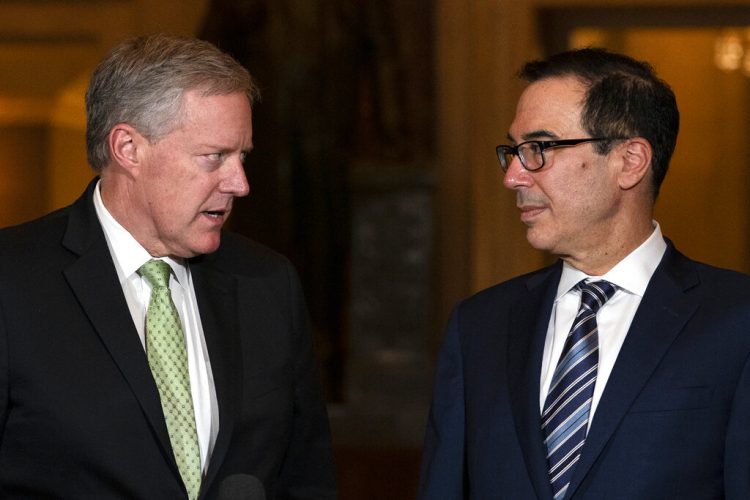 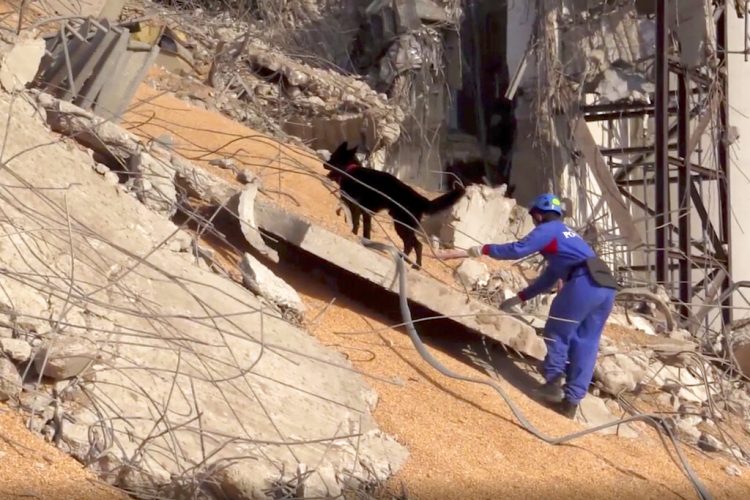 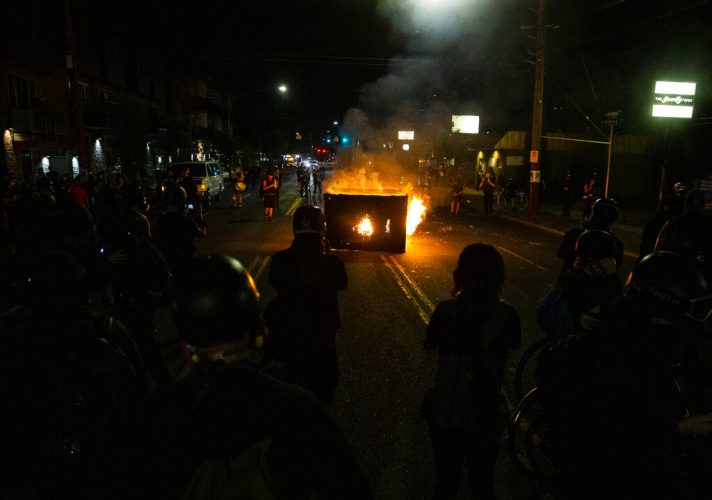