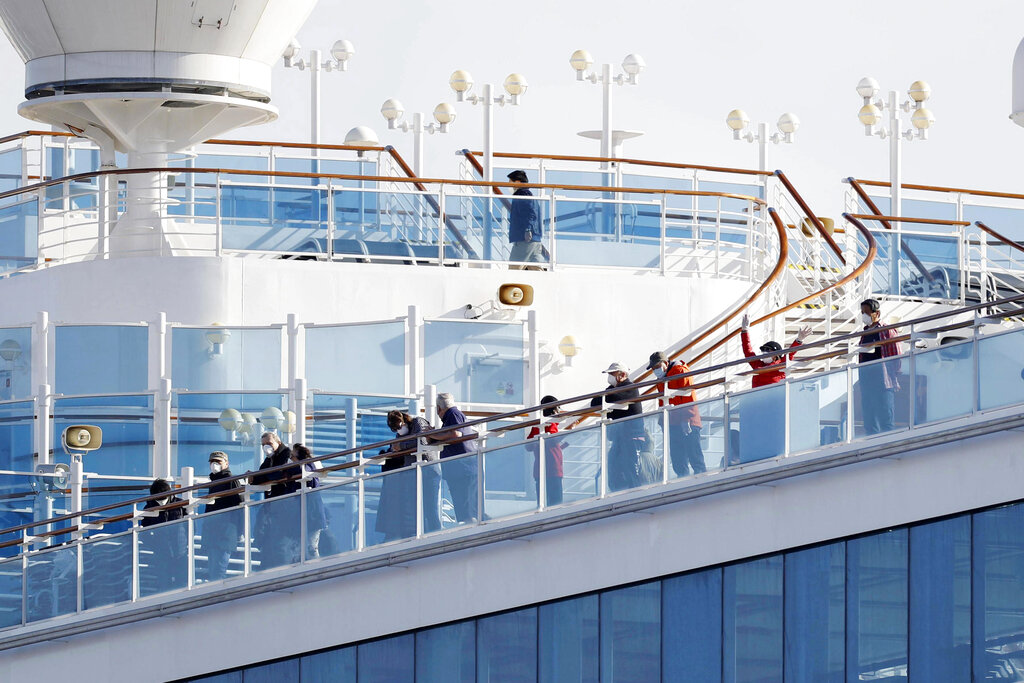 Passengers stand on the deck of the Diamond Princess cruise ship anchored at Yokohama Port in Yokohama, near Tokyo, today. Japan’s health ministry said today that 39 new cases of a virus have been confirmed on the cruise ship quarantined at the Japanese port. (Yuta Omori/Kyodo News via AP)

BEIJING (AP) — The number of new cases in China dropped for a second straight day in a virus outbreak that has infected about 45,000 people and killed more than 1,100, health officials said today.

The outbreak has become the latest political challenge for China’s ruling Communist Party and its leader, Xi Jinping.

While most of the infections have been in China, it has gradually rippled overseas. In Japan, 39 new cases were confirmed on a cruise ship quarantined at Yokohama, bringing the total to 174 on the Diamond Princess.

China is struggling to restart its economy after the annual Lunar New Year holiday was extended to try to curb the spread of the virus. Traffic remained light in Beijing and many people were still working at home.

The latest developments in the outbreak, which started in December in the city of Wuhan:

The number of new cases has trended down in the past week, raising hopes that the epidemic may be peaking.

The National Health Commission said 2,015 new cases had been tallied on Tuesday, the second straight daily decline and down from nearly 3,900 a week ago. Commission spokesman Mi Feng said the situation is still grim but “we have seen some positive changes.”

Leading Chinese epidemiologist Zhong Nanshan told doctors in Wuhan that while the rest of China may have turned the corner, more efforts are still needed to stop the spread of the virus in the city and the rest of Hubei province, the hardest-hit area.

The total number of cases in mainland China reached 44,653 and the death toll hit 1,113. Two people have died elsewhere, one in Hong Kong and one in the Philippines.

DBS told 300 employees to work from home after it learned that an employee had been infected by the virus. The Singapore bank said all staff on the same floor should do so as a precautionary measure. The city-state has 50 confirmed cases.

In China, state media said a large cluster of cases in a district of Tianjin, a port city southeast of Beijing, has been traced to a department store. One third of Tianjin’s 104 confirmed cases are in Baodi district, where the store is located, the Xinhua News Agency reported.

A salesperson in the store’s home appliance section was the first diagnosed on Jan. 31, Xinhua said, and a series of cases followed. None of the infected had visited Wuhan recently, and with the exception of one married couple, they worked in different sections of the store and did not know one another.

Two Russian women who were kept in isolation for possible inflection by the virus say they fled from their hospitals this month because of uncooperative doctors, poor conditions and fear they would become infected.

Both women said their hospital ordeals began after returning from Hainan, a tropical island in southern China popular with Russian tourists.

Many of those quarantined in Russian hospitals have complained about conditions in the isolation rooms and lack of cooperation from doctors who are uncertain about quarantine protocols.

A Chinese drug manufacturer announced it has begun producing a drug developed by U.S. company Gilead Sciences Ltd. for possible use against the new virus.

BrightGene Bio-Medical Technology Co. said in a statement issued through the Shanghai Stock Exchange that it had successfully synthesized the active ingredients in remdesivir.

A government laboratory said last week it was applying for a patent on the drug for treatment of the virus.

Gilead said earlier it was working with U.S. and Chinese authorities to test remdesivir as a treatment for the virus. Xinhua reported last week that clinical trials were starting.