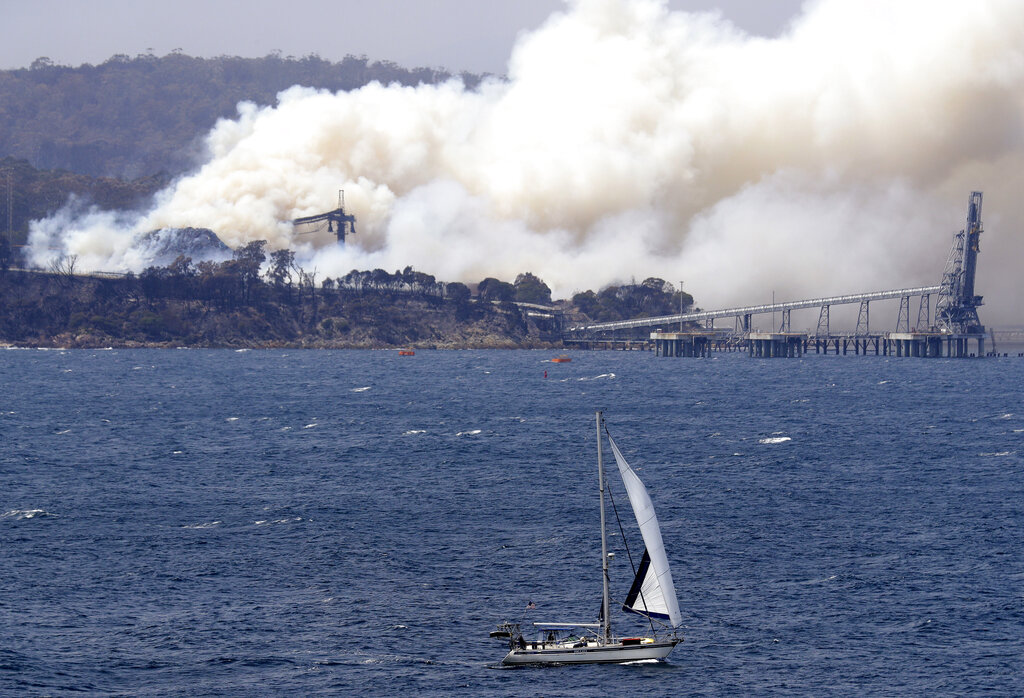 A yacht sails past a burning woodchip mill today as the wildfires hits the town of Eden, New South Wales, Australia. The wildfires have destroyed more than 2,000 homes and continue to burn, threatening to flare up again as temperatures rise. (AP Photo/Rick Rycroft)

The danger is centered on New South Wales and Victoria, Australia’s most populous states, where temperatures and winds spiked after a few days of relatively benign conditions.

Firefighters were working into the night to keep the fires from reaching communities as fierce winds whipped the blazes in multiple directions.

The New South Wales Rural Fire Service had warned that coastal towns south of Sydney including Eden, Batemans Bay and Nowra could again be under threat weeks after losing homes to the fires. By this evening Australian time, the wildfires burning in that region were holding within containment lines, but winds could cause them to flare anew, Rural Fire Service Commissioner Shane Fitzsimmons told reporters.

New South Wales Premier Gladys Berejiklian said the extent of any damage from the fires wouldn’t be known until Saturday morning.

“We know it’s going to be a long and difficult night,” Berejiklian said.

In neighboring Victoria, evacuation orders were issued in alpine areas, and Premier Daniel Andrews pleaded with residents to heed alerts and avoid complacency even though no fresh destruction was being reported.

“Despite this unprecedented fire activity, we have nobody who is unaccounted for, we have no further people who have died, and we have no further communities who have been cut off,” Andrews told reporters. “Now, all of those things can change and that is perhaps the most powerful reminder that we have to remain vigilant.”

The unprecedented fire crisis in southeast Australia has claimed at least 26 lives, destroyed more than 2,000 homes and scorched an area twice the size of the U.S. state of Maryland since September.

Prime Minister Scott Morrison said today that the military was on standby to help firefighters and emergency agencies.

The military has already been involved in the unfolding crisis by clearing roads closed by fallen trees, burying dead cattle and sheep and providing fodder to surviving livestock.

Fire crews throughout the region were bracing for a long, rocky night. In the southeastern New South Wales town of Candelo, Nathan Barnden, a divisional commander with the Rural Fire Service, was preparing to head to the nearby township of Burragate with his team to protect the community from a fire that was marching north.

The fire had breached containment lines in one area, and officials were worried that predicted winds of 60 to 100 kilometers per hour (40 to 60 miles per hour) could push it into populated areas.

“We’ll be there to help defend them through the night,” Barnden said. “We’ve been warned that we could be up there ’til the morning. … There is a risk that we’ll be cut off and we’ll have to stay there throughout the time.”

In the small village of Towamba in southern New South Wales, most residents had evacuated by today, after firefighters warned them they should get out, said John Nightingale, a volunteer firefighter with the Rural Fire Service.

Last week, some houses in the village were destroyed by a fire that turned the afternoon sky first a deep magenta and then pitch black, Nightingale said.

“Late at night, you could hear the rumbling of the fire,” he said. “It was very terrifying.”

Officials feared the wind shift late today could blow the flames in a new direction.

Nightingale said he and the other firefighters would work to snuff out any spot fires that flare up to try and keep them from spreading. But if conditions became too dangerous, they would need to take shelter at a community hall, a solid structure with about 25,000 liters (6,600 gallons) of water attached to it. Alongside the hall is a cleared, grassy area away from trees and shrubs where people can retreat as a last resort.

“The grass on the oval is very short so there’s nothing to carry a strong fire,” he said. “So that’s a survival option, basically. A patch of grass. And if that happened, we’d have trucks and sprinklers going and hoses going, wetting people down. But I would hate it to come to that. Anything but that.”

The wildfire disaster has focused many Australians on how the nation adapts to climate change. Morrison has come under criticism for downplaying the need for his government to address climate change, which experts say helps supercharge the blazes. Today, thousands of protesters gathered in cities across Australia to call for action on climate change and demand that Morrison be ousted.

Morrison said Thursday that a government inquiry into the fires would examine the role of climate change.

Asked today whether he expected fire emergencies of the same magnitude to become more common in the future with climate change, Morrison did not give a direct answer.

“There’ll be the reviews that take place as you’d expect and I’ve indicated in response to questions that we’ll be working closely with state and territory authorities on how they’re undertaken,” Morrison told reporters. “The links and implications here have been acknowledged.”

Morrison brushed off criticism over what many Australians perceive as a slow, detached response to the wildfire crisis.

“What we’ve got here is the single largest federal response to a bushfire disaster nationally that the country has ever seen,” Morrison said. “The government’s responding to an unprecedented crisis with an unprecedented level of support.”

The conservation group WWF-Australia estimates that 1.25 billion wild animals had died during the fires in addition to livestock losses, which the government expects will exceed 100,000 animals.

WWF fears the disasters could lead to local extinctions and threaten the survival of some species, such as the glossy black-cockatoo and a knee-high kangaroo known as the long-footed potoroo.

WWF conservation scientist Stuart Blanch described the estimate as conservative, and it did not include bats, frogs and insects.

The majority of estimated losses were reptiles, followed by birds, then mammals such as koalas, kangaroos, wallabies, echidnas and wombats.

WWF estimates there were between 100,000 and 200,000 koalas across Australia before the fire season. Estimated koala losses in the current emergency include 25,000 on Kangaroo Island off southern Australia and 8,000 in northwest New South Wales.

“It’s a significant loss, but I don’t think we’ll know for several months,” Blanch said of the koala deaths. 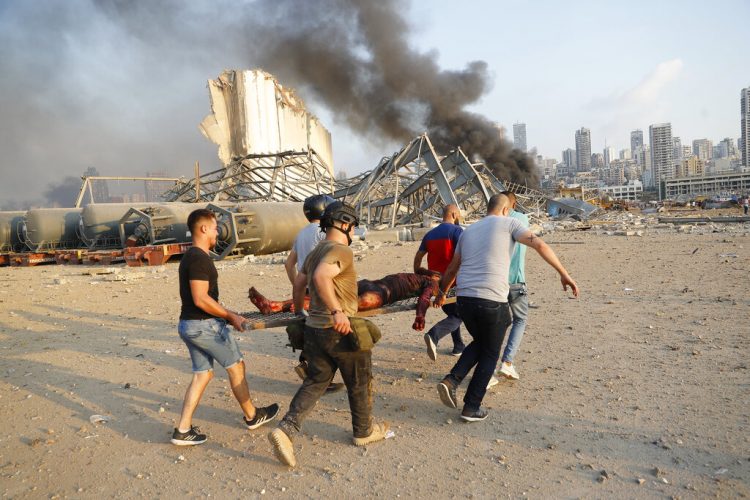 Children returning to school will be required, with some exceptions, to wear face masks, Gov. Mike DeWine said ...

WARREN -- The Ohio Attorney General's Bureau of Criminal Investigations was asked by the Warren Police Department ...