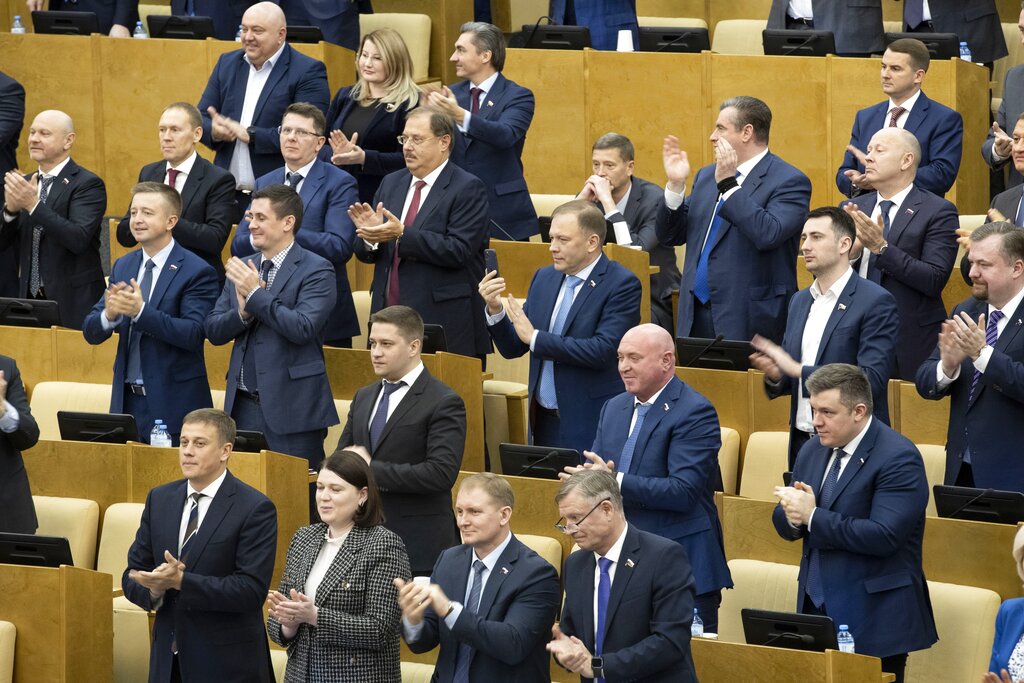 Russian lawmakers applaud after voting for Russian constitutional amendments today during a session at the Russian State Duma, the Lower House of the Russian Parliament in Moscow, Russia. The Kremlin-controlled lower house of parliament, the State Duma, unanimously voted for constitutional amendments widely seen as President Vladimir Putin's strategy to stay in power well past the end of his term in 2024. (AP Photo/Alexander Zemlianichenko)

MOSCOW (AP) — Russian lawmakers today quickly gave preliminary approval to a slew of constitutional changes widely seen as an attempt by President Vladimir Putin to remain in charge after his current term ends in 2024.

Kremlin critics have described the amendments as an attempt by Putin to secure his rule over Russia for life, but still it remains unclear how exactly the changes allow him to do that.

Putin also didn’t explain why he hastily moved to amend the constitution now, four years before the end of his term. That drew suggestions it could herald a plan to call an early parliamentary or presidential election.

Putin’s amendments give parliament the right to appoint Cabinet members, but they are focused primarily at preserving and even strengthening the powers of the presidency.

The Kremlin-controlled lower house of parliament, the State Duma, rubber-stamped the amendments Today by a unanimous vote in the first of three required readings.

Putin, a 67-year-old former KGB officer, who has led Russia for more than 20 years — the longest since the Soviet leader Joseph Stalin, likes to keep his plans secret until the last moment.

When the Russian leader announced his proposals last week, many observers speculated he may use them to shift into the post of prime minister — something he did previously when he stepped down after two terms in 2008 and let his protege, Dmitry Medvedev, serve as placeholder president for four years before reclaiming the job.

Putin continued to wield power during Medvedev’s presidency, but he wasn’t happy with what was dubbed“the tandem rule.” It’s clear he would not take the premier’s position again without turning it into the top executive job. The proposed amendments leave the prime minister subordinate to the president, who can fire him at his whim.

Putin’s suggestion that the constitution must enshrine the role of the State Council, an advisory body of regional governors and top federal officials, led some analysts to predict that he could aim to stay at the helm as its head. But Putin’s amendments say the president will have the power to form the Council.

Some have suggested that Putin, who served two consecutive terms in 2000-2008 and is currently serving the second of another pair of consecutive terms, may use the constitutional changes to reset the term clock.

Most observers agree, however, that such a move would be too blunt for Putin, a law faculty graduate who prefers to have a democratic veneer on his political machinations.

As wild speculation about Putin’s intentions has continued to swirl, he remains poker-faced.

Asked at Wednesday’s meeting with students if Russia could follow the example of Kazakhstan, where a longtime president stepped down last year but continued to call the shots by assuming another prominent position, Putin shrugged off the idea as unworkable.

“The emergence of a position above the presidency would mean a dual power, which is absolutely unacceptable for a country like Russia,” Putin said.

The second reading of the constitutional bill is scheduled for Feb. 11. Lawmakers and the working group created by Putin have already come up with a variety of proposals in addition to what the draft law outlines.

Putin said the constitutional changes need to be approved by the entire nation, but it remains unclear how such a vote would be organized.

Russian opposition figures have denounced the proposed changes as Putin’s attempt to stay in power indefinitely.

“What he’s doing now is actually preparing the position for himself in order to step back but to keep absolute power,” said Mikhail Khodorkovsky, a Russian tycoon who spent 10 years in prison for challenging Putin and now lives in London. “This turnover of power — from the public field into the shadows — is what we call a constitutional coup.”

“It’s highly likely that Putin will bring forward both the Duma and the presidential elections, because things are not getting better, the situation is getting worse,” Khodorkovsky told The Associated Press. “The further he delays, the harder it will be for him to do it.”