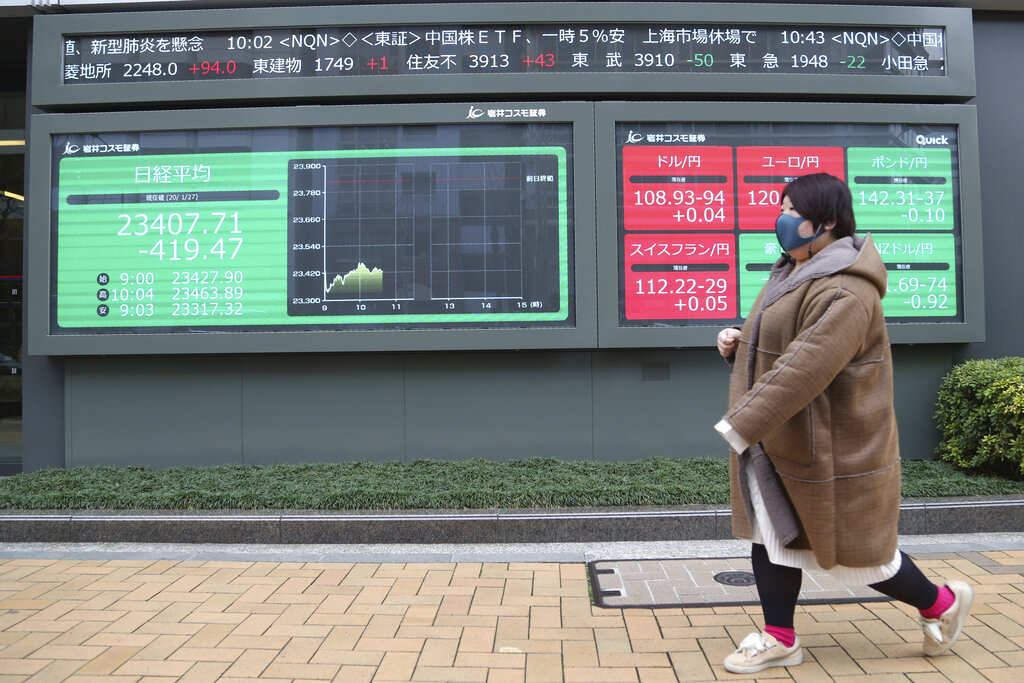 A woman walks by an electronic stock board of a securities firm in Tokyo, Monday, Jan. 27, 2020. Shares tumbled Monday in the few Asian markets open as China announced sharp increases in the number of people affected in an outbreak of a potentially deadly virus. (AP Photo/Koji Sasahara)

NEW YORK (AP) — Stock tumbled at the open on Wall Street following a sell-off in markets in Europe and Japan as investors grow more concerned about the potential economic impact of an outbreak of a deadly coronavirus. Chinese authorities reported 2,744 people sickened and 81 killed by the new virus first found in the central Chinese city of Wuhan. Major US indexes fell more than 1 percent today, with the Dow Jones Industrial Average dropping as many as 500 points. Hotels, airlines and other travel and tourism companies fell the most. Oil dropped more than 2%, while gold rose. Bonds rose and the yield on the 10-year Treasury fell to 1.61%.

China announced it was extending its week-long public holiday by an extra three days as a precaution against having the virus spread still further. By midnight Sunday, the National Health Commission said 80 people had died out of 2,744 cases that were confirmed.

Various governments have announced plans to evacuate people from Wuhan, the central Chinese city at the center of the pandemic. China halted outbound tours and Wuhan and some other cities stopped public transport, obliging tens of millions of people to stay where they are at the time of the country’s peak travel season.

Apart from the direct impact on tourism and travel, “any economic shock to China’s colossal industrial and consumption engines will spread rapidly to other countries through the increased trade and financial linkages associated with globalization,” Stephen Innes of AxiCorp said in a commentary.

The virus that has spread to a dozen countries in addition to Hong Kong and Macau can cause pneumonia and other severe respiratory symptoms. The World Health Organization has not yet declared the situation a global emergency, which would bring more money and resources to fight it, but could trigger still more economically damaging restrictions on trade and travel.

On Friday, the S&P 500 had its worst day since early October, dropping 0.9% as health care stocks saw steep losses. The sell-off followed news that a Chicago woman had become the second U.S. patient diagnosed with the new virus from China.

Investors have been shifting money into safe-play, high-dividend stocks and government bonds.The surge in bond-buying has sent yields lower.

Investors also are digging through the latest batch of company earnings reports, including strong results from chipmaker Intel and American Express. This week is shaping up to be the busiest week for earnings, with roughly 40% of the companies in the S&P 500 due to issue their results for the last three months of 2019.