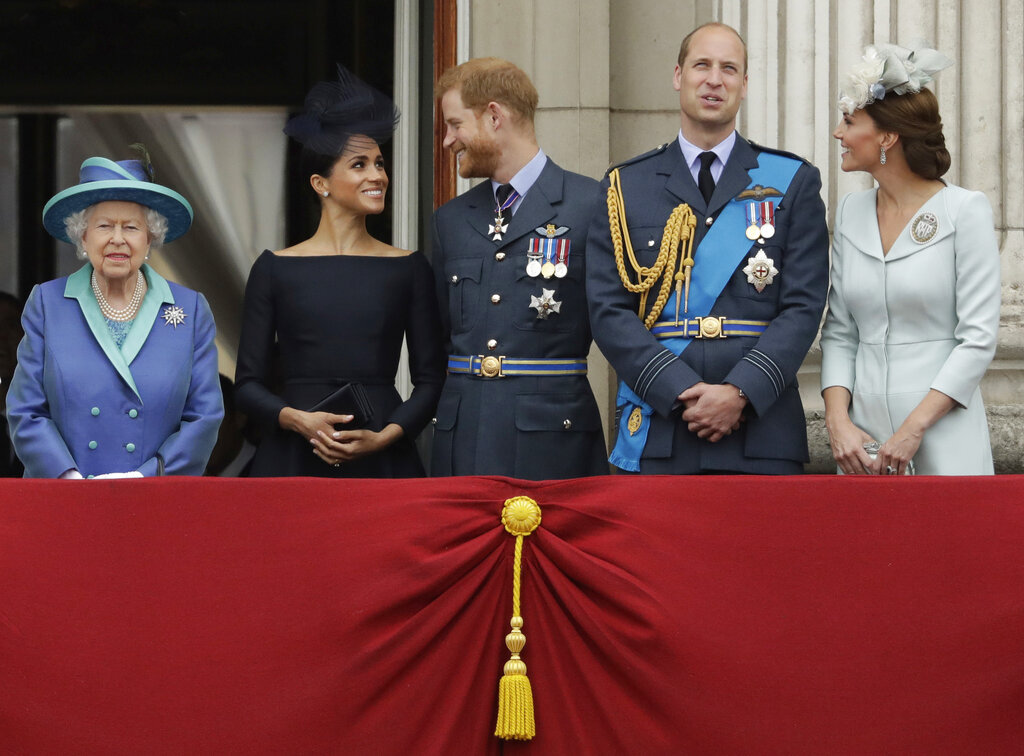 In this July 10, 2018, file photo Britain's Queen Elizabeth II, and from left, Meghan the Duchess of Sussex, Prince Harry, Prince William and Kate the Duchess of Cambridge watch a flypast of Royal Air Force aircraft pass over Buckingham Palace in London. In a stunning declaration, Britain's Prince Harry and his wife, Meghan, said they are planning "to step back" as senior members of the royal family and "work to become financially independent." (AP Photo/Matt Dunham, File)

SANDRINGHAM, England (AP) — Princes William and Harry slammed a newspaper report today describing a severe strain in their relationship, calling the story offensive and potentially harmful as they embark on talks regarding the future of the British monarchy.

The two brothers issued the unusual statement even as Queen Elizabeth II was set to hold face-to-face talks with Prince Harry for the first time since he and his wife, Meghan, unveiled their controversial plan to walk away from royal roles. The dramatic family summit is meant to chart a future course for the couple.

Though the statement did not name the newspaper, the Times of London has a front page story about the crisis in which a source alleged that Harry and Meghan had been pushed away by the “bullying attitude from” William. The joint statement insisted that the story was “false.”

“For brothers who care so deeply about the issues surrounding mental health, the use of inflammatory language in this way is offensive and potentially harmful,” the statement said.

The meeting reflects the queen’s desire to contain the fallout from Harry and Meghan’s decision to “step back” as senior royals, work to become financially independent and split their time between Britain and North America. The couple, also known as the Duke and Duchess of Sussex, made the announcement Wednesday without telling the queen or other senior royals first.

The meeting at the monarch’s private Sandringham estate in eastern England will also include Harry’s father Prince Charles and his brother Prince William. It comes after days of intense news coverage, in which supporters of the royal family’s feuding factions used the British media to paint conflicting pictures of who was to blame for the rift.

William is expected to travel to Sandringham from London and Harry from his home in Windsor, west of the British capital. Charles has flown back from the Gulf nation of Oman, where he attended a condolence ceremony Sunday following the death of Sultan Qaboos bin Said.

Meghan, who is in Canada with the couple’s baby son Archie, is likely to join the meeting by phone.

Buckingham Palace said “a range of possibilities” would be discussed, but the queen was determined to resolve the situation within “days, not weeks.” The goal was to agree on next steps at today’s gathering, which follows days of talks among royal courtiers and officials from the U.K. and Canada. Buckingham Palace stressed, however, that “any decision will take time to be implemented.”

One of the more fraught questions that needs to be worked out is precisely what it means for a royal to be financially independent and what activities can be undertaken to make money. Other royals who have ventured into the world of commerce have found it complicated.

Prince Andrew, for example, has faced heated questions about his relationship with the late convicted sex offender and financier Jeffrey Epstein. Andrew, the queen’s second son, has relinquished royal duties and patronages after being accused by a woman who says she was an Epstein trafficking victim who slept with the prince.

The Duke and Duchess of Sussex also face questions on paying for taxpayer-funded security. Home Secretary Priti Patel refused to comment, but said safety was a priority.

“I’m not going to provide any detailed information on the security arrangements for either them or any members of the royal family or for any protected individuals — that’s thoroughly inappropriate for me to do so,” she told the BBC. “At this moment in time, right now, the royal family themselves need some time and space for them to work through the current issues that they’re dealing with.”

The meeting will comes amid days of days of discussions about the future of the monarchy following the surprise announcement. Though senior royals were said to be hurt over not being told in advance of the statement’s release, Harry and Meghan’s friends have told Britain’s media that the couple were being pushed aside because of the desire of the Windsors to concentrate on the core of the royal family and focus on those in the line of succession — Prince Charles, William and William’s son George.

Tom Bradby, a TV journalist who is close to Harry and Meghan, warned in the Sunday Times that the royal family badly needed a peace deal to prevent “a protracted war” that could damage the monarchy.

With much at stake, the talks could be a step toward a changed monarchy.

“This is a seismic moment in royal history and British society,” Kate Williams, a historian at the University of Reading, wrote in the Observer. “It tells historians of the future much about our society, its self-perceptions, prejudices and fears. And most of all, it should mark our realization — as we didn’t learn after (Princess) Diana — that those who marry into the royal family are not our dolls to attack and throw around as we please.” 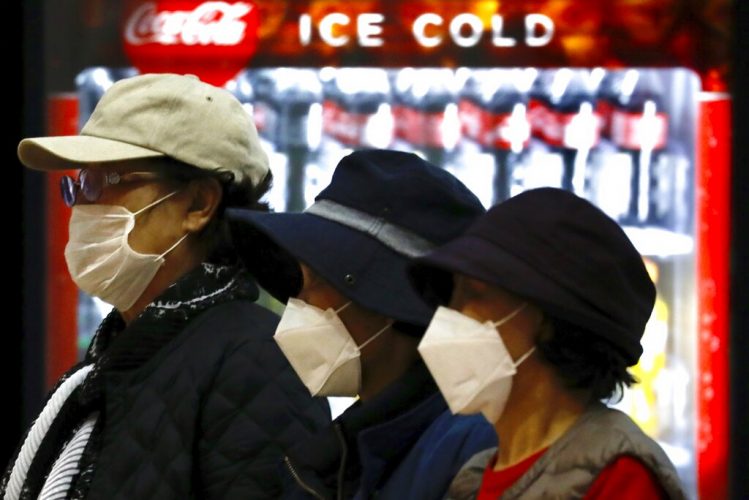 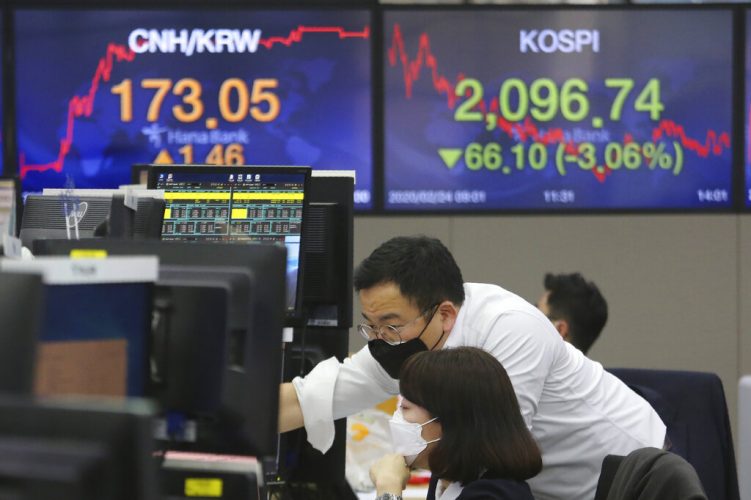 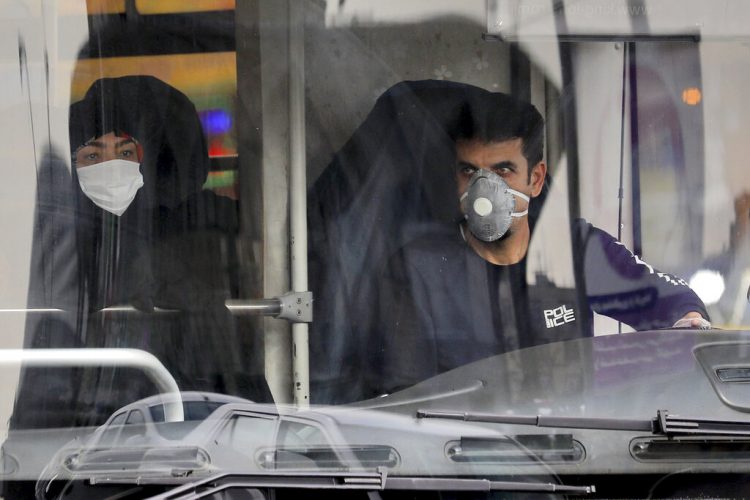 COLUMBIANA - The Columbiana Police Department is investigating an early Sunday morning train and car collision in ...

LIBERTY - A fire early Sunday morning at a hair salon in the township is under investigation. Reports state ...