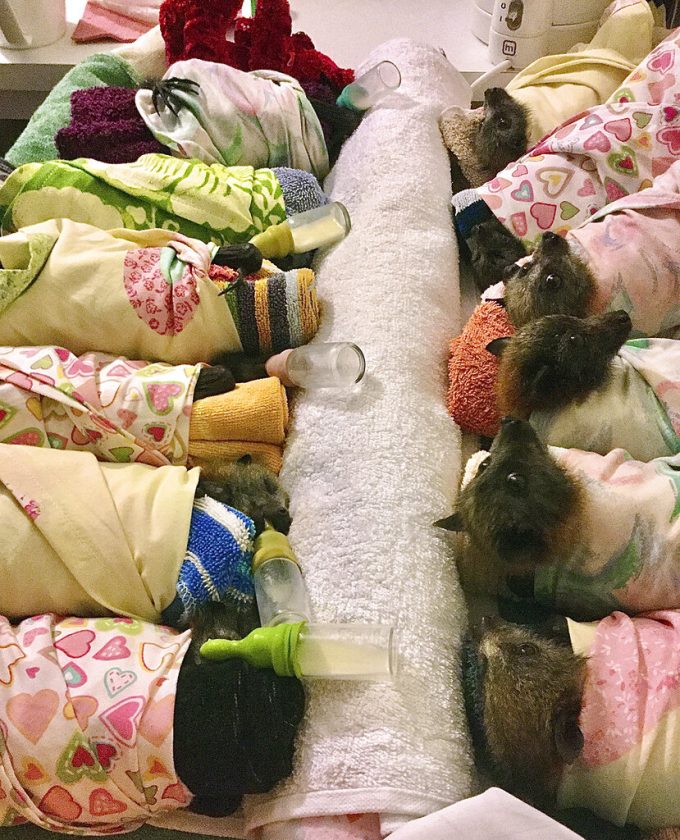 This Jan. 8 photo provided by Jackie Maisey shows Grey-headed Flying Fox bats prepared for a feeding at the Uralla, Australia, home of Maisey, a volunteer with Northern Tableands Wildlife Carers. The bats are swaddled in flannel wraps similar to those being made by thousands of crafters worldwide who are using their sewing, knitting and crocheting skills to make items for wildlife injured in the Australian brush fires. Some animal rescue groups, however, say monetary donations are needed more. (Jackie Maisey via AP)

CONCORD, N.H. (AP) — Kyla Gill had never so much as touched a sewing machine or picked up a crochet hook two weeks ago. Now, she’s hooked on crafting for critters 10,000 miles away, to the point of temporarily putting aside her floor refinishing business in Pittsburgh.

“I do hard labor, so I’m rough with my hands. Sewing, knitting — that’s just completely out of my realm,” she said. “But to go to work the next day knowing that there are animals and people suffering? I just pretty much wiped my schedule clean and put my projects on hold.”

Hoping to help wildlife harmed in the Australian wildfires, thousands of crafters worldwide are churning out swaddling wraps for bats, hanging enclosures for kangaroos, and cozy pouches for wallabies and other animals.

But confusion abounds about whether the items actually are needed or will be used.

The Animal Rescue Craft Guild, based in Australia, and associated groups have told their members to pause work while they take stock of donated items. And some wildlife organizations say what they need most is money, not handmade goods. Monetary donations can help pay for enclosures and cages, medical supplies, specialized animal feed and other critical items as needs evolve over time, said Megan Davidson, CEO of Wildlife Victoria.

“While we have been overwhelmed by the kindness of people wanting to donate items for wildlife, physical donations of clothes, knitted items and food are very difficult for relief agencies to sort through, distribute and store — especially during peak periods like the bushfire crisis we’re experiencing at the moment,” she said in an email.

“It is so lovely that people care and want to help. The most practical way to help native animals in Victoria right now is by a direct donation to Wildlife Victoria.”

The unprecedentedly fierce fires in southeast Australia have claimed the lives of at least 28 people since September, destroyed more than 2,600 homes and razed more than 10.3 million hectares (25.5 million acres), mostly in New South Wales state. The area burned is larger than the U.S. state of Indiana.

With experts estimating the animal death toll in the hundreds of millions, Australia’s federal government recently established a $50 million emergency fund for wildlife. Half of the money will go to front-line responder groups, with the other $25 million funding an advisory panel to analyze affected areas and plan for long-term habitat restoration.

In the short term, however, kind-hearted crafters are eager to help. Much of the outpouring can be traced back to Anna Key, who gathered together a bunch of sewing, knitting and crochet patterns approved by wildlife rescue groups and posted them on Facebook on Jan. 4. Within a week, they had been viewed more than 17 million times, and multiple Facebook groups popped up to coordinate and collect donations.

Key, who lives in Yamba in New South Wales, said she was inspired by her mother, who was knitting animal pouches, and figured she could put her own skills in marketing to good use. She called the response to what she’s dubbed the #globalcraftmovement overwhelming, but said participants should not be discouraged.

“Rescuing our Animals is a marathon, not a sprint — this will take months if not years to even try to recover from,” she said in an email. “We will still require crafts, just need to find out what is still needed first.”

Key has heard from groups in Singapore, Portugal and Hong Kong who are making items, along with schools across the United States. In Lee, New Hampshire, 10-year-old Gibson Griffith organized an event at his church to sew dozens of bed liners for crates and cages. About 15 people donated fabric, and more than a dozen showed up to help make the liners.

In Haverhill, Massachusetts, Kimberly McCullough had cut fabric for about 50 pouches and was about to start sewing when the confusion erupted.

“There were a lot of posts going around about stop-don’t-stop-stop-pause-keep-making-stuff, but we’re not shipping it,” she said. “So there was frustration about mixed messages, and then compounded with that, the disappointment, because everyone wants to help.”

McCullough has reached out to local animal shelters to see if they could use the items.

“It really opened my eyes to ways crafters can help other animal rescue organizations,” she said. “So, it felt better to realize, OK, I cut all this stuff out and maybe it’s not going to make it to Australia, but it might just make it to the Boston Animal Rescue League.”

Similarly, Gill has no regrets about her efforts, which included staying up until 2 a.m. one night, getting to the fabric store before it opened the next morning, sewing more than 60 pouches with her partner and learning how to crochet bird nests. They’ve become online friends with a woman in Australia, who has invited them to stay with her next year.

“It’s uplifting for her, and it made her feel better to see the humanity,” she said. “It makes me cry. It really touches me.”