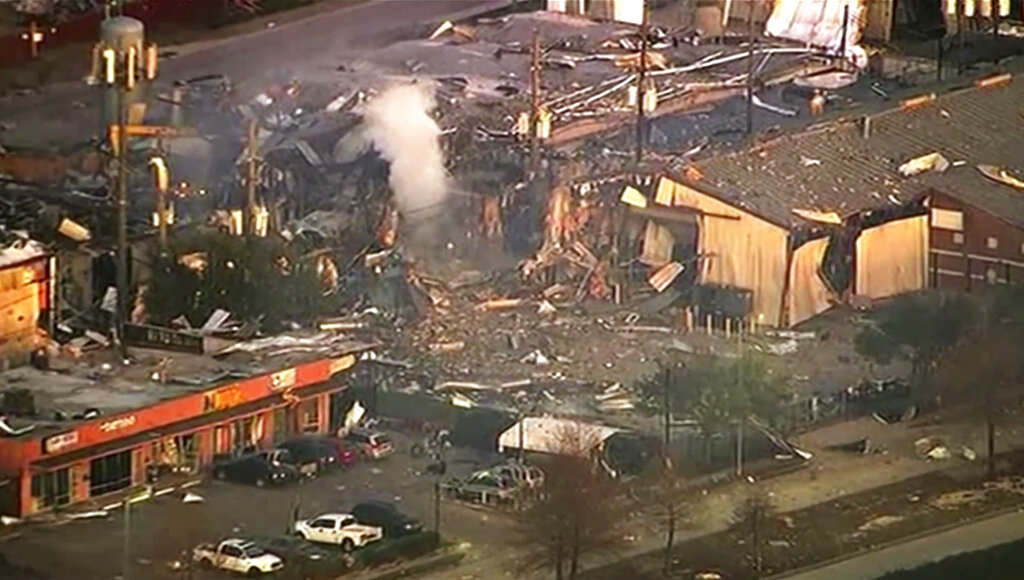 This aerial photo taken from video provided by KTRK-TV shows damage to buildings after an explosion this morning in Houston. A large explosion left rubble scattered in the area, damaged nearby homes and was felt for miles away. A fire continues to burn and people have been told to avoid the area. (KTRK-TV via AP)

HOUSTON (AP) — One person was missing following a large explosion at an apparent industrial building in Houston early today that heavily damaged nearby buildings and homes, left rubble scattered in the area and was felt miles away.

The Houston Fire Department said one person was taken to a hospital because of the blast and a fire burned at the site hours after the explosion. Houston Police Chief Art Acevedo said this morning that one person was unaccounted for.

People were told to avoid the area. Aerial images showed rubble where one building apparently had stood and debris strewn about. Surrounding structures had portions of their walls and roofs heavily damaged.

Mark Brady, who lives near the blast site, told Houston TV station KPRC that the explosion “knocked us all out of bed.”

He said: “It busted out every window in our house. It busted everybody’s garage door in around here … and closer toward the explosion over here, it busted people’s roofs in and walls in.”

The explosion, which appeared to be centered on an industrial building, shook other buildings about 4:30 a.m., with reports on Twitter of a boom felt across the city. People were told to avoid the area.

Houston police tweeted that officers were blocking off streets, but no evacuation was ordered. Harris County Sheriff Ed Gonzalez said first responders were checking on residents of nearby homes.

Several people told Houston TV station KHOU that the explosion was so loud, they thought a bomb had gone off or that a vehicle had crashed into their homes. At one man’s home about 1/4 mile (0.4 kilometers) away, glass doors were shattered, ceilings were cracked, and the lid of his toilet was even torn off, the station reported.

Southeast Texas has seen a series of explosions in recent years up and down the Texas Gulf Coast, which is home to the highest concentration of oil refineries in the nation. Last July, an explosion at an ExxonMobil refinery in Baytown left more than dozen people with minor injuries and put nearby residents under a shelter-in-place advisory for three hours.

In December, two blasts in the coastal city of Port Neches shattered windows and ripped the doors from nearby homes.