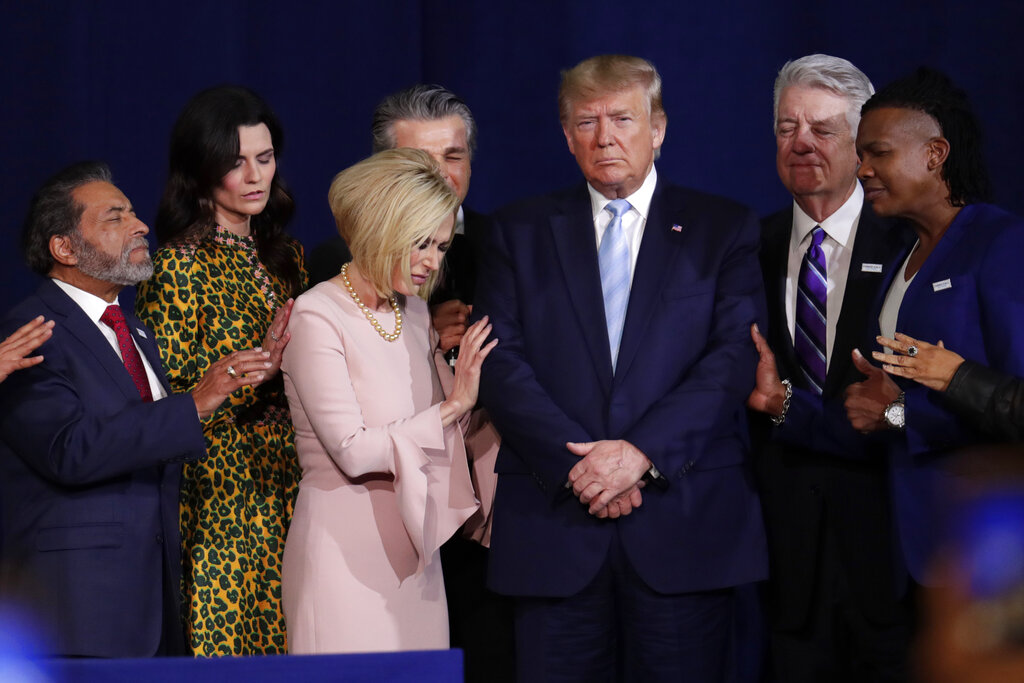 In this Jan. 3 file photo, faith leaders pray with President Donald Trump during a rally for evangelical supporters at the King Jesus International Ministry church in Miami. As he heads into the 2020 election, Donald Trump will become the first sitting president to address the March for Life when he takes the stage today at the annual anti-abortion gathering. (AP Photo/Lynne Sladky, File)

WASHINGTON (AP) — It was just four years ago that a political committee supporting one of Donald Trump’s Republican rivals unveiled an ad slamming his views on abortion, complete with footage from a 1999 interview in which he declared, “I am pro-choice in every respect.”

Now, as he heads into the 2020 election, Trump will become the first sitting president to address the March for Life, taking the stage today at the annual anti-abortion gathering that is one of the movement’s highest profile and most symbolic events.

It’s Trump’s latest nod to the white evangelical voters who have proven to be among his most loyal backers. And it makes clear that, as he tries to stitch together a winning coalition for reelection, Trump is counting on the support of his base of conservative activists to help bring him across the finish line.

“I think it’s a brilliant move,” said Ralph Reed, chair of the Faith and Freedom Coalition and one of Trump’s most prominent evangelical supporters. Reed said the president’s appearance would “energize and remind pro-life voters what a great friend this president and administration has been.”

It also shows how much times have changed.

Past presidents who opposed abortion, including Ronald Reagan and George W. Bush, steered clear of personally attending the march to avoid being too closely associated with demonstrators eager to outlaw the procedure. They sent remarks for others to deliver, spoke via telephone hookup or invited organizers to visit the White House.

Over the last 10 years, however, the Republican Party has undergone a “revolution,” displaying a new willingness to “embrace the issue as not only being morally right but politically smart,” said Mallory Quigley, a spokeswoman for the Susan B. Anthony List and Women Speak Out PAC. The group is planning to spend $52 million this cycle to help elect candidates opposed to abortion rights. Its president, Marjorie Dannenfelser, will serve as national co-chair of a new campaign coalition, “Pro-life Voices for Trump.”

Indeed, among both Republicans and Democrats, there is a greater appetite for hard-line positions for and against abortion rights.

“There used to be a middle in this country and candidates would not want to alienate the middle,” said Ari Fleischer, who served as White House press secretary under President George W. Bush. “And it just seems that that is over and that both parties play to their bases to get maximum turnout from their base.”

In addition, Flesicher said, Trump is far less tethered to tradition than past presidents and “happy to go where his predecessors haven’t.”

During his first three years in office, Trump has embraced socially conservative policies, particularly on the issue of abortion. He’s appointing judges who oppose abortion, cutting taxpayer funding for abortion services and painting Democrats who support abortion rights as extreme in their views.

“President Trump has done more for the pro-life community than any other president, so it is fitting that he would be the first president in history to attend the March for Life on the National Mall,” said White House spokesman Judd Deere.

This is not the first time Trump gave serious consideration to an appearance. Last year, he wanted to go and came close to attending, according to a person familiar with the discussions who spoke on condition of anonymity to discuss internal planning. But the trip never came together because of concerns about security so Trump joined the event via video satellite from the White House Rose Garden instead.

Trump’s thinking on the matter was simple: If he supported the cause, “why wouldn’t he show up to their big event?” said Matt Schlapp, chair of the American Conservative Union and a close ally of the White House. He said the appearance would be deeply significant for those in participants.

“I’ve had people be moved to tears over the fact that he’s going,” said Schlapp. “It’s a big deal.”

While Schlapp said he didn’t think Trump’s decision to attend was driven by election-year politics, he said it was nonetheless a “smart move politically” as well as “the right move morally.”

“It will cement even tighter the relationship that he has with conservative activists across the country,” Schlapp said.

During his video address last year, Trump sent a clear message to the thousands of people braving the cold on the National Mall. “As president, I will always defend the first right in our Declaration of Independence, the right to life,” he said.

The rhetoric underscored Trump’s dramatic evolution on the issue from his days as a freewheeling New York deal-maker, when he described himself as “very pro-choice” in a 1999 interview on NBC’s “Meet the Press.”

During his 2016 campaign for the Republican nomination, Trump said his views had changed and that he was now opposed to abortion, but for three exceptions: In the case of rape, incest and when the life of the mother is at risk.

Yet Trump’s unfamiliarity with the language of abortion activism was clear, including when he offered a bungled response during a televised town hall and was forced to clarify his position on abortion three times in a single day.

Asked, hypothetically, what would happen if abortion were outlawed, Trump said there would have to “be some form of punishment” for women who have them, prompting a backlash that managed to unite abortion rights activists and opponents, including organizers of the March for Life.

Asked to clarify his position, Trump’s campaign initially issued a statement saying he believed the issue should rest with state governments. He later issued a second statement that said doctors, not women, should be punished for illegal abortions.

Since that time, however, Trump has — to the shock of many — become a darling of the anti-abortion movement.

“These voters who are pro-life love Donald Trump and they will crawl across broken glass to get him re-elected,” said Reed, who expressed amazement at the transformation. “Whatever you think of this president, there is no question that both at a policy level and politically, he has masterfully capitalized on his pro-life position in a way I think no one could have envisioned four years ago,”

Critics, for their part, accuse Trump of using the march to try to distract from his impeachment trial in the Senate.

Ilyse Hogue, president of NARAL Pro-Choice America, called it “an act of desperation, plain and simple,” and accused Trump of taking “refuge in his ability to whip up a radical anti-choice base, spewing falsehoods when he feels threatened.” Alexis McGill Johnson, acting president of the Planned Parenthood Action Fund, accused the president of carrying out “a full-out assault on our health and our rights.”

“While Trump stands with the small number of Americans who want politicians to interfere with their personal health decisions, we’ll be standing with the nearly 80 percent of Americans who support abortion access,” she said.