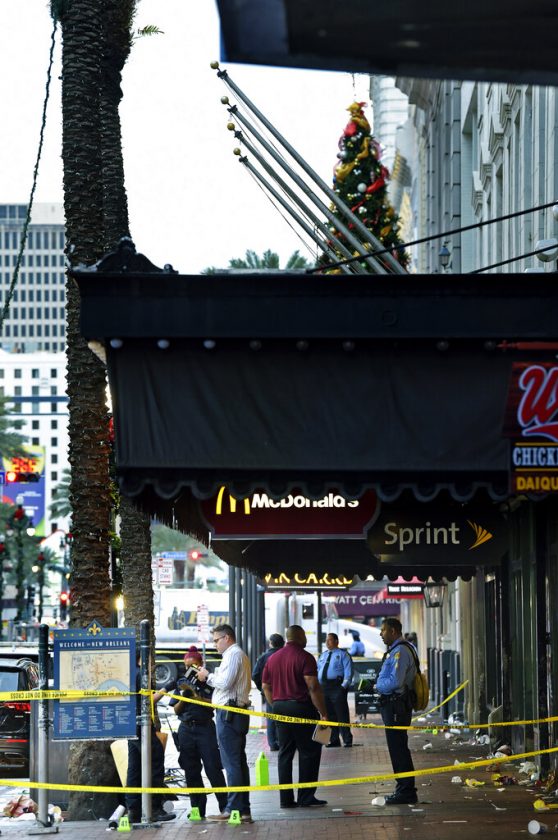 NEW ORLEANS (AP) — Ten people were shot and wounded early today near the French Quarter in New Orleans, a popular spot for tourists. Hours later in another part of town, another shooting killed two men and wounded two others.

Police said both shootings remain under investigation, and authorities did not immediately draw any connection between them.

Two of the 10 people shot on Canal Street near the French Quarter were in critical condition in local hospitals, Police Superintendent Shaun Ferguson said. No arrests were announced by midday today, and police did not immediately release information about any of the victims.

“What happened in our city overnight was a cowardly and senseless act that we cannot and will not tolerate,” Ferguson said in a statement.

He said New Orleans has seen a significant reduction in violent crime over the past four years.

Ferguson told The New Orleans Advocate/The Times-Picayune that a person of interest has been detained, but it was not immediately clear whether the person had any connection to the shooting.

The first shootings happened about 3:20 a.m. on a busy commercial block of Canal Street that has streetcar tracks and is near many hotels.

Ferguson said police quickly responded to the scene as patrols were heightened for this weekend’s Bayou Classic, the annual Thanksgiving weekend rivalry football game between Grambling State and Southern University at the Mercedes-Benz Superdome.

“While this investigation is in the very beginning stages, one thing is certain — we will not stop until we identify and arrest those responsible,” Ferguson said in his statement.

“The shootings on Canal Street early this morning were an ugly disruption of an otherwise beautiful holiday weekend. We will do everything we can to wrap the victims and their families in our love and support, and to bring the criminals responsible to justice,” she said via Twitter today.

Kenneth Culbreth told The New Orleans Advocate/The Times-Picayune that he had gone into a CVS pharmacy in the early morning hours to make a quick purchase. Moments later, he walked out to a crime scene.

“On my way out of the CVS, I heard pops,” Culbreth said. “It was so many, I couldn’t keep count.”

Culbreth spent the rest of the morning watching the scene, with law enforcement and several emergency vehicles moving in and out at a rapid pace.

Police initially said 10 people were wounded. They later said 11 were wounded, but the police department then sent a statement saying the correct number was 10.

The shooting on Canal Street happened near the spot where 10 people were shot, one of them fatally, on Bourbon Street in the French Quarter on Nov. 27, 2016. One man was convicted of attempted manslaughter and obstruction of justice, but jurors could not reach a verdict on a second-degree murder charge. Another man awaits trial.

The shooting this afternoon that killed two men and wounded two others happened in a residential area about 3 miles north of the French Quarter.