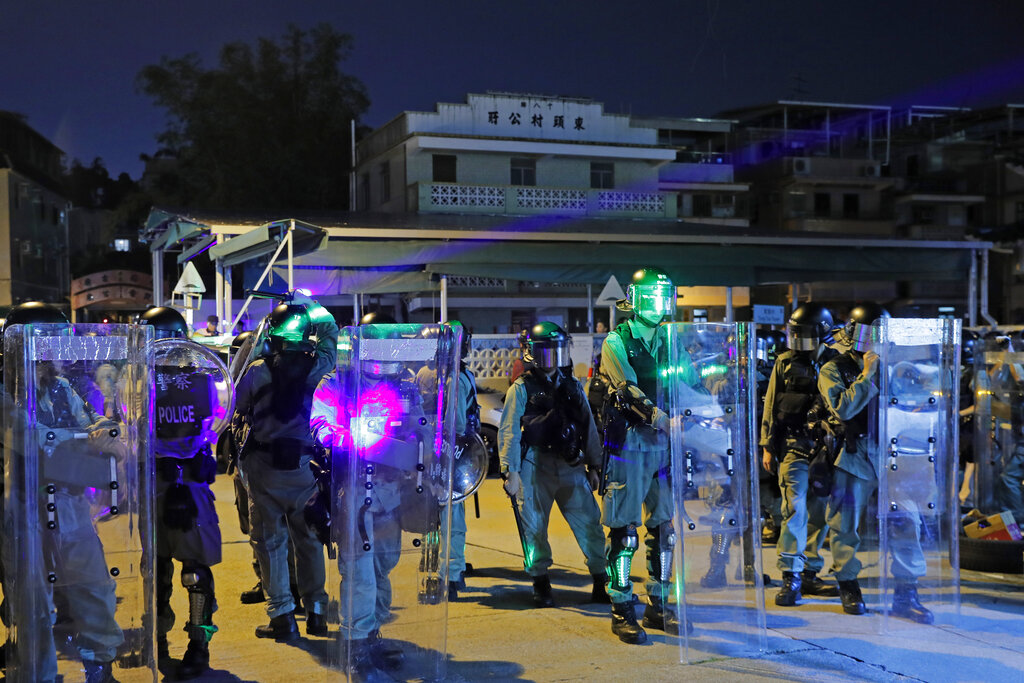 In this Aug. 21 file photo, riot police are illuminated by laser pointers from protesters during a protest at the Yuen Long MTR station in Hong Kong. A Hong Kong lawmaker has voiced concern the conviction of a teenager for carrying a laser pointer could pave the way for more prosecutions against anti-government protesters in the semi-autonomous Chinese territory. (AP Photo/Kin Cheung, file)

HONG KONG (AP) — A Hong Kong court ruling today that a laser pointer carried by a teenager was an offensive weapon marked a tougher stance by the judiciary after months of anti-government protests in the semi-autonomous Chinese territory, with a lawmaker warning it could lead to more prosecutions of demonstrators.

Local broadcaster RTHK said a court found a 16-year-old male student guilty of possessing the laser pointer and a modified umbrella — deemed to be offensive weapons. The items were found in his bag, along with a helmet and other protective gear used by protesters, when he was detained Sept. 21 near the site of a planned rally for democracy reforms.

It said the court ruled the youth had intended to use the laser pointer to cause harm to police by shining it in their eyes. He is to remain in custody until sentencing on Nov. 25.

While there has been controversy in the past over the use of laser pointers, legislator James To said the court’s ruling was the first to designate the tool as a weapon since protests broke out in June. It reflected a harder position by courts, who have been accused by pro-Beijing supporters of being too lenient with protesters.

To, who is also a lawyer, said evidence was weak as the youth was merely carrying the laser pointer in his bag and didn’t use it.

“I do not think this is a fair conviction and it may lead to police abuse in prosecution of possession of laser pointers without good evidence of the intention of hurting people,” he told The Associated Press. “This case can also create a precedent of more people being prosecuted for carrying ordinary objects like laser pointers and umbrellas.”

The offense carries a jail term of up to three years, but To said the court can impose a lighter sentence, such as placing him on probation or community service, since he is a juvenile.

The court ruling came a day after Chinese Vice Premier Han Zhen said restoring order in Hong Kong is the responsibility of all three branches of government including the judiciary, following talks with the city’s embattled leader, Carrie Lam.

More than 3,300 people have been detained amid mounting violence, and Beijing has indicated it will tighten its grip on the territory to quell the unrest.

Young people have been at the forefront of the protests sparked by a now-shelved China extradition bill, viewed as a sign of creeping interference by Beijing on Hong Kong’s judicial freedoms and other rights guaranteed when the former British colony was returned to China in 1997.

The movement has since expanded to other demands including direct elections for the city’s leaders and an independent inquiry into alleged police brutality against protesters.