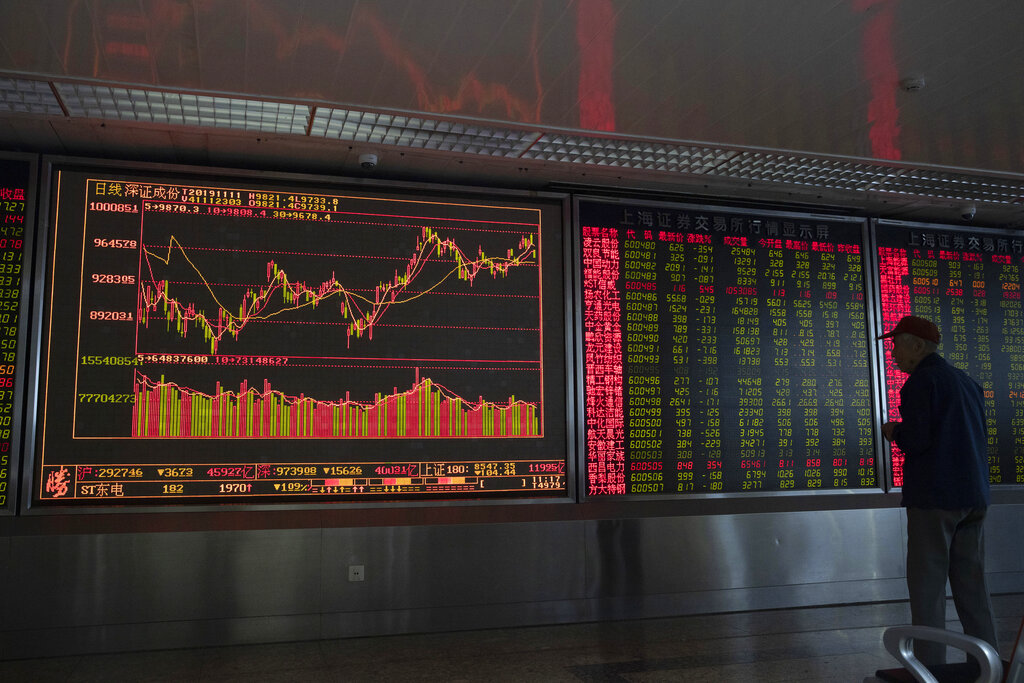 An investor monitors stock prices today at a brokerage in Beijing. Shares declined today in Asia as investors watched for the latest developments in the China-U.S. trade war sage. (AP Photo/Ng Han Guan)

LONDON (AP) — Shares around the world fell today as hopes for a breakthrough in the trade war between the United States and China diminished after President Donald Trump said Washington had not agreed to gradually roll back tariffs as negotiations progress.

Hopes were shaken when Trump on Friday dismissed a Chinese official’s assertion that the U.S. side had agreed to gradually lift tariffs on Chinese goods that it has imposed in the conflict over trade and technology policies.

A Chinese Commerce Ministry spokesman had said Thursday that the two sides had agreed to a phased cancellation of their tariff hikes as part of an agreement now under negotiation.

“They’d like to have a rollback,” Trump told reporters at the White House. “I haven’t agreed to anything.”

That raised doubts in the markets that some sort of agreement is imminent.

Britain’s FTSE 100 index underperformed, falling by 1.2 percent to 7,270 after the pound struck a one-week high of $1.2880 following the news that the Brexit Party won’t contest seats won by the governing Conservative Party in 2017 so as not to split the pro-Brexit vote. That announcement could boost the chances that Prime Minister Boris Johnson’s Conservatives win a majority in the general election on Dec. 12.

U.K. stocks often have an inverse relationship with the pound as many companies listed on the index are international companies so a higher currency could weigh on exports as well as reducing their dollar earnings.

In Asia, Hong Kong led the retreat, with the Hang Seng losing 2.6 percent to 26,926.55 after a police officer shot and wounded a protester.

Uncertainty has risen in the city after more than five months of protests that began with a fight over an extradition bill that has expanded to include demands for greater democracy and police accountability.

In other trading, benchmark crude oil lost 75 cents to $56.49 a barrel in electronic trading on the New York Mercantile Exchange while Brent crude oil, the international standard, lost 70 cents to $61.81 per barrel.