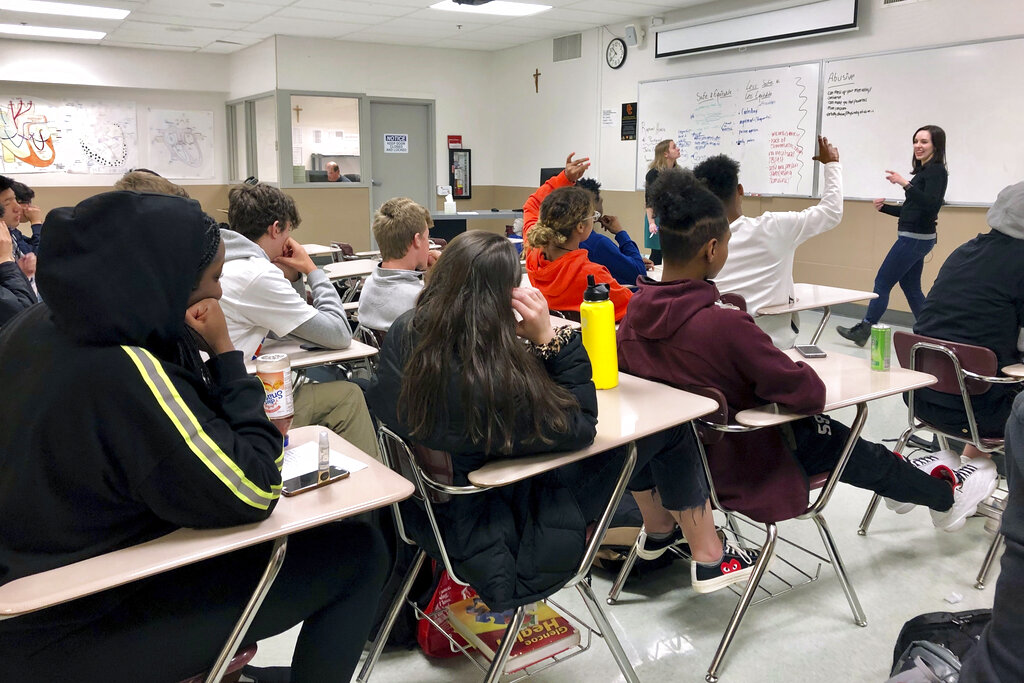 Instructors from Raphael House lead a classroom discussion about consent and healthy relationships with a class of sophomores at Central Catholic High School in Portland, Ore. Most young Americans believe in the value of higher education, but many also believe that a high school diploma alone is enough for success, and they view job training as better preparation than any type of college degree, according to a poll by The Associated Press-NORC Center for Public Affairs Research. (AP Photo/Gillian Flaccus, File)

Although most young Americans believe in the value of higher education, many still consider a high school diploma alone to be enough for success, according to a survey of teens and young adults by The Associated Press-NORC Center for Public Affairs Research.

The findings alarm some experts who say young Americans don’t seem to be getting the message that college pays off. Federal labor data shows a wide earnings gap between Americans who do and do not have a college degree, and unemployment rates are far lower for those with a bachelor’s or master’s degree.

More than half of Americans ages 13 through 29 do see college as a path to economic success, but about 4 in 10 believe a bachelor’s degree prepares people only somewhat well, or even poorly, for today’s economy.

Meanwhile, about half said their high school education has provided the skills they need to get a good job right after they graduate. And 45 percent say a high school diploma is good preparation for future successful workers.

Researchers disputed that notion, saying it has been decades since a high school diploma was enough to earn a good living.

“The data just do not support that,” said Thomas Brock, a research professor and director of the Community College Research Center at Columbia University. “With a high school diploma alone, it’s very hard to earn the kinds of wages one would need to support a family.”

In 2018, the median earnings for workers with only a high school diploma was $730 a week, according to the U.S. Bureau of Labor Statistics. For those with a bachelor’s degree, it was $1,200, while those with a master’s degree typically made $1,400 a week.

And more than any type of degree, 73 percent of young Americans said they think job experience is good preparation for success. Their esteem for practical experience is shared by the Trump administration, which has pushed to expand apprenticeship programs, and experts say it reflects today’s economy, in which more employers require internships or other work experience.

While 6 in 10 said a bachelor’s degree is a route to success, an equal number said they see vocational school as good preparation, and about half see the same value in an associate degree. The finding was a surprise to some researchers who say students — and their parents — often think of college only as a bachelor’s degree.

“That’s not what I would expect to see,” said Heather McKay, director of the Education and Employment Research Center at Rutgers University. “It’s really great that young people are thinking of these alternatives, because there are some really good non-degree credential options out there.”

The survey also found disparities in the types of colleges young Americans choose. Overall, 3 in 4 said they plan to attend some type of college or have already done so. For about half, their plans included a four-year university, while about a quarter opted for community college or vocational school. Another quarter had no college plans.

Wealthier Americans were more likely to pursue four-year universities, while those from poorer families leaned toward other options or no college at all. Those from wealthier families were also more likely to say their parents were helping pay for tuition and many forms of college preparation.

McKay said the findings suggest students are steering toward education choices they think they can afford. “Some of these decisions might be based on money rather than value or anything else,” she said.

In some ways, young Americans are right to be worried, said Anthony Carnevale, director of Georgetown University’s Center on Education and the Workforce. The transition to adult independence is taking place later in life, he said. Education requirements for good jobs have grown, and there are fewer available to young people.

Still, he said, there’s evidence that investments in college pay off.

“Eighty percent of four-year college degrees do bring sufficient earnings to pay for the cost over a career,” Carnevale said. “The truth is, it’s very hard for colleges at the four-year level to build programs that aren’t worth the loan.”

Debate over student debt and college affordability has come to the fore recently as Democratic presidential candidates court young voters with promises to make college free and erase debt. And many young Americans say they like those ideas, the poll found.

Overall, 65 percent of young Americans said they support making tuition free at community colleges, an idea that has been adopted by some states and is being proposed nationally by Democrats including former Vice President Joe Biden.

Both ideas have wider support from Democrats, but each one had backing from nearly half of young Republicans.

Despite their reservations about debt and affordability, young Americans ultimately see value in college. Only about a quarter said attending a four-year college brings more disadvantages than advantages. More than 7 in 10 said college brings more benefits or that the balance is equal.

The AP-NORC poll of 2,573 teens and young adults ages 13 through 29 was conducted Aug. 7-Sept. 9 using a combined sample of interviews from NORC’s probability-based AmeriSpeak Panel, which is designed to be representative of the U.S. population, and interviews from opt-in online panels. The margin of sampling error for all respondents is plus or minus 3.7 percentage points. The AmeriSpeak panel is recruited randomly using address-based sampling methods, and respondents later were interviewed online or by phone.