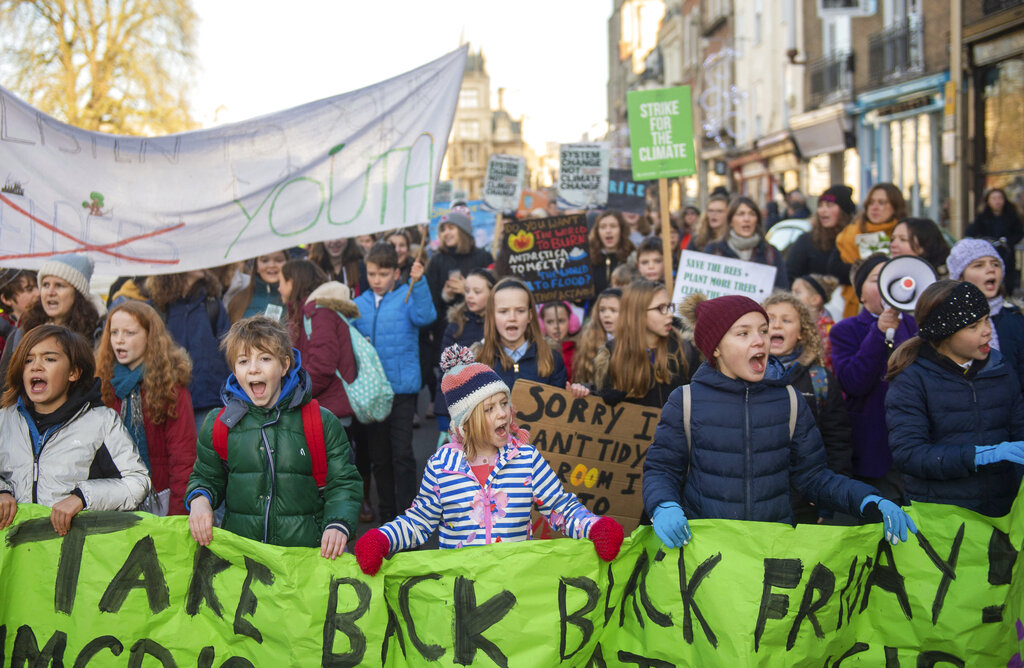 Children take part in the YouthStrike4Climate march today in Cambridge, England. Environmentalists around the world are joining a global day of protests today in a symbolic gesture to demand that governments act against climate change. (Joe Giddens/PA via AP)

The “global day of action” was expected to see rallies in hundreds of cities around the world, days before officials gather Monday in Madrid for talks on the issue.

Janet Reynolds in Sydney said she had lost everything in an “inferno, an absolute firestorm that raced through my property.” Student Daisy Jeffrey added: “People have lost their homes, people have lost their lives. We have to ask: How far does this have to go before our government finally takes action?”

Swedish teenage activist Greta Thunberg, who is traveling across the Atlantic by sailboat to attend the climate talks, sent a message of support to protesters. “Everyone’s needed. Everyone’s welcome. Join us,” she said on Twitter.

About two dozen environmental activists in the German capital symbolically jumped into the chilly waters of the Spree river in front of parliament to protest a government-backed package of measures they say won’t be enough to reduce the country’s greenhouse gas emissions.

The package was blocked today by Germany’s upper house, which represents the country’s 16 states.

In South Africa, a few dozen people holdings signs saying “Not Cool” and “Stop Pollution Now” protested outside the Johannesburg Stock Exchange in the summer heat of the Southern Hemisphere.

Africa contributes least to climate change and is the least prepared to deal with it. Temperatures in parts of the continent are projected to rise more quickly than the global average.

“The reality is that we have a climate change emergency,” protest organizer Elana Azrai said. She noted water shortages in parts of the country amid a drought in southern Africa.

Elsewhere, officials have raised the alarm over unusually severe rainfall in East Africa and a pair of cyclones that ripped into Mozambique within weeks of each other early this year.

Scores of young Nigerians marched in downtown Lagos displaying messages such as “There is no planet B” and “Stop Denying the Earth is Dying” as passing vehicles slowed and honked in support.

The megacity is Africa’s most populous and is among its coastal cities threatened by rising sea levels.

Man shoots at vehicle on Palmyra