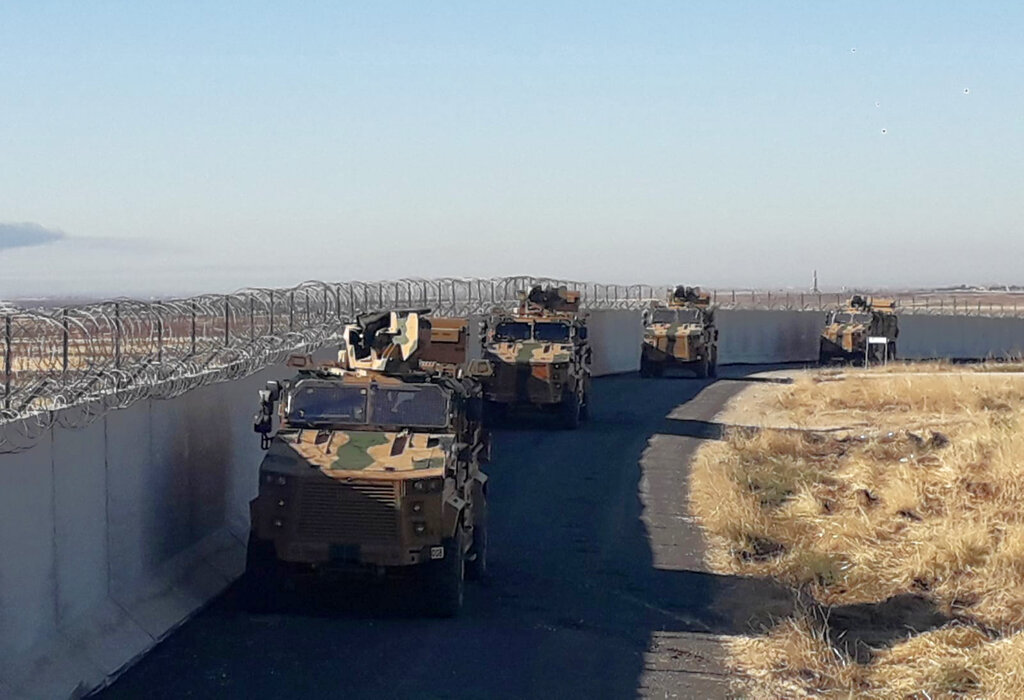 Turkish army armored vehicles arrive today near the Turkish town of Idil at the Turkey-Syria border before Turkish and Russian troops conduct their third joint patrols in northeast Syria. Turkish and Russian troops are conducting joint patrols under a deal between the two countries that forced Syrian Kurdish fighters to withdraw from areas bordering Turkey. (Turkish Defence Ministry via AP, Pool)

IDIL, Turkey (AP) — A Syrian protester was killed after he was run over by a Turkish military vehicle during a joint Turkish-Russian patrol in northeastern Syria today, Kurdish forces and a Syria war monitoring group said.

The man was among a group of residents who had chased and pelted the convoy with shoes and stones, prompting Turkish troops to fire tear-gas to disperse the protesters. Ten people were hospitalized, according to the Rojava Information Center, an activist operated group in Kurdish-held areas.

The Syrian Observatory for Human Rights, a war monitoring group, said the man was run over in the village of Sarmasakh near the border by a Turkish vehicle which was conducting a joint patrol with the Russians — the third under a cease-fire deal brokered by Moscow that forced Kurdish fighters to withdraw from areas bordering Turkey.

The patrols are aimed at allowing Turkey to ensure that the Syrian Kurdish fighters, formerly allied with the U.S., have evacuated the border zone after America began pulling its troops out of northeastern Syria. The agreement with Russia — and a separate one with the U.S. — halted the Turkish invasion of Syria last month that targeted groups it considers a security threat for their links to a Kurdish insurgency inside Turkey.

Videos circulating online today showed a group of men running after the Turkish-Russian vehicles as they drove, throwing stones at it. A man is seen trying to mount one of the vehicles and then the men can be heard shouting, apparently after the man is run over. Other videos from the area showed men, women and children pelting armored vehicles as they drove near a cemetery before speeding away.

There was no immediate comment from the Russian or Turkish military about the incident.

Turkey’s Defense Ministry said the troops were patrolling a region between Qamishli and Derik, east of the Euphrates River. It said the patrols were being supported by drones, but provided no further details.

Mutafa Bali, a spokesman for the Kurdish-led Syrian Democratic Forces, tweeted that Turkish troops fired tear gas on protesters in Derik, injuring 10 people. The town is controlled by SDF and American forces, but the Turkish troops were passing through on the patrol.

Turkish President Recep Tayyip Erdogan complained this week that Syrian Kurdish fighters were still present in areas along the border, despite the separate agreements with Russia and the United States.

Erdogan also said Turkish troops were being attacked by some Syrian Kurdish fighters from areas they had retreated to, adding that Turkey would not “remain a spectator” to these assaults.

The U.N. said today that 92 civilians have died so far as a result of Turkey’s incursion into northern Syria. Rupert Colville, a spokesman for the U.N. human rights office, said the death toll was based on “verified incidents” that included to Nov. 5.

Also in northern Syria, the Observatory and the Thiqa news agency, an activist collective, said today a suicide attacker detonated a truck outside a police station in the northern town of Rai that is controlled by Turkey-backed opposition fighters.