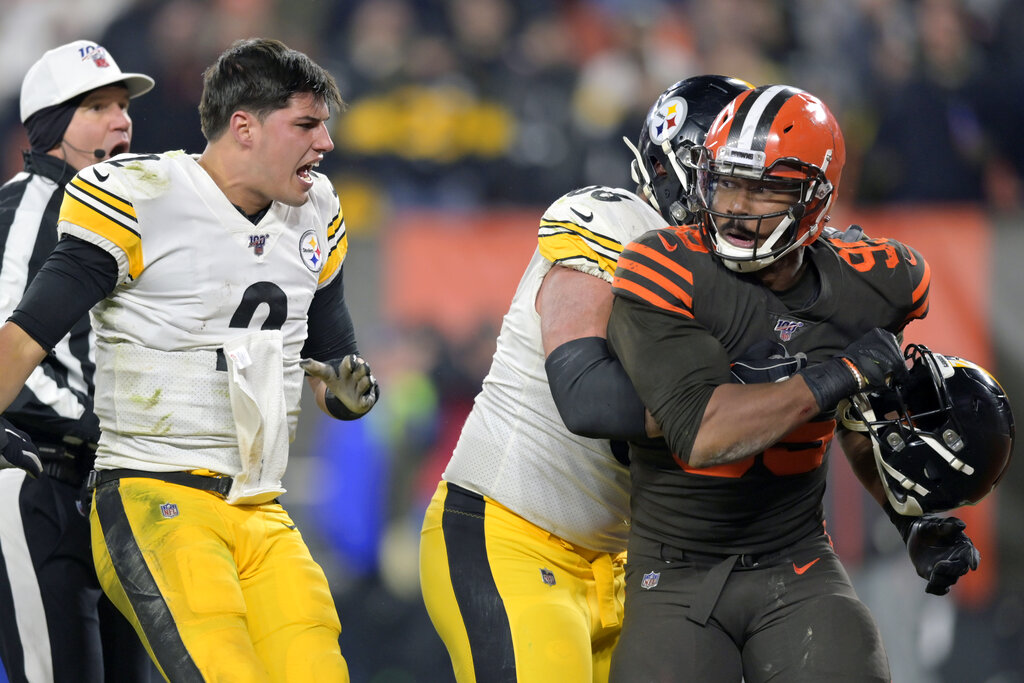 Cleveland Browns defensive end Myles Garrett (95) reacts after swinging a helmet at Pittsburgh Steelers quarterback Mason Rudolph (2) in the fourth quarter of an NFL football game Thursday in Cleveland. The Browns won 21-7. Garrett has been suspended for the rest of the season. (AP Photo/David Richard)

CLEVELAND (AP) — Browns defensive end Myles Garrett was suspended for at least the rest of the regular season and postseason by the NFL today for using a helmet “as a weapon” and striking Pittsburgh quarterback Mason Rudolph in the head.

His violent outburst in the final seconds of Thursday’s nationally televised game against the Steelers landed him the longest suspension for a single on-field infraction in league history. Tennessee’s Albert Haynesworth was suspended five games in 2006.

Garrett was also fined an undisclosed amount and must meet with Commissioner Roger Goodell’s office before his reinstatement is considered.

Garrett ripped off Rudolph’s helmet and clobbered him on top of the head, triggering a brawl between the rivals. Rudolph avoided serious injury and called the defensive star’s attack “cowardly and bush league.”

The league said Garrett “violated unnecessary roughness and unsportsmanlike conduct rules, as well as fighting and removing an opponent’s helmet and using it as a weapon.”

Steelers center Maurkice Pouncey was suspended three games for punching and kicking Garrett, and Browns defensive tackle Larry Ogunjobi was suspended for one game. He shoved Rudolph to the ground from behind during the melee. The suspended players have three business days to appeal their penalties.

“We are extremely disappointed in what transpired last evening at the end of our game,” Browns owners Dee and Jimmy Haslam said in a statement. “There is no place for that in football and that is not reflective of the core values we strive for as an organization.

“We sincerely apologize to Mason Rudolph and the Pittsburgh Steelers. Myles Garrett has been a good teammate and member of our organization and community for the last three years but his actions last night were completely unacceptable. We understand the consequences from the league for his actions.”

Garrett’s attack on Rudolph drew condemnation across the league and sports world.

His disturbing actions will cost the Browns (4-6), who have moved back into the playoff race but must now play the rest of this season without their best defensive player.

Rudolph’s agent, Tim Younger, tells media outlets that no legal options “have been removed from the table.”