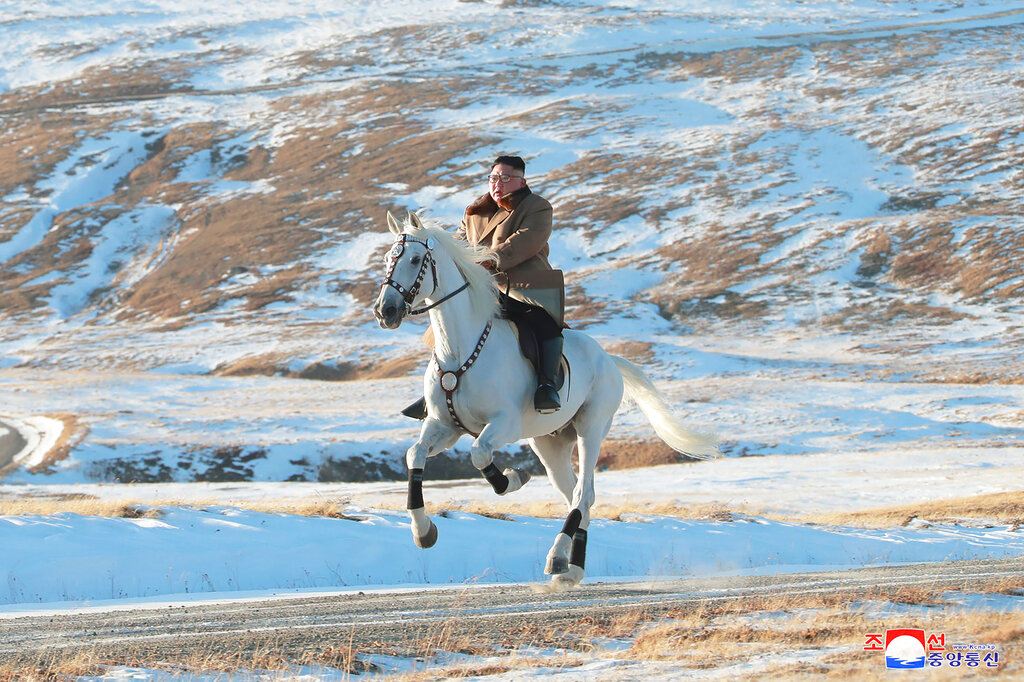 SEOUL, South Korea (AP) — North Korea released a series of photos today showing leader Kim Jong Un riding a white horse to a sacred mountain he has often climbed before making key decisions. Near the mountain, Kim reportedly vowed to overcome U.S.-led sanctions that he said had both pained and infuriated his people.

The images and Kim’s rhetoric appeared aimed at bolstering his leadership at home as the North tries to pressure the United States into making concessions in nuclear diplomacy.

The photos showed a bespectacled Kim wearing a long, light-brown coat and riding on horseback up snow-covered Mount Paektu. The mountain, the highest point on the Korean Peninsula, is sacred to North Koreans, and both it and the white horse are symbols associated with the Kim family’s dynastic rule.

Kim previously visited Mount Paektu before executing his powerful uncle in 2013 and entering into diplomacy with South Korea and the U.S. in 2018.

The photos were released by the North’s official Korean Central News Agency, or KCNA, days after North Korea’s first nuclear talks with the U.S. in more than seven months fell apart.

South Korean media quickly speculated that Kim may be considering a new strategy in his dealings with the U.S. because he’s previously demanded that Washington come up with new proposals to salvage the stalemated diplomacy by the end of December.

“He, sitting on the horseback atop Mt Paektu, recollected with deep emotion the road of arduous struggle he covered for the great cause of building the most powerful country with faith and will as firm as Mt Paektu,” KCNA said.

The white horse is also a propaganda symbol for the Kim family, which has ruled North Korea for seven decades with a strong personality cult surrounding family members. State media have occasionally shown Kim, his sister and his father riding white horses. The symbolism goes back to Kim Il Sung, who according to the North’s official narrative rode a white horse while fighting Japanese colonial rulers.

There have been other horse-riding leaders, including Russian President Vladimir Putin, who was photographed riding a horse bare-chested, and Turkmen President Gurbanguly Berdimuhamedow, who took part in horse races and erected a massive monument featuring his likeness atop a golden horse.

KCNA said Kim also visited nearby construction sites in Samjiyon County and complained about U.S.-led U.N. sanctions imposed on his country because of its nuclear and missile programs.

“The situation of the country is difficult owing to the ceaseless sanctions and pressure by the hostile forces and there are many hardships and trials facing us,” Kim was quoted as saying. “But our people grew stronger through the trials and found their own way of development and learned how to always win in the face of trials.”

Kim also said “the pain the U.S.-led anti-(North Korea) hostile forces inflicted upon the Korean people … turned into their anger,” according to KCNA. “No matter what persistent efforts the enemy make, we can live well with our own efforts and pave the avenue to development and prosperity in our own way.”

North Korea has been slapped with 11 rounds of sanctions since 2006. The sanctions have been toughened since 2016, when Kim began conducting a series of high-profile nuclear and missile tests, and they include a full ban on key exports such as coal, textiles and seafood and a significant curtailing of oil imports.

During his second summit with President Donald Trump in Vietnam in February, Kim demanded the United States lift the newer and more biting sanctions in return for dismantling his main nuclear complex, a limited denuclearization step. Trump rejected that, and the summit collapsed without reaching any deal. The two leaders held a brief, impromptu meeting at the Korean border in late June and agreed to resume talks.

Their negotiators met in Sweden earlier this month for the first time since the Vietnam summit, but the talks broke down again. North Korea blamed the U.S. for the breakdown and threatened to resume nuclear and long-range missile tests.

North Korea’s lifting of its self-imposed moratorium on major weapons tests would be a blow to Trump’s reelection campaign, as the president has boasted that the moratorium is a big foreign policy achievement.

Some experts say North Korea is not likely to carry out its threat to restart nuclear and long-range missile tests because that could scuttle diplomacy with Trump and dim the chances of winning sanctions relief.

Trump has downplayed the significance of North Korea’s recent series of short-range missile tests. But the European members of the U.N. Security Council earlier this month urged Pyongyang to abandon all weapons of mass destruction and engage in “meaningful negotiations” with the United States.