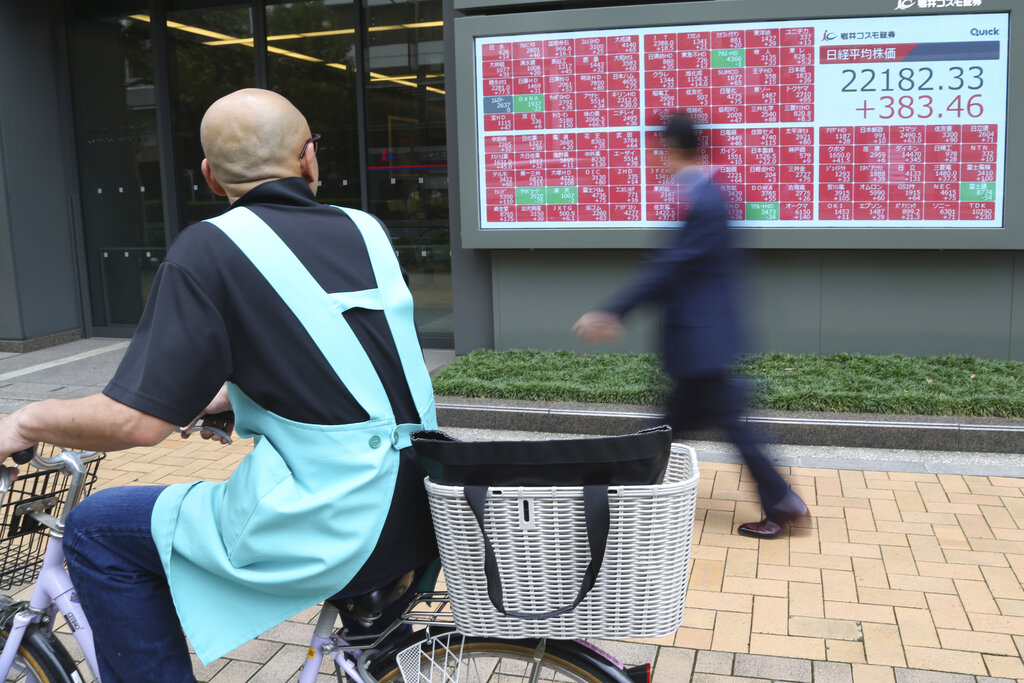 A man looks at an electronic stock board of a securities firm today in Tokyo. Shares are mixed in Asia after a wobbly day of trading on Wall Street. Japan’s Nikkei 225 index jumped 1.8 percent as it reopened from a public holiday and investors caught up on the news of a preliminary trade deal between China and the U.S. (AP Photo/Koji Sasahara)

Stocks rallied after officials announced a preliminary agreement Friday following the latest round of trade negotiations between the U.S. and China. But optimism over the agreement appeared to be fading this week.

Today, investors will keep an eye on earnings reports from major banks including JPMorgan Chase, Citigroup, and Wells Fargo.

The truce between Washington and Beijing calls for the U.S. to suspend a planned hike in tariffs on $250 billion of Chinese goods that had been set to kick in today. Beijing, meanwhile, agreed to buy $40 billion to $50 billion in U.S. farm products.

“That said, the above-mentioned items are no doubt the lower hanging fruits in attempting a deal between the two sides. Few are likely ruling out the possibility that there could be more twists and turns in this matter of U.S.-China trade conflict,” Jingyi Pan of IG said in a commentary.

The U.S. did not, however, cancel plans for more tariffs in December and the sticking points of intellectual property and trade secrets still hang over the dispute. And the overall picture hasn’t changed for companies, which are still holding off on forecasts and investments because of the uncertain trade situation.

In other trading, benchmark crude oil fell 59 cents to $53.00 per barrel in electronic trading on the New York Mercantile Exchange. It lost $1.11 on Monday.