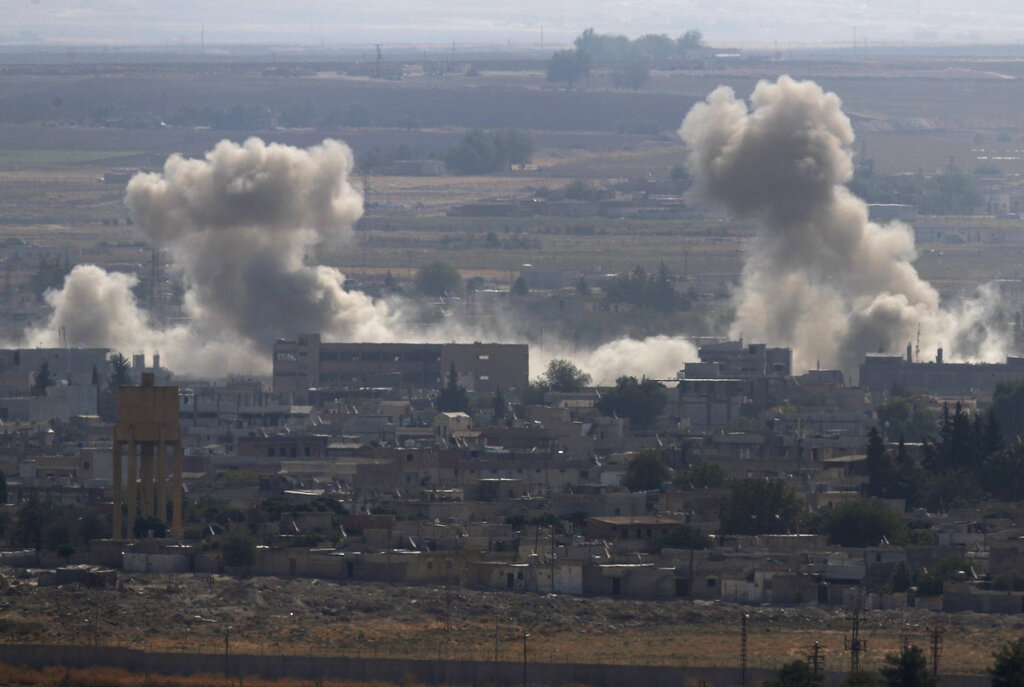 In this photo taken from the Turkish side of the border between Turkey and Syria, in Ceylanpinar, Sanliurfa province, southeastern Turkey, smoke and dust billows from targets today in Ras al-Ayn, Syria, caused by bombardment by Turkish forces. Turkish artillery today pounded suspected Syrian Kurdish positions near the town in northeast Syria amid reports that Kurdish fighters had retaken the town as Turkey pressed ahead with a military incursion that has drawn widespread condemnation. (AP Photo/Lefteris Pitarakis)

WASHINGTON (AP) — Targeting Turkey’s economy, President Donald Trump announced sanctions aimed at restraining the Turks’ assault against Kurdish fighters and civilians in Syria — an assault Turkey began after Trump announced he was moving U.S. troops out of the way.

Britain’s foreign secretary says it has suspended arms sales to Turkey for items that could be used for its ongoing military incursion into Syria.

Dominic Raab criticized Turkey for a “reckless” action that “plays straight into the hands of Russia” and the Syrian government.

A Russian envoy for Syria says that Moscow will not allow Turkish and Syrian government forces to clash, underscoring his country’s role as de facto power broker in the conflict amid a U.S. pullout.

Alexander Lavrentyev, presidential envoy for Syria, told Russian state news agencies today that “no one is interested” in potential fighting between Syrian government troops and Turkish forces that entered Syria last week. Lavrentyev said Russia “is not going to allow it.”

Lavrentyev confirmed that Kurdish leaders and representatives of the Syrian government held talks at a Russian military base last week but said that he was not aware of any results.

The main Kurdish-led force in Syria says it has lost 23 fighters in clashes with advancing Turkish-led forces over the past day.

The Syrian Democratic Forces says today that the casualties were inflicted over the past 24 hours in fighting concentrated around Syria’s northern border.

The group’s statement said that the deaths occurred at several flashpoints including Ras al-Ayn where 11 SDF fighters were killed, and seven in Tal Abyad.

The SDF said that 39 of its fighters were also wounded in the fighting.

On Sunday, the group said at least 45 fighters had been killed since the start of Turkey’s invasion into northern Syria, now in its seventh day.

The United States on Monday called on Turkey to stop the invasion and declare a cease-fire, and Trump is sending Vice President Mike Pence and national security adviser Robert O’Brien to Ankara as soon as possible in an attempt to begin negotiations. Pence said Trump spoke directly to Turkish leader Recep Tayyip Erdogan, who promised not to attack the border town of Kobani, which in 2015 witnessed the Islamic State group’s first defeat in a battle by U.S.-backed Kurdish fighters.

“President Trump communicated to him very clearly that the United States of America wants Turkey to stop the invasion, implement an immediate cease-fire and to begin to negotiate with Kurdish forces in Syria to bring an end to the violence,” Pence said.

The Americans were scrambling for Syria’s exits, a move criticized at home and abroad as opening the door to a resurgence of the Islamic State group, whose violent takeover of Syrian and Iraqi lands five years ago was the reason American forces went in the first place.

Trump said the approximately 1,000 U.S. troops who had been partnering with local Kurdish fighters to battle the Islamic State in northern Syria are leaving the country. They will remain in the Middle East, he said, to “monitor the situation” and to prevent a revival of IS — a goal that even Trump’s allies say has become much more difficult as a result of the U.S. pullout.

The Turks began attacks in Syria last week against the Syrian Kurdish fighters, whom the Turks see as terrorists. On Monday, Syrian government troops moved north toward the border region, setting up a potential clash with Turkish-led forces.

Trump said Turkey’s invasion is “precipitating a humanitarian crisis and setting conditions for possible war crimes,” a reference to reports of Turkish-backed fighters executing Kurdish fighters on the battlefield.

The Kurdish forces previously allied with the U.S. said they had reached a deal with President Bashar Assad’s government to help them fend off Turkey’s invasion, a move that brings Russian forces deeper into the conflict.

In his sanctions announcement, Trump said he was halting negotiations on a $100 billion trade deal with Turkey and raising steel tariffs back up to 50 percent. Trump also imposed sanctions on three senior Turkish officials and Turkey’s defense and energy ministries.

“I am fully prepared to swiftly destroy Turkey’s economy if Turkish leaders continue down this dangerous and destructive path,” Trump said.